by Sara Shalom about a year ago in fiction
Report Story

A Gangster's Girl On the Run 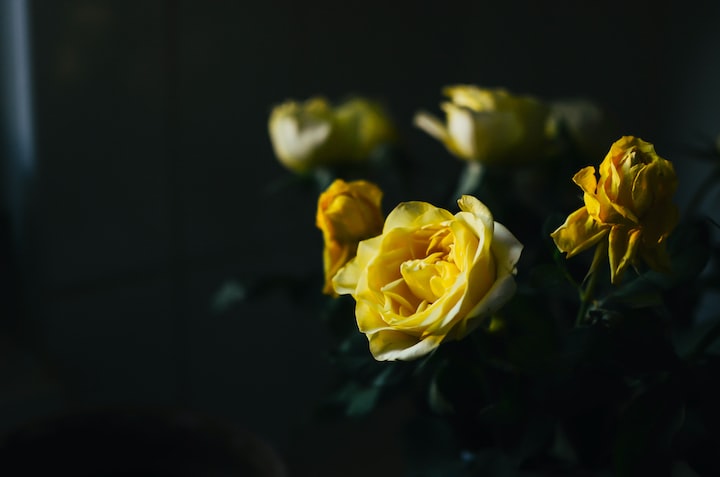 Photo by Chi Pham on Unsplash

Bertie crouched like a snarling, feral dog atop a wooden shipping crate, slashing a switchblade back and forth. Dust motes swirled through the frigid air in blinking stripes of light, as the boxcar jostled over each railroad tie. Ka-chunk. Ka-chunk.

Three hobos crowded a far corner. “Gotta jump, boy!” the eldest yelled at her, grubby gloves raised. “Line ends at Centralia. Bulls’ll get us all!”

He kept an eye on her, as the other two heaved the sliding door. Cold wind blasted. Snow-covered trees whipped by at dizzying intervals. The younger men watched, gauged, and leapt: one, two.

The old man inched to the gaping space, shouting over the racket. “If you hate company so much, stay hid next time! Bend your knees, or they’ll break!” He turned. Paused. Vanished.

The whistle blasted-- lightning to Bertie’s throbbing head. She pocketed the knife, scrambled down, faced the shrieking cold, spotted a tree gap, and jumped.

Head tucked, legs folded, she toppled through mud and slush; scrambled to hands and knees, and clawed for the unfamiliar cover of branches, bark and brush. There, she leaned against a tree and sucked shallow, bitter breaths until the smog cleared.

“Shake a leg,” she said, eying the setting sun. Teeth clenched, brushing aside pain and fatigue like a prize fighter, she trudged after the already distant train, grateful for her disguise. Better to look like a bum than a moll on the run. Besides, in this weather, she’d take pants over stockings any day. Still... skinny, wet, hungry, and hurting, she’d find shelter tonight or freeze.

Not that surviving the night would matter much if somebody caught her and snitched. By now, word would be out all over Chicago. It was just a matter of time ‘til goons from both gangs started looking down the line. And they’d know her when they saw her.

She was accustomed to trolleys and taxis, bands and brawls, smoke and sewers. Big city life was wild, but she’d known the rules and rhythms of that jungle. This wildness was something else. Each drip and thump, scamper and snap fed her imagination; conjured hungry wolves, ten-foot bears, drunken tramps, club-swinging railroad bullies, and worse.

“Stop it!” She hissed, slapping one cheek, then the other. Her head pulsed with pain. Good. Pain would keep her present; keep her moving.

She wiped her nose on one filthy sleeve, recounting all the pains she’d endured. Not cuts-and-bruises pain. Real pain. The type that offers the world on a platter, all the while clawing away at your soul. The type that rips out your heart and demands you keep on breathing. The type that forces you to smile while your whole life is on fire.

But from those ashes, she had lit her own match. She was blazing her own path now. But if she didn’t keep moving, it’d be her funeral.

Of course, a funeral had started this whole thing. Chicago was glitz and grime, filth and fury, and she’d been smack in the middle of it all. The market crash had brought ruin to most, but for some, life had never been more thrilling. Jazz and gin mills, dancing and danger. Chaos suited Bertie just fine.

Just two days prior, she’d practically been American royalty, engaged to one of the North Side Gang’s most promising protégées, Frankie Romano. She knew his work was dirty, but why should she mind? If he didn’t do it, some other egg would, and she preferred sapphires to soup lines. She kept her nose out of his business, and he kept her nose powdered. Besides, she really liked him. Handsome, smart, light on his feet and quick to tell a joke; he’d never knocked her around or put her down. She knew he lied sometimes, but that was to be expected. As long as he kept coming back and moving up, she’d do her best to keep him happy.

She’d been planning a romantic dinner for that evening. He promised to arrive at her apartment by eight, and she wanted everything keen. So, she stopped at Schofield’s Flower Shop to buy roses for the table. Yellow, his favorite. Of course, the fact that most of the North Side’s criminal activity took place just above Schofield's was a bonus. If Frankie happened to be around, they might run into each other.

She’d only been inside a few minutes, selecting blossoms one by one, when door bells jangled. Two men, in crisp suits and remarkably shiny shoes strolled to the counter. These were not North Side gangsters. One hoisted a leather case onto the counter, and dangled a white slip in front of the shop-hand. The boy blanched and backed toward a side room door. “I’ll get the boss,” he said, voice shaking.

Bertie knew she should leave, but curiosity wouldn’t let her. Plus, nobody would hurt her. She was Frankie’s gal. She focused on the flowers, pretending not to notice the men.

Schofield himself emerged, followed by the trembling clerk. He nodded to the men, took the slip, and read it.

“Is this supposed to be a flower order?”

The man smirked. “You do sell flowers here, do you not?”

“Good. Our employer has sent us to place this order.”

The man leaned in. “Not any more. You just ain’t heard, yet.” He straightened. Sniffed. “Mr. Capone sends his condolences, as expressed by this generous contribution toward flower arrangements.” He tapped the briefcase. “Now, pick up your pen and your little notebook there, and write out the order.”

Schofield seemed to weigh his options. Finally, he glanced at his assistant, and nodded. The young man grabbed a small, black book. Turned to a blank page.

His assistant winced. Scribbled the name.

The gangster pocketed it, then pushed the briefcase closer. “Twenty Gs. For your trouble.” He tipped his hat, turned, and strolled out the door.

His silent companion followed, paused, plucked the fallen rose from the floor, and handed it to Bertie with a wink.

A rabbit raced through the snow right in front of her, snapping Bertie’s awareness back to present. The air was crisp and fragrant, a far cry from the cauldron to which she was accustomed in the crowded city. Each inhalation blasted her constricted chest with an icy reminder of how alive she was. How alive she wanted to stay.

Legs aching, blisters forming, she balled fists and picked up the pace. Events after that moment in the flower shop pelted her memory in vivid, machine-gun bursts.

Placing the flowers back inside the bucket.

Floating, dreamlike out of the shop.

Swapping a plumber his outfit for one of Freddie’s.

Tearing a bedsheet into strips.

Squatting in the alley behind the flower shop.

Shoving that pistol between the assistant’s ribs. Snarling in his ear.

The eternity his shaking hands required to open the safe.

Binding her breasts with torn bedsheets, lined with crisp one-hundred-dollar bills. Stuffing more bills into the toes of the plumber’s old boots.

Shrugging on his sweat-stained shirt and filthy jacket. Tightening his belt. Her belt, now.

Skulking through the train yard.

Hiding in a boxcar.

Voices in the boxcar.

Standing on a crate.

Centralia was much smaller than the city she knew, and it wasn’t difficult to locate the business district. Shrouded in a moonless night, she followed her gut to a grocer, intending to break in for food and warmth.

She kept to the deepest shadows, creeping behind the building, hoping for a back door or window.

Bertie had never driven before, but she’d been a passenger often enough. She made a silent, desperate wish and ran her hands over the frigid hood, down toward the bumper, and found what she sought.

She lifted the crank’s strap off its hook and slipped it into place. Then, quietly as possible, she heaved.

Maybe the mechanism had been well-oiled. Maybe anxiety rendered her strong. Either way, the crank turned with relative ease.

The truck choked to life.

The clamor of one engine on a quiet street seemed louder than a five-car wreck in the city. Bertie scrabbled to the driver’s door and hauled herself in.

Movement caught her eye. She stifled a scream.

A fat raccoon, probably pregnant, waddled for cover behind a pile of empty fruit crates.

Bertie exhaled, tears brimming. She seized the gear shift, stepped on the clutch, and steered into the vast unknown.

Sara Shalom's fiction and poetry span numerous genres. Her non-fiction work focuses on Integrity, Intention and Inspiration. In addition to writing, she is a successful actor, musician and visual artist.

More stories from Sara Shalom and writers in Criminal and other communities.