As the Crow Flies

by Marisa Keller 8 months ago in fiction 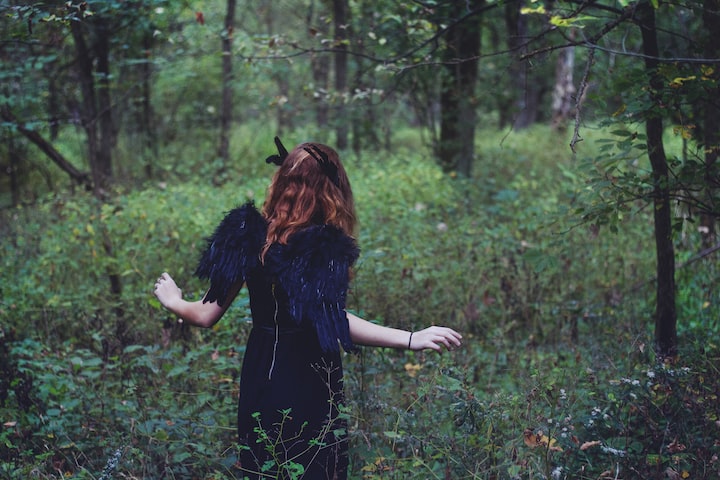 Photo by Alex Grodkiewicz on Unsplash

The swift murder of crows made its way south chasing a determined cloud. From below, an object shimmered and the group swirled to investigate, one screaming to alert the others. Like a funnel in a snowstorm they descended toward the object, purposely missing a great horned owl rising from the prize she’d already won. The huntress powered through the crowd with a small creature draped limply in its talons. The crows formed an attack frenzy, screaming and cawing like a room full of auctioneers, darting this way and that, up and down. The owl sniggered as it flew away, only bothered by the incessant noise that broke its reverent early morning silence. Before sunrise, three fluffy owlets would eat.

The interruption of the owl preoccupied the crows and they followed her, forgetting the reason for the fuss. The owl perched at a distance atop a tall pine to assess her catch. At once there was quiet, each crow landing thoughtfully in a separate tree, still close enough to notice the flicker of a tail or ruffle of a feather. They were a team, yet easily distracted by sparkly things and fiercely loyal to humans they’ve chosen to join their murder.

As the others slowly moved on, they followed each other one-by-one like the cracking of thin ice as it melts. One crow stayed back. Her head jerked toward the others and then back toward the light from the sparkle in the woods. As the sun rose, that beam of light reflected the curiosity in her eyes. Descending for a closer look, she hopped and paused, quietly pecking at the leaves in her path.

The metal looked like a spring from a distance and was partially covered in earth. She pecked thoughtfully. It was bulky and shiny. She pecked harder until her beak descended through something fleshy. She scratched and pecked at it feverishly, neurotically cocking her head to check behind and to her sides, she’d found a feast. A fierce wind picked up, slowing her progress.

She heard footsteps to her right and she pecked more vigorously until they were just upon her. A large round piece of the silver metal broke loose as the wind blew hard, clearing the leaves. She embraced the round treasure in her right claw and flew off. A blue Nike sneaker, the kind you buy on sale at Walmart, stopped abruptly at the border of the scene and the wind blew the pages of a roughly cared for notebook with a distinctive black cover open wide, releasing several crisp one hundred-dollar bills. The notebook blew open to a page with a list of numbers and a total at the bottom, twenty-thousand dollars was written in script with an exclamation point and underlined with three dark uneven lines.

Irene gasped, and brushed a wisp of her gray bangs to the side as she leaned over astonished. Poking up from the ground accusingly, she saw a bloody finger. The blood was brown, dried and disheveled, like bread crumbs from the bottom of the toaster, and coated the outside of the skin like a tan. It caught her attention acutely, more than the money that had settled in the distance.

Startled, she caught herself from falling backwards and considered her surroundings. She needed money. She had gone on her daily hike to consider a solution. A mortgage foreclosing, the bills mounting. Hank had disappeared. The silver alert was apt, but benign. “Missing, Hank Ringwald, 73, last seen on Friday, believed to be in extreme danger and needing medical assistance. Driving a green Buick LaSabre.”

Meanwhile, in a part of the woods silenced by a trellis of thick pines, the crow placed her find gently on the ground amidst a small pile of trinkets. Beads, small keys, her favorite tiny bell, the end of a pencil, and a crystal. She would deliver something to Irene’s granddaughter later that day. The newest treasure was larger in size than the others, but seemed more delicate. Inside a glass case she saw several sparkling crystals with lines and ridges. It was moving. It frightened her at first and she pecked at it until it flipped over. A smooth silver back looked like a coin with writing. She scratched at the piece until it was buried partially beneath her collection and she headed back to investigate the flesh.

She flew to the scene and perched in a nearby tree. To her dismay, the area was crawling with people taking photos, cars with bright lights and noise, her least favorite. She spotted the blue Nikes again, and decided it was best to move on. As she left, she swooped down low over the scene to get a closer look. What she saw enticed her, but she knew there was no chance of a meal. In an instant, she was gone.

Irene had witnessed something horrible and she wiped the startle and subsequent tears from her eyes. A police officer placed a thick wool blanket around her shoulders. She sat on the tailgate of the police SUV and tried to catch her breath. It wasn’t Hank. Thank god, but it was someone she recognized and she pretended not to notice.

The police had scoured the area and found no clues. Just then, someone yelled, “here, over here.” About a half a mile away was a green Buick LeSabre. Irene fell to the ground terrified what she would see inside, but it was deserted.

The kind officer put his arm around Irene and suggested he drive her home. The sun was setting and it was getting cold. She climbed quietly into the passenger seat of the SUV and they made their way out of the woods. A pair of crows watched silently from the distance.

The next day, there was no mention of the man in the woods on the news. Irene turned off the TV and tried to shake off her feelings of dread so she could enjoy the one thing she loved more than all else. Her granddaughter was coming for a visit.

She sat at her kitchen table trying not to ruminate. She checked the cuckoo clock in the den nervously, a gift from her daughter, True. Her son-in-law, Curt, was a scoundrel, selfish and cruel. He traveled much of time. Her daughter was kind and loved nature, but constantly on edge awaiting his forbidding behavior. She spotted the clock at a roadside wood carver’s shop and bought it for Irene. It was decorated with colorful birds and topped by a cuckoo and two ravens. Inscribed on the bottom was the family mantra, “Home, as the crow flies.” The mantra reflected her family’s many travels. Avid hikers, each one followed their own road less traveled, often choosing the circuitous route over the well-worn path.

Irene heard a car in the drive, she stood up quickly and knocked over the salt and pepper on the table. She scrambled to pick everything up. It was True and Livia. She had called her daughter the night before and told her the story that unfolded in the woods. True had some loose ends to tie up and brought Livia for her regular visit despite the frightening news.

She seemed nervous, yet grateful that Curt was gone somewhere again. There was no telling when he would show up, his pockets full of cash and sour with liquor.

Livia jumped into her grandmother’s arms with an embrace and a smile that turned everything right. “Where’s Boompa?” she asked. “He’s not back yet,” she replied, looking sideways at her daughter.

True hugged her mom and Livia as she headed quickly toward the door. Livia and Irene sat down with hot chocolate and tea. Livia wanted to spend time in the yard, tending the garden and the flowers with her grandma. “I hope I see my crow today,” Livia said. “I love it when she brings me treasures.”

One hot summer, Livia had been sitting in the back yard enjoying a pear and a glass of lemonade. A large black crow with one small white feather on her right wing landed nearby. She offered the crow a few pieces of her pear gently throwing them her way. The crow slowly made its way toward Livia and then abruptly flew away. A few minutes later, she returned with a small bell and dropped it next to Livia. This became their dance.

Irene brought out the cookies she made the day before and they shared a few stories from the week. Then they went outside to the garden and picked zucchinis, ripe tomatoes, and zinnias for the table. A little weeding around the house and Irene brought out strawberry lemonade. Sitting on the steps Livia saw her crow out of the corner of her eye. She hopped and pecked at the edge of the woods until Livia approached. The crow pecked hard at a shiny spot buried in the leaves. It flipped over and Livia could see it was the head of a watch. The crow pushed it toward Livia until she picked it up. She looked at the front and back quickly. Her eyes widened and she thanked her crow with her regular bow and curtsy, offering her a half a pear, then breathlessly running to her grandma. The crow flew up to an old oak tree to watch.

“Grandma, look what the crow brought! Isn’t it Boompa’s watch?” she asked.

Irene started to cry. “What’s wrong grandma?” Livia asked. On the back of the watch was the inscription, “Home, as the crow flies.”

“Boompa’s been missing Livy,” she said. Just as the words left her mouth a dozen or more crows began screaming and cawing not far into the woods. It was such a ruckus they couldn’t hear each other talking. They looked up and saw the crows diving from the sky into the woods. Livia’s crow flew near Irene and Livia, pecking and hopping toward the woods as if to beckon them.

They carefully made their way into the woods. In the distance an old man leaned against a large pine tree filled with chattering crows. Livia pulled on the edge of her grandma’s shirt and pointed. The man looked exhausted and was leaning hard with his eyes down cast. A large envelope protruded from under his arm. It was torn and wrinkled.

“Home, as the crow flies,” was all he said as his back slid down the tree with exhaustion. The envelop fell to the ground and thousands of dollars covered his feet.