A Shift in the Fabric

A young woman mysteriously appears in a nursing home after hours. 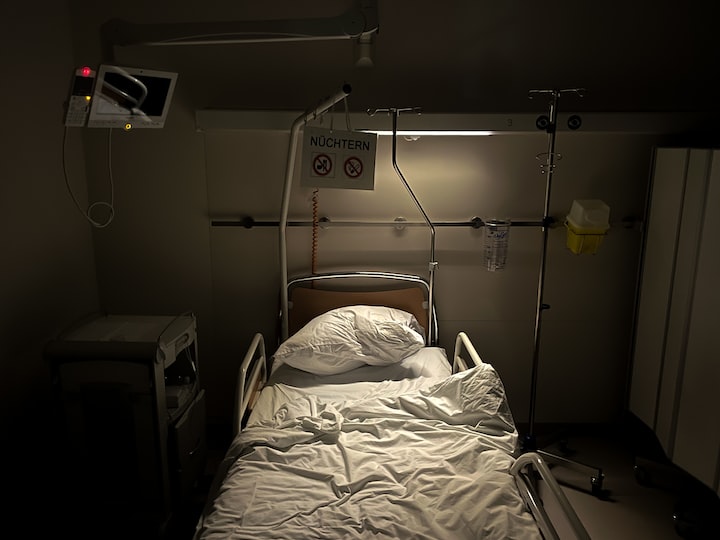 Photo by Frederic Köberl on Unsplash

Aia opens the door of Sunset Manor Personal Care at a quarter to midnight. A gust of icy air pushes in behind her as she pulls off her blue knitted beanie, releasing an explosion of curly hair. Her large brown eyes scan the lobby: an empty, cluttered receptionist’s desk, a faded yellow couch. It smells of soup and mothballs.

Aia stuffs the beanie into the pocket of her thick blue coat. She turns right, scuffing her chunky black boots over the mottled brown carpet. She walks by a set of elevators and presses her palm over the lock of a side door, opening it to reveal a set of stairs. She climbs one flight and unlocks the next door, quietly pulling it open.

Aia is met with a gentle melody of beeps and whirring machines. She gazes through the glass panels of the nurses’ station, where a single nurse has fallen asleep on a book. She strides past him and down the hospital-like hallway to the first door on the left.

She pushes on the door and lets it swing open. A feeble old man lies under a thin white blanket, his chest rising and sinking. Aia approaches the bed. She studies the man’s face, eyeing his bushy brows, long nose, and crinkled mouth.

She pulls up a chair and draws a small black notebook out of her coat. She bends it backward at the spine and places it on her lap. With her gaze fixed on the man, she touches her thumbs to his cheekbones. She closes her eyes.

Aia feels her inner self dissolving and rearranging, settling atop a sandy picnic blanket by roaring beach waves. The man is five years old, sitting with his legs folded beneath him. His mother, dressed in a swooping straw hat and white linen pants, draws letters in the sand with a stick.

“What does that say, Bennie?” she asks, pointing at the letters.

The mother’s voice begins to fade. The world around Aia dissolves into muddled grains of color.

Aia opens her eyes. She lifts her left thumb off Bennie’s cheek and draws out a warm, aqueous goo rapidly changing color. Once she pulls the last of the ooze from Bennie’s skin, she brings her thumb over the notebook and lowers it into the pages. The substance sinks onto the paper and dissolves.

Aia sits back and waits. A message appears in the notebook:

This one will do nicely.

A small sigh escapes Aia’s lips. She stands up and strides into the hall. She approaches the very next door and pushes it open.

“I know what you are,” the woman says.

“Don’t worry, I’m the only one conscious.”

“Oh come now, dear, sit. I have no one to chat with anymore. Do me the favor.”

“—To talk to humans? Never mind that. I have some things you need. Sit.”

Aia pulls out a chair and sits.

“Aia.” They watch each other.

“You’re young,” Lea announces. “And tall. And you stick out like a sore thumb.” Aia touches her hair. “How much time do you have?”

“How do you…?” Aia looks at the clock on Lea’s bedside table. “Nine minutes.”

Lea raises her eyebrows. “They expect you to retrieve enough memory in that time?” Aia nods.

“My my. They must have had very little energy to send you over. Let’s get cracking.”

“I’m not asking you to take, my dear. I’m asking you to give.” Aia furrows her brow. “Capters can take memories, but they can also restore them. I’m sure your kind never told you. It complicates things.”

Aia stands up. “I don’t have time for this,” she mutters. Lea catches her wrist with a steely grip.

“Careful now,” Lea says quietly. “I’ll scream and wake up every single Sunset Manor resident. If this goes well, your family will have enough memory to last them for a thousand more years. Sit.”

Aia lowers herself back into the seat. Lea releases her wrist.

“I need you to restore a memory for me,” Lea says.

Aia glowers at her. “How did you lose it? Naturally?”

“Quite unnaturally, I’m afraid. I knew another Capter once. Her name was Sylvie.”

“If it was taken unnaturally, how could you possibly remember having it? Or know that this Sylvie took it?”

Lea sighs. “I met Sylvie in 1961. I was in the hospital with my father. She came in to take his memories. I was awake. She spared him. And from there...we became friends. Lovers. Whatever you want to call it. I have many memories of Sylvie. And I believe she took something before she left me.”

“Well...how could I even bring back a memory that’s gone?”

Lea smiles. “Sylvie and I experimented with it a few times. Memories have roots.”

“Yes. You may have been taught that you can extract an entire memory from a human without leaving a mark. But memories leave imprints. A root, if you will. And the big roots can spread and become a part of one’s self. Hell, I think memory is the fabric of the soul.” Lea closes her eyes. “I can feel it in my bones. Sylvie took something from me.”

Aia ponders this. “If I try to recover it, what do I get in return?”

Lea’s gray eyes bore into Aia’s. “As many memories from me as you need. Except...memories of Sylvie.”

Aia checks the clock on Lea’s bedside table. Seven minutes left. “How would I even restore it?”

“You enter my soul. Stifle the desire to touch the first memory you see. Find the empty root. It will look ugly, twisted. Reach out and touch it.”

Aia and Lea look at each other. Suddenly, Aia places the heel of her palms on each of Lea’s cheeks. Lea smiles.

“Looks like we’ve got a deal,” Lea says, and closes her eyes.

Aia’s inner self dissolves. But this time, she doesn’t reappear in another place and time. She floats in a sea of color. Enormous web-like columns stretch in every direction, displaying different sequences. Baby Lea walking to preschool with her father. Teenage Lea racing through a field of yellow corn. Middle-aged Lea smoking a cigarette under an awning in the pouring rain. Aia feels herself being pulled toward every column. She shuts her eyes and focuses on Sylvie.

Aia finds herself transported right in front of several dark red craters. Several? She thinks. Sylvie had much to hide.

Aia considers the gnarled hollows, eyeing the largest. Her fingers hover over its scabby surface. She touches the root.

The root splits open and a column of memory shoots out with incredible force. Aia gazes at it in wonder, her fingertips grazing the surface. It feels like rushing water. She lets her hand push a little further into the stream...and further still…

Aia appears in a little apartment with brick walls. Sunlight from a small window spills over 35-year-old Lea, who lies on the floor sobbing into her long black hair. A beautiful woman in an emerald green dress sits on the edge of the bed, her head in her hands. A tin box filled with money sits beside her.

“All this time, y-you were the reason my father is dead,” Lea gasps.

“He was already fading, Lea,” Sylvie says. “Complete memory capture is far more peaceful than any natural death.” Lea wails. “Lea, you must understand. My family would have died. We’re immortal only to a point. We needed his memories to survive. He...he saved us, Lea.”

Lea raises her tear-streaked face. “What right,” she says in cold fury. “What right d-do you have to decide when it’s someone’s time to die? You don’t even know what it’s like to LIVE!”

“This is why I took that memory away. I didn’t want you to suffer. I didn’t...I didn’t know what I was restoring just now.”

Tears well in Sylvie’s eyes. Slowly, she turns her head.

She looks at Aia.

“What are you doing here?” Sylvie asks quietly. Aia takes a step back, eyes wide.

“Another Capter entering Lea’s soul,” Sylvie flips the lid over the tin box and snaps it shut. “Fascinating.”

Sylvie rises from the bed. She saunters toward Aia, tapping her nails on the tin box. “I’m not alive, if that’s what you mean. I’m a figment of Sylvie’s imagination. She placed me in the root of this memory to stop any Capter who tried to restore it.”

“Lea sent me to restore this memory herself, actually,” Aia blurts.

Sylvie stands inches from her face. “Really? Tell me, how old is our Lea now?”

“Well into her eighties, probably.”

“So, she’s had plenty of time to plot, then.” Sylvie walks through Aia, who wobbles and falls to the floor.

“We were going to run away together. That’s what this money was for.” Sylvie approaches the wall and pulls out a loose brick. “Twenty thousand dollars. In 1963. Can you imagine? We were rich. But Lea found out how I got it...rifling through the memories of a few wealthy birdbrains...and wanted nothing to do with it, of course.” Sylvie slides the tin box into the wall and replaces the brick. “And then I ruined everything by restoring that horrible memory.” Aia tries to stand and collapses.

“Lea always wanted to become a Capter, you know,” Sylvie continues. “She went mad trying. I had to leave her.” Aia clutches her chest. “Do you know why a Capter shouldn’t stay in a human’s soul for too long?” Aia and Sylvie’s eyes meet. “You form a bond to the mortal. The longer you stay, the harder it is to return to the world in that little black book of yours. Your immortality...transfers to the human.”

“You could have left earlier, my dear,” Sylvie says. “But curiosity got the better of you, it seems. Curiosity, what a human trait.” A fuzzy feeling washes over Aia. “The transfer is almost complete. Do tell Lea I said hello.”

Aia’s eyelids flutter open. A textured white ceiling flickers into focus. She listens to the gentle beeps and whirring machines. Soft laughter echoes through her mind.

Aia bolts upright. The bed is empty. The clock on the bedside table reads 12:15 am. Frantically, Aia searches her coat pockets, sweeps her hands under the bed, and flips the sheets inside out.

The little black book is gone.

Panic rises in Aia’s throat. She nearly lets out a scream, then spots a piece of paper on the floor. With shaking hands, she picks it up, and reads:

Do not worry about your family. I took great care to transfer plenty of memories to them for lifetimes to come.

My apartment, on the corner of Gardner and 11th, belongs to my nephew now. Visit him and tell him you are my caretaker at Sunset Manor. He’ll let you in. I believe there’s something waiting for you behind a brick in the wall. It will give you a head start on your new life.

I know you don’t yet know what it means to be human. Or, perhaps you do. Helping me, an old woman you’ve just met, recover my life? Giving me what I need to find Sylvie?

That’s the most human thing there is.

Read next: Why "The Innocence Files" is the Most Important Thing You Could Be Watching Right Now