by Brittany MacKeown 3 months ago in Childhood

a museum of love 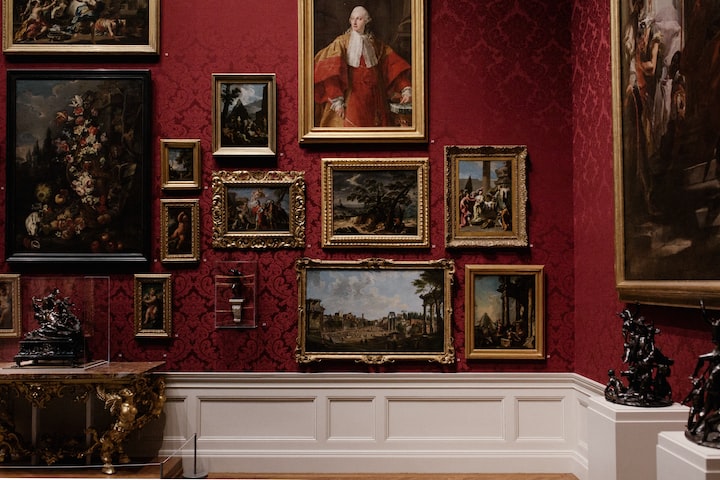 A front porch stoop, badly in need of repainting. The stairs are buckling in the middle from rain and wear and opossums. Blurry figures on the bottom step, taking it up in its entirety. Chattering, laughing, talking. A car pulls up, and a woman emerges, opening her arms for her child to run into them. A chaste kiss for her husband. A hug poorly executed and too tight and too little and too burnt-out.

Reverse the scene. A man climbs out of the driver’s seat. The child runs into his arms. The child is held with love and care and tenderness, unaware of her parents’ descent into a loveless partnership. She snuggles into her father’s or her mother’s arms and wishes they could all be home together. She wishes to wake up with both parents there to kiss her forehead and play with her and watch TV and eat lunch with her. She wishes for things she cannot yet articulate, but she is happy nonetheless. She has no need to articulate anything. She is loved simply by her parents’ constant presence.

A younger child in another room, never responding to her name. The child is not deaf. The mother has checked with the doctor.

She calls her child again. The name rolls off her tongue with practiced, adoring ease.

It is October. The mother is carving a pumpkin. She says, “Hey, come help me carve this pumpkin.”

The child comes running. The mother blinks. The child blinks back.

The mother begins to laugh.

She used the nickname punkin too much. The child thinks her name is Punkin, or in this case, Pumpkin.

We skip ahead a few years. The child is now in kindergarten. She rides the bus to and from school, and her mother waits for her at the bus stop. Sometimes, when her grandparents come to visit, her grandfather replaces her mother at the corner.

The child runs ahead of her grandfather who shuffles home, smiling all the way. It does not bother him. He knows he is slow and cannot keep up with a child anymore.

The smell of sugar filters through the screen door, and the child zips inside. Her mother, startled, asks where her grandfather is. The child points at the door. “He’s coming,” she says and steals a cookie from the cooling rack. Her mother is always baking: cookies, brownies, pies, Rice Krispy treats, lemon bars, chocolate cakes. Her mother only works on the weekends, so she can be home with her child. Her husband teaches at an inner city school, fifteen miles from their house in Kettering, Ohio.

The child does not think about all this. She knows kindergarten: her mean old teacher, her friends, the one bathroom without a lock that two classrooms share. She knows home: her mother baking, her father coming home to see her, her best friend living across the street, her grandparents driving down from Middletown every week. Life is simple, and there’s love in simplicity.

Our next scene opens on a cul-de-sac in a suburb offshoot of Austin, Texas. The child is seven years old and hanging out with kids four years older. They are in fifth grade and hate that some first grader is tagging along, hijacking their coolness. The child plays with them every day, never moved by their insults or jabs at her. She knows they do not hate her, no matter how much they try to show it.

She invites them to her birthday party. None of them come.

The child is overjoyed. A small birthday means nothing to her; she doesn’t mind it. Her cake tastes good. Her friend is here. She has several presents from her parents and one very special one from her friend. Love comes in many shapes and sizes, and it tastes even sweeter after bitter disappointment.

Another birthday. This one for the child’s friend, Anasol.

Anasol lives across the street in a white stone house that always smells of the food her mother cooks. They are Latinx, their dark skin like a beacon that attracts snide comments and narrowed eyes. They do not like the white families that surround them, that have decided they are criminals. Just another set of illegal immigrants biding their time with all their saved tax dollars.

The child stands in Anasol’s living room, staring at the TV. Everyone who didn’t come to her birthday party is there, surrounding her, and she tries not to be jealous. She forgets about it when Anasol turns on music. A dance party ensues, and the child is swept up in the beat and laughter and Anasol’s voice.

Anasol has moved away too. She leaves behind nothing of the legacy she began—the strange beginnings of the child’s unfurling sexuality. The child keeps that letter for years, even after she can no longer remember Anasol’s face or the way she smelled like warmth and family and red sauce. The child misses her and so does the woman the child has grown into.

Every summer, the child and her mother and her little sister drive twenty-one hours up to Middletown, Ohio. The child’s grandparents are the same ones who came over every week. They live in a two-story house with a finished basement, and they plant lilies in the spring and watch them bloom in June. They have a dog, a mutant Maltese three times the size he should be and white as the toilet paper he steals from the bathroom.

At the grandparents’ house, the child and her mother and her little sister spend two weeks. Sometimes, the child’s father tags along but not often. The child’s grandpa hates her father, and her father senses that.

It does not matter to the child, even as she grows older and her mood darkens. She will sit for hours in the basement where she sleeps on a pull-out couch, listening to music and watching two gay men kiss in strange shipping compilations on YouTube. It excites her more than it should. She isn’t sure what it means. She can’t be gay, can she?

The child only answers to her grandpa. Her mother or grandma might call down the stairs and coax her out to the mall or her great-grandparents’ house or a spa for a pedicure. The child answers like a cornered animal; her voice is whetted with frozen iron. But her grandpa will call down to her from the top of the basement staircase and entice the child with pasta or chicken nuggets. She will finally step out into the light of day, pale as a vampire and twice as fierce. She has little idea what’s going on with her. Her mother assumes it is simply teenage rebellion.

Her grandpa knows. He fears it. He has seen it in the child’s father, and now to see the reflection in his beloved eldest grandchild constricts his throat. His love is the only kind the child understands, and she appreciates it long after she and her mother and her little sister drive twenty-one hours back home.

The child’s backyard is mostly dirt with sparse patches of grass and dandelions that her mother tells her not to blow on. “They’re weeds,” she says, her voice scoffing, scouring like the rough side of a dish sponge.

But the child does anyway. The white seeds blow away on hot summer gusts, past gray fences and brown roofs and into the ombré blue sky. Sometimes, she stands out there with her friend, a brown girl named Kim. People think Kim is Mexican, but she’s Filipino or half, but her last name is Lorenz. “Not Lorenzo,” she says, annoyed when somebody looks at her and around here brown means Mexican and she’s brown and her last name is Lorenz so she’s Mexican. But she’s not.

They talk about the wall separating them from the world. They wonder if maybe they’re in the Matrix—some virtual adaptation of the YA novels they can’t put down, ones with less machinery and more magic and curses and unbidden love. They do not understand the word for that glass wall: depression. They don’t understand chemistry yet, or how your brain can get sick with a cold that never leaves. It’ll lessen, sure, when the sun shines or when they talk to each other or look at each other and wonder what that feeling is inside them.

The child does not realize she is in love with the girl who is not Mexican. She does not realize her destiny is to always do this, to forget to unravel the mystery of her own feelings before tackling someone else’s. It doesn’t matter though. The child loves her, even if she doesn’t realize it.

The child’s parents divorce. She is glad that they finally have because there is finally peace in her house. Peace and clear weather. Her father, when he was home (which wasn’t often), toted a black cloud around with him, an extra shadow that intruded every part of the house.

Sometimes, every few weeks, her father takes the child to Fazoli’s. What a strange idea for a fast food chain—Italian. They sit and eat there though. Her father with his chicken parmesan; the girl with her cheese tortellini or spicy sausage penne. It’s the only time they have together where her father doesn’t piss her off. She loves him, she supposes. Sort of.

The child finally accepted she was gay one day in biology class. It was a spur of the moment thing, a quick text to her best friend that would soon be her girlfriend. They met after school. Hugged. Her now-girlfriend cried, which was just what the child expected. They both laughed, and she wiped away her girlfriend’s tears. “My soggy piece of bread,” the child said. Her girlfriend laughed again.

The child’s friend did not accept it. She stalked away, red in the face. She said, “I’m not dealing with this bullshit.”

It was funny. The child had to laugh. That was just what she had expected.

Her friend came around eventually. Three years later after life had sent her down the rabbit hole and she had emerged more mature, more like the woman the child knew she would become. The child had already forgiven her friend. She had missed her friend’s red hair, the pieces like burning pressurized rock exploding from a volcano.

Her friend loves the child now, again. Their love is not fragile; it never was.

I also go by my middle name, Renee, but you can call me about anything