The Foolishness of the Lake

by Michelle Devon about a year ago in Embarrassment
Report Story 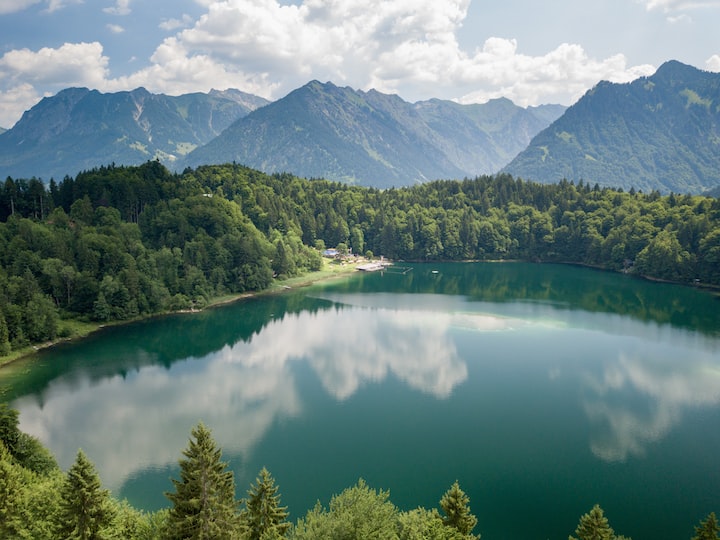 The rays of the sun reflected off the lake surface, in shimmering, brilliant strands. The group of girls stood near the pond, changing into swim clothing after the long hike and horse ride down the path through the woods. The lake was not swimmable, for the water was too murky, too dirty. Not from pollution though, just a natural murky, mud filled lake-hole. While the sun shone brightly on it, and the reflection of the surrounding trees was gorgeous, the water itself stank of fish and dirt and sludge.

However, just a few feet from the lake was a gorgeous natural hot-water spring. The girls from the scout troop were preparing to soak their tired, we tried bodies in the hot springs.

Each girl slipped in, one by one, to the warmth of the crystal clear water. After several minutes of relaxing and gossiping that teen age girls are prone to do, one girl screams, and for no apparent reason, jumps out of the hot spring.

Then a second girl screams, and then a third. Before you know it, the entire scout troop has jumped out of the hot springs and are dancing around in circles, jumping up and down screaming.

Was the water too hot? No, not at all. It was perfect. Instead, it was discovered that the lovely hot-spring was full of small leeches. After a couple had attached themselves to a few of the girls, and the rest of the troop discovered the reasons for their screams, they all managed to hop out of the hot spring and strip their clothes off and start inspecting for leeches.

True story, I swear it. Happened to my scout troop when I was about 12 years old and went to Camp Mary White in New Mexico. While that was comical enough, the funny part for the rest of the gang hasn't been told yet.

Nope, the funniest part for everyone was when the girls began to dress back in their trail clothes.

The lake itself, the one we couldn't swim in, was situated at the bottom of a soft incline down into the lake. We were all standing on the top of the little hill, looking down. The grass on the hill was wet, so we were all careful not to get our clothes wet while putting them back on. One girl, standing at the top of the hill, was fully dressed, except for her shoes and socks. She proceeded to attempt to put her socks on, one at a time, while standing.

Apparently, she was not as coordinated as she'd thought, and she began to lose her balance. Instead of letting go of the sock and possibly falling, she began hopping up and down while trying to regain control as well as keep a hold of her sock. While hopping, she began the descent down the hill, hopping on one foot, holding on to the sock that was partially on her foot, and eventually, tumbling head over heels down the hill—and splashed right into the murky, nasty smelling lake, fully clothed, and still holding on to that damned sock.

I had never felt as foolish in my life as I did standing, fully clothed, in the muddy water of that lake, holding on to that sock.

While this is a true story, I can’t help but look at it as a metaphor for my life. How many times have I been able to save myself from standing in the murky, muddy waters, if I’d only let go of that one thing that caused me to fall in the first place?

Do you have something in your life you are holding onto and refusing to let go? Has your desire to hold onto it caused you to start hopping on a downward slide?

An award-winning author and professional dreamer....Michelle Devon lives on the southern Gulf Coast of Texas with five amazing parrots, and a very tolerant cat. http://michelledevon.com

More stories from Michelle Devon and writers in Confessions and other communities.