He Won Me Over With A Coloring Book 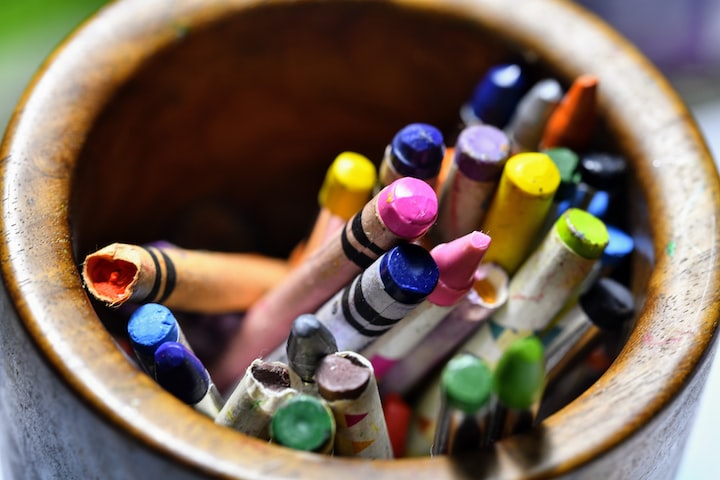 Photo by shraga kopstein on Unsplash

My dad is a rowdy teenager in a middle aged man’s body. I’m not joking. He likes to party with his friends, chain smoke, rides a Harley and lives in screen prints and tennis shoes. He only dresses up for weddings and funerals, that is, if you call darker jeans and a button up shirt dressing up, and has in more than one stage of his life proudly sported a mullet. There’s no filter in his brain and he’ll say things that will embarrass everyone in hearing range. As a storyteller and entertainer by his very nature he’ll tell you the same story over and over again. I can guarantee you’ll laugh every time.

As unconventional as he is, I consider myself lucky. I’ve never had to wonder if my dad loved me because he’s shown it both in words and actions for as long as we’ve known each other. Seems natural that a father would love their child right? But that’s the kicker, there’s nothing biological to tie us together. A stranger seeing us together would never know but he’s not my birth father. We have similar personality quirks and my son is even a tiny hell raising version of him. Whenever the boy is getting into trouble I tell my dad he inherited that nonsense from him. I often tell people that my daughter got her eyes from him. We’re so close that I often forget that he’s not blood related.

I met him when I was three. My mom had me very young so she was barely 19 and he was 21. Still kids themselves both fresh from divorces and each with a toddler. I couldn’t tell you how long they dated before she introduced him to me. It may have even been their first date but that day he came bearing gifts. Pretty normal when you’re trying to impress your girlfriend I guess. Make the kid happy and the mom should be happy too right?

So he comes in with a jumbo sized coloring book and a pack of crayons. That’s all it took to win me over. I’m sure it hadn’t meant much to him at the time. He just picked up something that he thought a little kid would like but I fell in love with it. Though my memory is probably grossly exaggerated I remember this thing being the monster of all coloring books and certainly the most impressive one I’d ever owned personally.

From that moment on I hung on to every word he said and he never treated me any differently than he did his own son, even in those early days. My mother and I were introduced to his parents who we right away started calling Mamal and Papal. They weren’t even married yet and his family had already accepted us too.

It didn’t take them long to make it official and he became my stepfather. Soon after that I asked if I could call him dad. I remember I’d been thinking about it for a long time. Whatever a long time means to a five year old anyway. I’d been anxious that he would say no and then one day I just blurted it out while sitting at the bar of a diner waiting for take out. I remember he smiled and said, “well yeah, that’s who I am.”

He was my dad and no one could tell me any differently. I’d even started writing his last name after mine at school, which got me in trouble by the way. My young brain couldn’t understand. This was my dad, why can’t I write his name? So this man, who again had his own child and no blood relation to me at all, decided to make it official and adopt me. I remember being so excited and when I got married I cried a little when I had to change it again.

Even though to me this is one of the most important things that ever happened to me, I think to him it was no big deal. I was his child and always had been. No matter what. It was easy for him to pick up the reins and support me in the way that my own biological father had not, because that’s the kind of man he is. A man who’s rough on the outside and soft on the inside. The wild biker with a tattoo of a skeleton middle finger on his shoulder who also worked two jobs for most of his life to provide for his family. He’s a man who cusses like a sailor but who's never ashamed to tell you he loves you.

I kept that coloring book for years. Hidden away and cherished long after I'd colored on every tattered page that were barely still hanging onto their aged binding. I was well past the age for coloring books when my mom ended up throwing it away by accident, devastating me. I know that’s silly right? But to me that coloring book was the beginning of our lives as a family. My life could have been very different. I could have grown up feeling abandoned not only by my biological father but also by his family who had cut ties with us as well. We could have struggled alone under a single mother’s income. But my dad stepped in with that jumbo coloring book and shared his life with us. I got a dad, grandparents who loved me right from the start, an aunt, and many many cousins. Now he’s a Papa to my children and they love him almost as much as I do and there is never a shortage of coloring books.

More stories from Leigh Ann Tuttle and writers in Confessions and other communities.