Searching for Male Friendship in a Lonely World

by Stephen Phillips 3 months ago in Friendship

Just because you lose them doesn't mean they can't be found 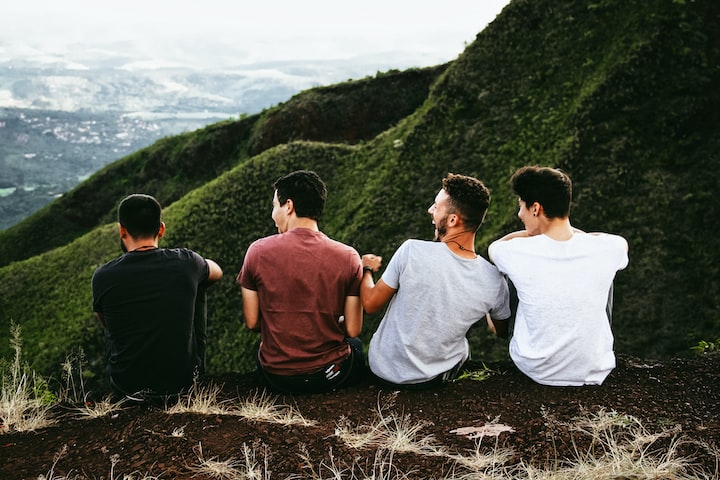 A few nights ago, I met up with a buddy of mine here in Los Angeles. His fiancé had flown to San Francisco while he stayed behind with their dogs, who I sometimes look after. The two of us are close, but not too close. Sometimes I feel like I know his dogs better, and that's why I reached out to him.

We live in the same neighborhood, so we met for ramen only a few minutes from our houses. Afterward, we drove down the street to a beer store with a cool bar inside. The final destination was his place, where we drank Japanese whiskey and listened to Christmas music. We also smoked a joint he brought back from Mexico . That was the time I looked after the pups.

We didn't play video games or watch television. We didn't get drunk, although both of us enjoy that type of thing.

We just talked about life for a while and took the dogs for a walk. It was one of the most special nights I can remember, and it made me wonder why.

I knew I wasn't always missing male companionship in the fullness of my life. Growing up, I had the perfect amount for a private school kid from Texas. Four brothers and no sisters meant pick-up games and constant laughter. Ours echoed in the streetlight darkness, rising until we overflowed.

In college, I had plenty, too. West Point is nothing if not grown from male camaraderie. Four years training and sweating it out with buddies in preparation for war. Upstate and by the Hudson, you get close to men quickly, or you fall behind malnourished.

Still, something happened to me afterward, and I'm just now attempting to unravel it. In the jungle of my thirties, I realized something disappeared. Outside my family, the men in my life went up in smoke. No flames, of course, they vanished quietly. Slowly, I happened to notice they were gone.

At weddings, I found myself next to out of touch groomsmen in dark suits. At reunions, someone always asked, "Whatever happened to that guy?" as we struggled to remember a dude's name. It made me uneasy to see the same, slow decline in my fellow men. They weren't aloof, just unconcerned. They didn't see the importance of saving what could be lost.

Years passed and they were unmoved by my desire for friendship. I told them, but they were focused on steering their ships to the shore. With battles to fight, there were also career moves and attempts at romantic love. Sometimes they intertwined and tangled. Sinking, I was set aside like the offspring of divorce.

"Subconsciously, they have no need of men," a professor of mine would later clarify. "Connection takes a back seat. They have their own tribe to lead and you're not a part of it." If men are protectors, it's the family that comes first. Why risk rejection  or re-live it? The world is confusing enough without risking the unpredictable bonding of our youth.

"It happened to me," my father eventually added. "I'm lonely. I'm looking for someone to return my calls." I mentioned this to my buddy as we finished up the whiskey. His father was a veteran, a survivor, but according to him had stopped fighting long ago.

Men need friends to fight for them, to encourage them, to exist alongside them when life gets going. What we really need is for them to fight with us for a cause. It's a bitter world without this. We want brothers willing to meet us in the dark.

As more jobs and children start appearing, we forget about male friends, and we need to acknowledge this is painful. We need to feel that loss of intimacy while realizing it's changeable. There's still time to bring it back.

There's still time to repair the damages of lost friendship. There are opportunities to make new ones, to travel alongside them, to be the type of friend you can rely on trying your damnedest to find your way.

Maybe that's a problem, too, though. Are we still trying too hard after all these years?

Maybe we should take a cue from women and just sit with each other more often. Stop trying to fix each other. Something tells me that would help us. It would cut down on toxicity and allow us to live more comfortably in our male skin.

I thought about living better and living longer as I sat and hung out with Matt that evening. Turns out he's a keeper, the cold weather kind, and I told him just as much.

We told each other, "I love you." as we walked the dogs after midnight and tried not to freeze too bad. An hour later, I climbed into my truck and cried before heading home to eat tacos and get some rest.

I miss having friends, man, I truly do. I don't know who I am without them, but I do my best to carve it out.

I'd love to find some more one day. In the meantime, I just try to be a good one first.

Driving home, I was grateful for the ones who found me first.