Me, Myself, and Time

An untold story about Hope, Redemption, and Faith 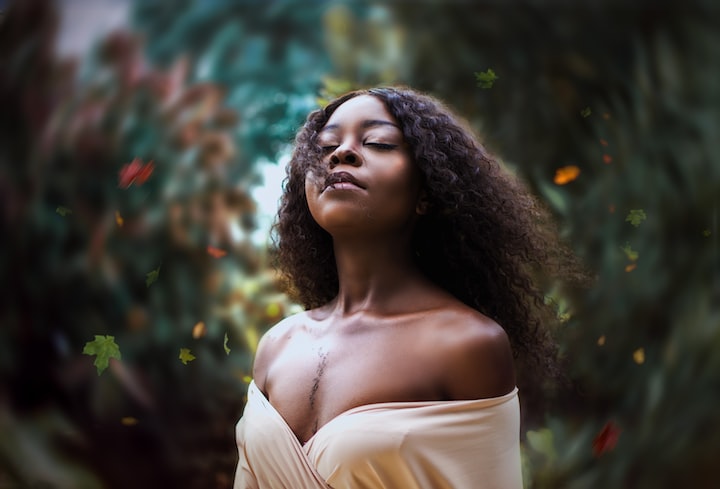 Photo by Diana Simumpande on Unsplash

People may ask a simple question about life are open or not; Well, this is her story because there is something that she needs to get out of her chest, and if she does not say anything, then she will be completely broken on the inside and never have a chance to speak out. She keeps thinking that if she told her childhood, it would help her heal from the broken piece of insecurities and emotional scars;

Lynda was born in a New Jersey county in Tinton Falls, where her grandparents and uncle lived. While we will live here in Florida- her mama, Evita; older half-sister that she shares a mother with, but different fathers. Lynda moved when she was just three and a half years old. We lived in Pennsylvania, near Hersey park, because we had this old picture of the three of us going there, but because of Evita's hay fever towards climate changes. First, we moved further down south to Jacksonville from one apartment to another because a single mother raised us with no father insight for many years, not even a single phone call or letter.

One month before Lynda's seventh birthday, a horrific tragedy happened that would change the world on September 11, 2001, when Al-Qaeda seized four planes from the airport into the New York City's twin towers, another in Washington D.C. to the Pentagon, and the last in the middle of the Pennsylvania field. The Al-Qaeda members, led by Osama Bin Laden, were killed in 2011 by the United States Navy SEALS. She still had too little understanding of what was going on, but she saw her mom in the living room when she got home from school. She was crying while watching the news on television because many people took the Amtrak train from New Jersey to their work in New York, and their cars were still in the parking lot, did not even move for weeks after that. Sometimes, Lynda wonders about this; What kind of rights does she have to be happy with so much suffering in the world? Well, she guesses some may wonder what rights she has to be unhappy in the world? That is a question nobody seems to have answered for a long time.

Lynda was very active in Elementary school because she had plenty of friends in her classroom, her teacher thought of her as one of the children she brought into the world, and she made straight A's on Lynda's report cards. When she stepped into middle school, she thought everything changed for her, like peer pressure from others. By changing her attitude toward people, Lynda talked to; On causality, the values of insecurities that she would feel whenever something did not seem okay, and behaviors that Lynda saw in the classrooms, outside the hallways, even in the cafeteria when we had lunch. Furthermore, especially after school ended, Lynda had to get on the bus back to the Y's for her mother to come to pick her up every Monday through Friday. Except for school holidays and weekends, or if a hurricane is brewing, that happened one time when she was in the eighth grade, she had to stay at home because a storm came to the area where she was living at the time. Mother had to stay at home, but we had no electricity because the storm knocked out the power for four days; it was utterly horrible to see and hear what was happening outside.

Evita does not realize that it is not about her life anymore; it is best for the child that she had given birth to, whether she like it or not. Having a child makes Evita a parent, but adequately taking care of responsibility for them will teach her to be more respectful for her life.

Moreover, Lynda's mom had to stick out her neck to help her out with this situation, just focusing on her becoming a teenage girl. Lynda had to keep her head inside the books and not socialize with anyone. Even it means not going to Football or Basketball games, not joining any after-school activities and clubs. Lynda could not tell her about this because she thought she would not understand it. Lynda cannot go to college because she would have graduated with an Exceptional Student Education diploma from High school, and she knew that but did not want to believe it was true. If Lynda passes her GED test and is qualified to get a standard diploma, she wants to be okay and labeled as having a disability. Lynda could now go to college and get her Associate's degree in Marketing to become a Graphic Designer in corporate communication or advertising agencies in New York City. She never went out for her GED because it is less valuable than a regular high school diploma, so she did not pursue it any farther than First Coast Technical College. Lynda went to that school, hoping to learn more about computers and Graphic design. Still, it did not go any farther than getting a couple of certificates for Photoshop and InDesign on the computer, hoping that she could get a job at a Printshop near the town.

No way, Lynda does not see her future working at a Printshop in Saint Augustine and, she did not know what she was going to do about her education plans. Because Lynda wanted to go to Flagler College like some of her friends from Anastasia Baptist Church were attending time.

Instead, her mother gave her an idea about Penn Foster to get her Standardized High School diploma. Moreover, Lynda decided to try and see what it is all about; Penn Foster has been the pioneer of distance learning, offering affordable, flexible, career-focused education to students for over 125 years. Our students not only have busy schedules, but they know what they want out of life. Our programs are established by our student success and flexibly adapted to fit her needs. Here are some of the benefits of choosing a Penn Foster education:

Affordable Tuition: Tuition is very reasonable compared to our peer schools, and it won’t break your budget. All of your learning materials are enclosed, so there aren’t any extra hidden instructional fees.

Convenience: Study where and when you choose and still have time for your family and social life. The lessons and learning aids you need to complete your training are sent right to your home. There’s no commute to classes, no need to rearrange your schedule.

Reliability: Penn Foster is the world leader in online education. For over 150 years, we have helped thousands of people to find better jobs, and in turn, they have helped their own families and community. By enrolling at Penn Foster, you will receive a high-quality, professionally focused education that will move you significantly towards your goals.

Support: No matter where you choose to learn, you are never alone. You are just a click away from help, whether you need to contact your instructors, job consultants, enrollment professionals, counselors, and more. We are a toll-free phone call, text message, or email away whenever you have questions or concerns.

The time has never been better than now for people to take the path to a new career, start a new business, or master new skills. If they wish, we can begin immediately, and it is easy and inexpensive.

Hopefully, Lynda will get her Associate's degree in Marketing from Penn Foster soon than later; She will go to Flagler College to get her Bachelor's in Graphical Design and then go to New York City. Nevertheless, she promises not to let anyone in her life shatter her dreams and feel such insecurities about anything right.

I was born and raised by a single mother and, I'm not the type of person that doesn't want a hand out when it comes to money because I want to work hard for it myself and, one day, I want to become successful in my terms and conditions.

More stories from Lynda Young and writers in Confessions and other communities.