Finding Comfort In The Bike That Tore Through My Skin

by James Ssekamatte 2 months ago in Childhood
Report Story 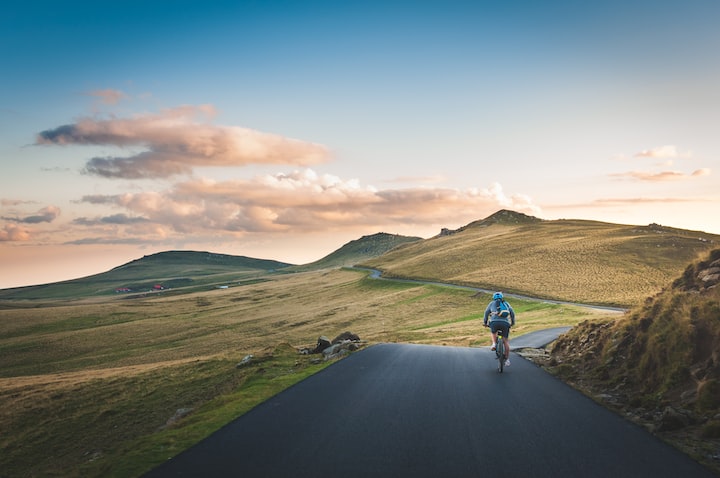 Photo by David Marcu on Unsplash

During my early years (stretched back to as far as I can remember), people used to think I was a quiet kid who was only interested in eating dirt and watching cartoons on Cartoon Network.

Yeah, these things were fun to do but they were distractions. I had spent countless hours seated with my eyes glued to the TV screen, simultaneously suckling on my right index and middle fingers, as I watched some episode of Dexter Laboratories, Johnny Bravo, or my all-time favorite cartoon… The Flinstones.

Sometimes, I would grab a chunk of red brick and seat with it in front of the screen. No, it wasn’t for anything else other than eating.

Combine eating red bricks and watching cartoons, and you pretty much have a good picture of what most of my childhood was like.

But that childhood was a huge reality of compromise. We had toys at home but I didn’t care much for them. Besides, my sister showed her head just a year after I had shown mine. The age difference was negligible but I had to be the adult. Basically, no toys, and watching too many Powerpuff girls’ episodes.

I didn’t care. It never bothered me because I was not as interested in them as people thought anyway. Most of those silent sessions in front of the TV screen were full of nothing but thinking about bikes.

I made my needs clear but my dad had an explanation that suited each stage of my development. I think the reason why I fell in love with bikes was the FOMO from school. You see, I have always been a tall person even when I was young. Being tall and young wasn’t cute at all and not being cute when you were young had consequences in my world.

In nursery school, for instance, tall kids like me weren’t allowed to play with certain things like,… yes… Bikes. These were small 3-wheeled bikes that small kids fit in but our nursery school teachers thought that we (the tall kids) were either too old for them or maybe they feared that we would break them.

I personally think that it was the former because those things were made out of too much iron that couldn’t just bend to a child’s weight.

Everyone always treated us as though we were old kids. At least, that is how it appeared. One of my friends who was also as tall as me didn’t get time on the bikes too but he never seemed to care because his dad had a motorbike which to him was way more thrilling than the 3-wheeled dingies we were not allowed to ride.

Therefore, my love for bikes grew simply out of the desire to have one.

My dad caught on really early. He was always against the idea of seeing me on a bike. His justification was always to aim higher than just owning a bike. Sometimes when we would witness bike accidents as he drove us to school, he would point to those scenes as to why I should not be riding bikes.

When I couldn’t understand my ABCs, this is the opportunity my dad used to get me involved with my school work.

He took me to a showroom that had a blacked-out mountain bike on display. I want to move past this memory fast so I will just say that while there, he promised me that if I got what he considered good grades, he would buy me that very bike.

The agent must have been on in the prank as he quickly took the bike away from the section and wrapped it with a seal tagged to my name.

The visual detail and the promise were just too much for me to ignore at 5 years old. I believed it and this showed in my grades.

When I demanded that my dad meet his side of the promise, he and mom bribed me with a new watch instead because they knew how obsessed I had become with watches at this point. In fact, the watch wasn’t new. It looked new because of all the glittery straps that my mom had kept in good condition.

I didn’t care that this was a girly watch but the trick worked. It took my attention away from the bike, albeit temporarily as I reveled in my new acquisitions.

The next time when my grades started falling again, guess who was back with the old trick. At 6, I wasn’t going to fall for it again. I made demands of my own. I told them that if they didn’t buy me the bike in the summer of 2000, I would fail my exams. They dared me to fail.

I did more than just fail. I rallied other kids with me. My report had something along the lines of “the most stubborn kid in school”. The teachers were not wrong. I had just gotten tired of settling.

My mother never made promises she couldn’t keep. In all her life, she spoke something once in a soft tone and if you violated it, she never repeated herself. She just skipped right to the punishment and trust me, it wasn’t something a 6-year-old wanted.

I remember the time she literally burned my mouth for abusing my sister. In my defense, it was my turn for our dad to carry me and she stole it. Then that tiny brat went ahead to make fun of the tantrums I was throwing. I hurled insults of my own back and mom heard. 10 minutes later, I was being taken to the hospital by my dad.

So yes, she was the best mom in the world, but she was not the mom you wanted to be punished by. So when my school report came in, the punishment wasn’t as severe as the burning incident but it is one that I remember to this day when I am the age she was when she gave me those punishments.

Anyway, after the punishment, I knew that I was supposed to behave like a grown-up. I had no leverage on these people and the only leverage I had came with consequences that I didn’t want to ever experience again.

I, therefore, decided that I would be resourceful.

We were never allowed to leave our home except to go to our uncle's place. He was more liberal and he owned a bakery so we would go there to eat doughnuts and play with his kids.

I used that as an opportunity. I figured that if these kids had a bike, I would be able to ride it whenever I went there. I, therefore, tricked one of my cousins into asking his dad to buy him a bike.

My order didn’t take too long and there we had it. A yellow two-wheeler with little wheels supporting the back wheel.

It was an “adult” bike fit for 6–7-year-olds. I just didn’t like the pretense of being supported by two tiny wheels. My cousin didn’t like it either. So we broke them off for which his dad gave us 5 strokes of the cane each. — Fair trade.

We then went to work trying to figure out how to ride this thing. We fell a lot that sometimes I think it's a miracle we are all still alive with all our body parts intact. But we eventually learned how to ride the two-wheeler. By the time my parents learned of what I was really doing there, it was too late.

They still banned me from going back there but that’s the thing. I didn’t need to go back there.

When my dad had been in university many years ago, he had a huge roadmaster bike which was a hand-me-down from his father (my grandpa).

Years of neglect had it rusting away in some random store that no one ever went to. I went and inspected it. Apart from the rust, the frames seemed alright. It needed work with the tyres but that was just about it.

I pulled my savings and tooth money with my uncle (whom I now know was in his early 20s at the time) with him contributing 80% of it and he took it for repair.

The mechanic fixed almost everything apart from giving it a paint job and fixing the faulty pedals that could fall off when it was being ridden too fast.

But the thing was working just fine to me and I thought that this was alright. My uncle treated it as his but also gave me the right to ride it some time and given my height, I had no problem riding it like an adult.

The fun went on for a year and by this time, I had become really good at it. I would ride it at terrific speeds down the slope that leads to home and something about that felt right. I felt as though all my desires had been fulfilled.

One day, I was trying to break a certain speed record while carrying a certain weight. My parents were not at home as usual and so I had free range to go as wild as I could. These speeds and stunts were also daringly dangerous but my parents not only didn’t know about them, but they also had no idea that I had even ever ridden this bike.

I remember hitting the target I wanted and as I placed my weight on the now terrifically speeding bike’s pedals to stand up with my arms in the air for a celebration, the faulty pedal gave out and my leg slid tangent to the crank, a contact that instantly tore through my skin exposing a white piece of flesh I had never seen before.

I was really skilled at this time that I knew how to handle myself in terms of an emergency. This skill helped me bring the bike to a halt without falling like a sack of shit.

I unmounted from the bike and just stared at the cut as it began to develop small red dots.

No one had witnessed what had happened, and I never made a sound, (quite frankly, I was only thinking about an appropriate story to tell my parents) instead, I just quietly dragged the bike back to the store and hugged it for almost 7 hours.

Minutes after the cut, blood had started filling up the wound and in that store, I thought dust was the best idea. I poured lots of it into the deep cut hoping that it would stop and when my parents came back, they of course found out what had happened although I do not remember what those consequences were before and after getting treatment.

Maybe I chose to forget but one thing I know, during those 7 hours just like the many times I had ridden it, that bike gave me the most comfort I have ever had. A strange thing indeed.

More stories from James Ssekamatte and writers in Confessions and other communities.