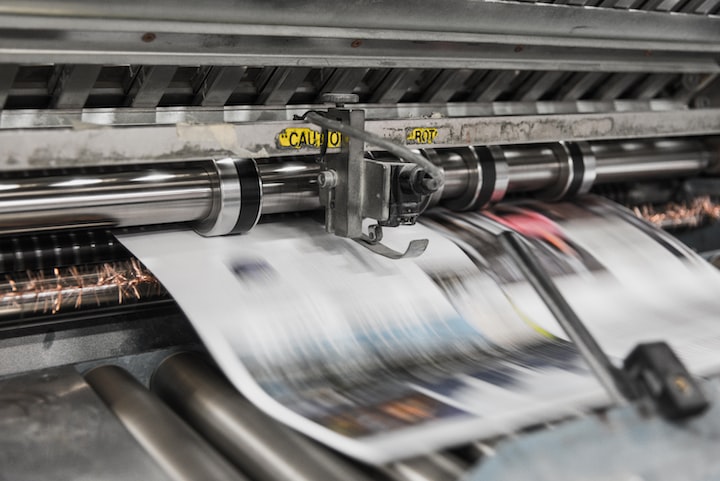 Photo by Bank Phrom on Unsplash

Shortly before leaving Eielson AFB in Alaska and heading for Del Rio, Texas, we went on a tour of the Fairbank's newspaper. When reading about the newspaper's tour, my initial thought and reaction, at the time, was about the tour is a learning experience and how educational it would be for my son and daughter who attended elementary school. At that time, my mind never once considered or had an interest in any position at a newspaper. It was all about the kids, but, that was about to change. My creative instincts were awakened in the advertising department of Fairbank's newspaper. Everything the Director of Advertising said piqued my interest. All of a sudden, my thoughts were focused on working at a newspaper in the advertising department.

Two months after moving to Del Rio, Texas, my opportunity came when there was a temporary opening at the newspaper for a receptionist in the advertising department. The Del Rio News-Herald was on Main Street and only 1.8 miles away and only a 10-minute ride by bicycle. Having no other transportation options, with heals in a plastic bag hanging from my daughter's bicycle handlebars, my interview outfit consisted of a new pair of blue jeans and my best white ruffled shirt. Not exactly dressed for success, but it was Texas in 1980. Primarily, my reading a fashion article in the San Antonio newspaper had a profound influence on my choice and decision to wear the new blue jeans and the white ruffled shirt with heals. As a matter of fact, according to the newspaper article, the outfit was considered very fashionable attire at that time.

Hired! My employment at the newspaper began the following week. Once immersed in the daily routine of the newspaper operations, my reasoning established that miracles happen on Main Street. Yes! It was a small miracle that took place every day that the newspaper was printed.

As the receptionist in the advertising department, the clip art books along with the advertising mail landed on my desk, my knowledge regarding where to find the right clip art helped the advertising department staff. Besides answering the phone, fielding questions, scheduling national advertisements that would come in by mail, calming down irate callers, my duties also consisted of dummying the newspaper. Dummying the newspaper is a guide for placement of the advertising for the following day's newspaper, it wasn't a difficult task; however, you could count on one or two of the ad salespeople returning to the office with an ad at the last minute that needed to be placed in the paper for the following day's edition. That means, you are back to square one, and you had to redo the newspaper dummy.

Long before, my new responsibilities for the classified display advertising, my mode of transportation was an old Dodge Dart which gave me wheels. By some special magic, the old car keeps running. The lack of air conditioning was another story.

Every week, my routine was to stop by each and every real estate office to pick up or discuss their display advertisement for Sunday's editions that normally would run for the whole week except Saturday since the paper wasn't printed on that day. Besides the real estate offices, on another day, my route consisted of going by each and every auto dealership in town and either picking up ads or discussing their display advertising needs for that week.

As time passed, my relationship with the display advertisers grew from my short weekly visits to their offices and on a regular basis speaking with them on the phone. In fact, we became so familiar that my ability to distinguish who was calling was remarkable. In time, all my classified display advertising customers were voice recognizable to me. So thought!

Eventually, my voice recognition would catch up with me. However, before the embarrassing mistake, everything was going rather well. Especially, my promotion of a special classified display business directory. The display advertisement was approximately a half-page of newspaper print. Not only was the directory promotion successful but it achieved an increase in inches for the classified section which was the desired results and was the intended outcome.

Then, what seemed to be a busy but normal morning and fielding calls, the caller said, "Pull our real estate ad for today's paper." My quick reply, "Okay!" Immediately, paste-up was informed to kill A's real estate ad. Easy and done! Surprisingly, the next morning Carol called from A's real estate and said, "Where's our ad? Why wasn't our ad it yesterday's paper?" Suddenly, my heart and stomach were reacting and not in a positive way.

In fact, it didn't take a New York minute to realize that it was Carol at B's real estate who was the original caller. Admittingly, It was my mistake! But! In my defense, the voice sounded like Carol at A's office, and she didn't identify her office; however, my assumption and not confirming which real estate office wasn't a good thing either. As they say, "Two wrongs don't make a right!"

Right on cue, after Carol's call from A's office, and unsurprisingly, my phone rang. Of course, it was Carol from the B's real estate office. Carol questioned, "Why was our ad in yesterday's newspaper?" Why wasn't it pulled." There was nothing to do but to profusely apologize and promise Carol that B's real estate ad would not be appearing in that day's newspaper.

Before you could say supercalifragilisticexpialidocious , my request to paste up was to immediately killing B's real estate ad and to be sure and get A's real estate ad back in that day's newspaper. Reassuringly, they promised and confirmed that my new instructions would be followed. Understandably, before the classified pages, photographic negatives were made, by checking on the classified display pages was prudent and making sure that B's ad was gone and A's was back it. Once confirmed, my breathing returned to normal and my stomach stopped doing backflips.

The next morning, during our advertising sales meeting, the subject turned to the real estate ad mix-up and mistake. Expecting the worst but hoping for the best, thankfully and gratefully, my employment didn't end. What did happen was more attention and focus on the real estate offices, and so began the "House of the Day!"

Seriously, no regrets! My assumption without questioning was an extremely embarrassing work mistake and experience in the 80s at the Del Rio News-Herald in the Advertising Department. In retrospect, it definitely wasn't a failure; however, it was a learning and growing experience. Yes, work mistakes do happen. Ultimately, my voice recognition fiasco is neither a secret nor classified, but a true story.

More stories from Babs Iverson and writers in Confessions and other communities.