by Julie Chernesky about a year ago in makeup

The Art of Emphasis

Makeup has existed to enhance and beautify the appearance of the body. Cosmetics have been around since the beginning of time and have evolved drastically depending on the fashion and beauty trends of the decades and centuries that have gone by. Most makeup nowadays consists of products made out of creams, liquids, powders, pencils, or rouge. After YouTube came to be, many girls and women started creating makeup tutorial videos and became self-proclaiming “beauty gurus.” They started developing nuanced makeup techniques, one of the most popular being contouring and highlighting.

Contouring and highlighting is a makeup technique that has slayed the makeup scene ever since its origin in the 1500s. In its essence, it is the use of lighter and darker shades of product that help emphasize and define facial features. By definition, contouring is using matte powders two to three shades darker than your own skin tone to define facial bone structures such as the jawline, cheekbones, outer nose, and the edges of the forehead. Highlighting serves as a contrast for contouring with a concealer lighter than your own skin tone or shimmery powders that accentuate areas that naturally catch light, such as the chin, inside of the cheekbones, inner nose, and inner forehead.

Contouring and highlighting have become increasingly popular in the past few years thanks to the Kardashians. YouTube beauty gurus make easy-to- learn contour and highlight tutorials, although it is a very tricky method to do well by a non-professional. If done wrong, a person can look too pasty or have a lot of dark marks. The technique has come a long way and has evolved over the years, serving different useful purposes as time has passed.

To really understand the impact of contouring and highlighting, let’s take a look at the history and technique to examine how it used today. 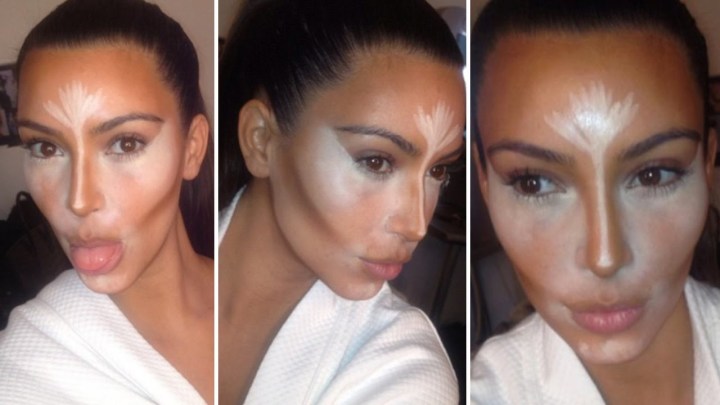 Contouring and highlighting first came about in the mid 1500s. Actors in the Elizabethan Age would contour and highlight themselves so that audience members could see their faces. Instead of the nuanced powders and creams that we use today, people in those times would contour with soot or coal and highlight with chalk or crushed pearls. These methods were often toxic and irritated the skin of the actors.

In the 1800s, Queen Victoria considered makeup to be filthy and should only be reserved for actors, prostitutes, and strippers. Makeup was only available for purchase at costume shops, and most common folk didn’t have a reason to go in. Actors continued to contour and highlight with soot, coal, chalk, and crushed pearls through the 1800s, but when stage lights became electric, the soot and chalk became obvious to audience members. They started using baking ingredients to contour and highlight and started the “pancake makeup” trend that carried throughout the 20th century.

In the early 1900s, the makeup industry really began to make a bigger impact. Actors started to use contour and highlight for all of their looks in films, as makeup artists and filmmakers started to take notice of how well it complimented lighting. Movie stars in the 40s and 50s started to implement the look into their everyday wear and became a norm for celebrities in the 90s. Drag queens adopted it in the 80s to make their faces look more feminine. Actors and performers up until this point were still the only ones using contour and highlight.

In 2012, Kim Kardashian posted a before and after picture of her face contoured. With the technique now being uncovered, it allowed anyone to know how they could try it at home. This shook the makeup industry and started being done by everyday people. Along with the release of the photo and the booming demand of internet beauty gurus, anyone could be considered an expert on makeup. Many makeup gurus released videos of them adopting the technique, which had been an industry-only secret for years. 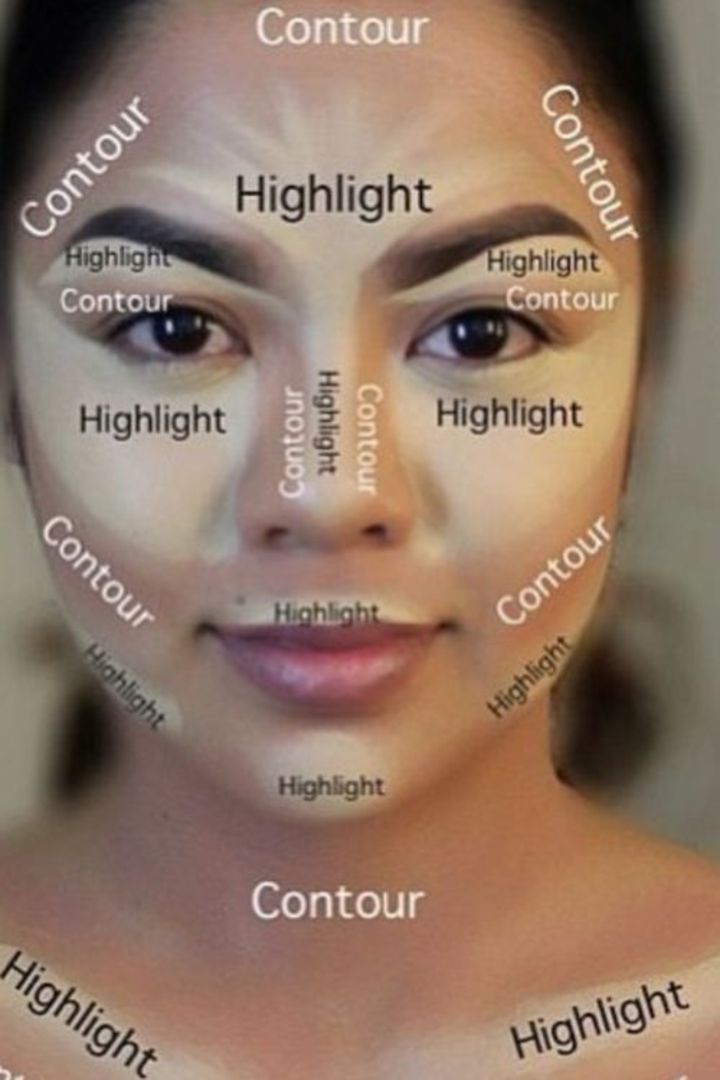 Contour can be a darker foundation or concealer, a bronzer, or come from a contour palette itself, while highlight can be a lighter concealer or highlight product. Use a thick brush that is angled and flat to apply the contour and a thin fan brush to apply the highlight. The following is a step by step guide on how to contour and highlight:

Ever since contouring and highlighting became normalized amongst the general public, there have been a wide number of ways that contouring has been altered. Sometimes these variations are done as parodies.

While contouring and highlighting was meant for the face, it has expanded to other parts of the body for emphasis. Kylie Jenner was caught with a bad “boob contour.” Out of spite, several beauty gurus made videos on how to contour boobs correctly. It didn’t stop there, though, as arm, leg, and foot contouring all entered the picture as well. It has proved difficult to keep these types of contour intact all day, and it takes longer than the face to contour.

Clown contouring was done as an experiment by YouTube beauty guru Bella DeLune and Instagram makeup artist Makeup by Alo on their channel and profile, respectively, in 2015. The point both artists wanted to make was that no one should ever feel that they need to wear that much makeup, if at all, but to show that makeup is a fun way to express yourself and that are so many things that can be done with it. In her video, Bella mentions that in the past she had often been called a clown for the amount of makeup she wears so she took the opportunity to literally take the feedback she got and make a look out of it.

Many people have accused contouring and highlighting as unnatural and misleading. Legendary makeup artist Bobbi Brown has criticized contouring extensively. Bobbi has an overarching makeup principle of individual beauty and that the point of makeup is to enhance features that are already there, not to look like a different person while wearing makeup. She thinks contouring looks dirty when done by non-professionals and believes it promotes the idea that there is something wrong with people’s faces. Bobbi also believes that it makes an illusion out of features that aren’t already there, i.e. cheekbones that don’t naturally protrude suddenly appear on a person’s face when contouring is done.

College Humor made a sketch about contouring, making the joke that the technique looks very unnatural but miraculously looks flawless in photos. The girl in the sketch has a contour and highlight that isn’t blended and makes her look like a skeleton, but when she suddenly takes a photo she looks amazing. This is similar to the commentary many no makeup users have to people who contour, and the response that many contour fanatics have. It comments on how vain certain contour and highlight users can be and that the technique is more suited for photos, but not everyday use.

Love it or hate it, contouring and highlighting has been a makeup method that has literally and figuratively reshaped the cosmetic industry. Actors and performers got ahead of the curve as they had to contour and highlight so the audience could see their faces. Once makeup became more available to people, the technique and the products used have come a long way and have become more accessible to the public. It has now expanded into the makeup routines of everyday people and can be used in many ways other than redefining the face.

I live for a good story

See all posts by Julie Chernesky →