Why I Love Reason 10

by Tim Ellerbe II 6 months ago in feature

And why you should too

I have been involved with music for most of my life. I took up piano at age eight and practiced my butt off until my mother purchased my first budget keyboard. It was a tiny Casio VL-1, but you would have thought she’d bought me a Korg Triton. I hammered out every melody I could until she was satisfied of my seriousness. Then I graduated to the MT-68 LOL. Ah, memories.

All these years later, I find I have had the privilege of using many different synths in my professional career, my favorite of which is the Roland FA-06. For what I do as a songwriter and performer, the FA-06 was a true workhorse. However, once I got away from so much live performance, I found myself quite interested in recording software.

I tried out a few over the years. I had favorites like Protools, Sony Acid, and Audacity. I also had some I despised like Ableton Live. No offense to those who love that one, but it was not my cup of tea. The aforementioned Sony Acid 10 is my all time favorite DAW for its ease of use and simplicity. It has cool features that make my composing easier such as access to my entire sample library at a touch, an onboard Novation Bass Station, and an in program mp3 converter which is a godsend for when I have to work with certain clients.

Lately though, the Acid 10 program has taken a backseat to Reason 10. I was introduced to Propellerhead Reason when version six came out. I took one look at the computer screen and then to my engineer and laughed out loud. What was this onscreen rackmount all about? Racks had played out in the physical world. How in the blazes was a computer-based rack system going to be viable in the then music market? Besides, I was enthralled with Garageband by then, though it also had a learning curve that irritated me at times. I have this thing about technology being user friendly as well as being able to keep up with my machine gun producing style.

I like to have everything right there so I can switch quickly between instruments and effects while the idea is fresh in my mind. Needless to say, I thought Reason 6 was a joke and didn’t even give it a second thought. My mistake.

Jump ahead to Reason 10. Oh. My. God. So I’m at my mentor’s studio and he pulls up version 10 and starts a track. And the track is unreal! I asked what program he was using and he said Reason 10. It bore just a passing resemblance to the version I remembered. There was a lot more going on onscreen. Long story short, I obtained a copy and went to work learning it. I think I drove my mentor batty, calling at all hours of the night with just one more question.

I learned the system pretty quickly though and was soon making more than decent four bar loops. Since I compose a great deal of New Age music, I needed to find a way to expand on that simple practice. Not every song must be a solo opportunity waiting to happen.

Let me tell you that once I turned off the loop function, Reason 10 became the reason (giggle snort) that I sold nearly all of my outboard gear, purchased a full-sized key controller and began to take recording a lot more seriously.

So let me start with what Reason is and what it does. As I stated earlier, it is a computer based Rack mount DAW. What that means is in order to build a song in the program, you need to add instruments and effects to a Rack on the screen. For instance, you may start with a drum machine, then add a bass synthesizer, then a piano module, and then a string module. It is similar to what keyboard workstations do, but instead of being limited to the sounds of that particular workstation, you now have literally thousands of sounds inside of your chosen module. So if you choose a piano module, you get one that covers all basic piano instruments. You also get to edit each sound to your taste even during playback. Did I mention that Reason has thousands of sounds? Not just patches mind you. It also houses a ton of samples. Everything from loops to individual and tuneable, one-off drums are covered. So say you want a piccolo snare with an 808 kick. You can do that whole mix and match thing. I spend hours playing around with different drum kit blends, and unlike older workstations, I am not limited to the drum kits that are included with said workstations. It used to be irritating when I was trying to get the perfect drum mix.

Some of my favorite rack modules in Reason are Klang, Pangea, and Romantic Piano. I could do endless CD projects with just those three modules. They house some of the most beautiful pianos and world music instruments I’ve ever heard. 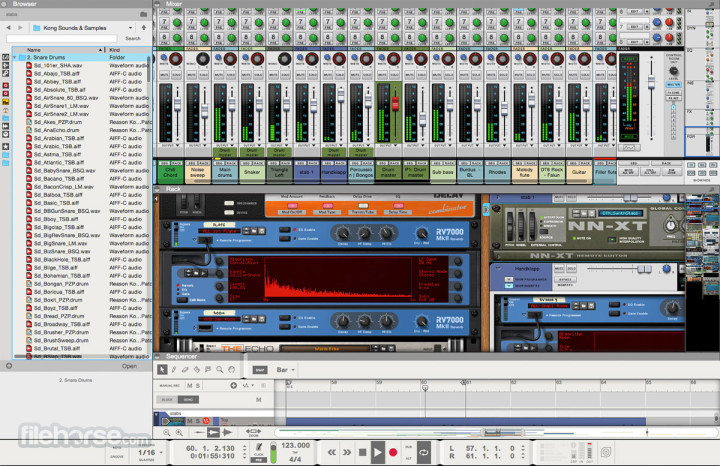 I have yet to get into all of the loop samples and certain other goodies. I will say again that there so many instrument possibilities, one may never get to them all. There is even an onboard sampler that allows you to further manipulate your sounds. There are a few analog synths that are unreal. Propellerhead spared no expense.

Let’s talk effects. I will be honest. I rarely use anything beyond the primary rack unit for effects. One does not need to since it also is full of quite usable effects. Reverbs and delays, etc. The usual suspects. I have at times also utilized the Chorus/flange module. But there are many more that I have yet to get to. Despite that, my music is not hurting, and if you decide not to use anything beyond the primary effects rack, you won’t be disappointed either.

Now what about editing? That is a fun topic. Reason 10 is divided into three primary sections and I will cover all three. They are Sequencer, Mixer, and Primary Rack.

The Sequencer is where most of your work will be done, from recording to editing. From here, you can record a seemingly endless amount of tracks. I have seen people use as many as 60. The most I have used is about 20. You can color coordinate tracks of course, to keep drum kits together, vocals together, etc. Once you are done recording, you can edit every instrument within its own rack module and you can even micro-edit notes and note performances. For instance, say you record a vocal and one note is slightly hot. You can literally go into the specific track, pull up that one note, and adjust it to match the rest of the vocal performance. That will cut down on re-recording just one line or one note. It is a godsend in post-production 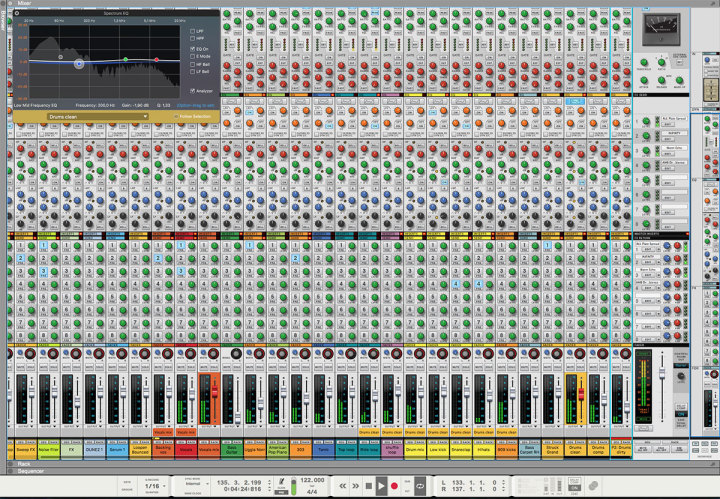 Onto the Mixer. This section covers the levels, naming of parts, and arrangement of these parts in a color-coded section. There are also many, many knobs that control panning, effects, and more. I have not gotten into using everything much, but that is only because I tend to add what I need while recording, so there is no real need later to fool around with things I know nothing about.

Finally, the Rack section, which is a tremendous toy box. There are roughly 20 modules (I didn’t go check, but from memory, there are a lot of modules on the line). You have Piano modules, several drum modules (each with a specialty), world instruments, analog synths, bass synths, a few samplers, and even a loop sample playback module that impressed the heck out of me. It holds several loops and you can switch seamlessly between them while recording in real time without any type of lag. Assigning tracks in the rack system is a simple drag and drop. Just pick your module and slide it over to the rack. It automatically falls into place and simultaneously arms the track you want to record on. Any modules added later just fall to the bottom of the rack unit. And switching between instrument modules is really easy. Just click its assigned recording track and no matter where it is in the rack unit, it slides up to the center screen so you can make changes quickly.

In closing, I would recommend Reason 10 to any musician, beginner or pro. The sheer amount of creative possibilities will benefit anyone. Propellerhead has done an amazing job of making the recording process affordable and accessible. The ease of use, to me is only slightly above Sony Acid. Not difficult at all once you get used to the workflow. And I didn’t even mention that an interface is not even necessary unless you are adding vocals or guitar. Just plug in your controller, put on some headphones, and be impressed.

If you would like to hear some of the work I have done on the program, just watch one of the videos at the bottom of this article. If you do stop by my Youtube page, be sure to subscribe, as I’ll also be putting up a few instructional videos soon. Peace Family!

I am a Musician, Author and Artist. Find out more on my website timellerbe.com