WHAT MAKES IT UNIQUE

GA
by Guitar Amp 26 days ago in instruments 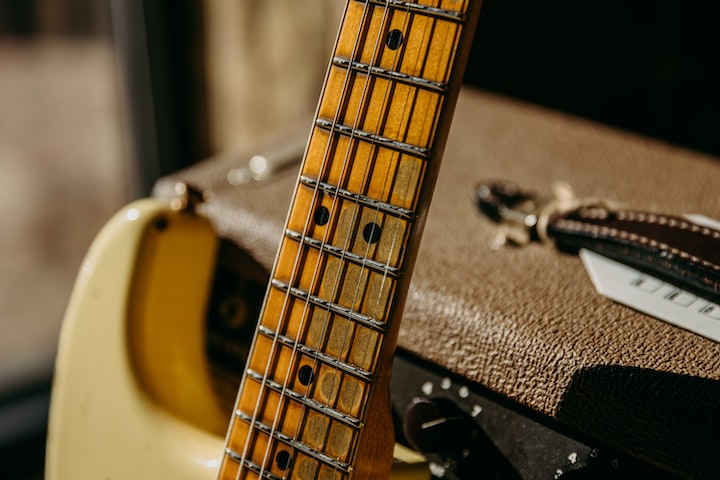 Photo by Eric Parks on Unsplash

The Fender Stratocasters modern, unique body shape (officially known as "Comfort Contour Body") was innovative for its time compared to flat guitars such as Telecaster. It's double cutaways allowed access to higher and lower frets with the same ease. Body shape, which was designed with players comfort in mind, has a distinctive curve on the upper back and a small ergonomic curve where the player's armrests.

Comparing to Telecaster, Stratocaster has a wider headstock with the same non-angled design and 6 in-line tuners to lower the friction between the strings and the nut and easier manufacturing. This was designed to have in mind tremolo to allow strings to stay in tune. To stop the strings coming out of the nut string retainers had to be used.

Stratocaster features a pivot-bridge going through the body which is attached to the guitar with 5 springs easily accessible by removing the cover on the back of the guitar. This way, after using tremolo, a bridge is returning to its original position since strings are pulling in one direction and springs to another making it neutral. Some playes, who dislike the instability of Stratocasters tremolo mechanism (such as Eric Clapton), and failure to stay in tune used to block the tremolo by sticking a piece of the wood and block the gap towards the body of the guitar.

Comparing to other guitars of that time Stratocaster had 3 single-coil pickups with the 3-way output selector which is later replaced by a 5-way switch allowing a combination of 2 pickups simultaneously as well as each of the pickups alone. Different type of Stratocasters today have different combinations of pickup selection for each switch position. The volume level is controlled by one volume knob for all three pickups. This knob is positioned in such a way that it could be easily used while playing without moving the hand from the strings.

The Stratocaster is known for its bright, and extremely clean tone. The bridge pickup has a sharp and bright tone comparing to neck pickup which sounds mellower, louder, and fuller. Conveniently, the middle pickup is somewhere in between these two sounds.

Bridge and middle pickup and combination of those two provide that distinctive "quacky" tone excessively used by David Gilmour, Mark Knopfler, Bob Dylan, Rory Gallagher, and Eric Clapton. The neck and middle pickup are wired to a tone adjustment knob which bridge, with its treble sound is not. Some of the Strat series feature a bit overwound bridge pickup moved from the highest amplitude piece of the vibrating string which increased the signal output. Even more overwound pickups were produced and distributed as "hot" versions or with the bridge pickup only overwound "Texas Hot" which was popular among Southern Rock guitarists.

In the 1970s and 1980s, some musicians modified their Stratocasters replacing bridge pickup with humbucking one and that configuration became to be known as "Fat Strat". Eventually, Fender started to produce such a configuration known as HSS, which was used were for "heavier" sounds in hard rock and metal. There is also HH configuration with two humbuckers called HH by Fender and also known as "Double Fat Strat", HSH and HHH.

The early Stratocasters produced from 1954 to 1965 are generally considered the true fender vintage guitars, and those are at the same time the most desired ones. From 1965 to 1985 Strats, the CBS time guitars are less desired ones mainly due to varying in quality and country where instruments were produced. Since 1985 quality generally increased after the company was sold to private investors, as well as consistency and an improved palette of models being offered.