13 Songs to Rock Your Bones

by Izzie Goblynqueer about a year ago in playlist
Report Story

Give yourself another reason to scream this Halloween. 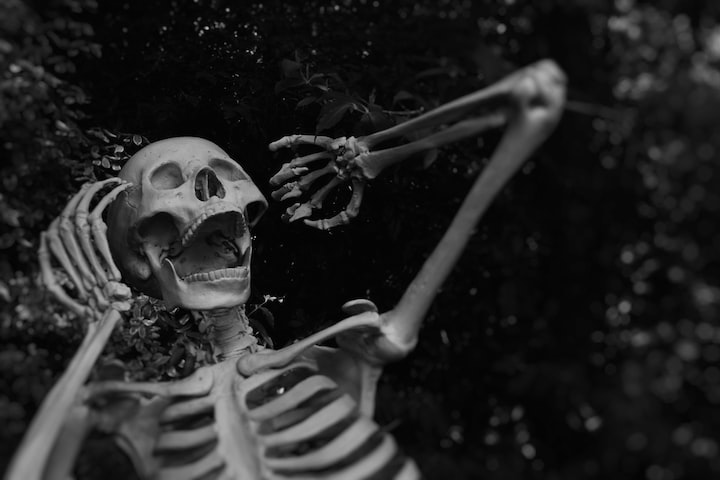 It’s time for sweaters, sweets and spirits - but while you’re planning your Halloween or Samhain party this year, don’t forget to set the mood with some songs that will scream out the spirit of the season. Whether you’re a casual costume partier or a hardcore harborer of souls, these 13 seasonally-appropriate tunes will turn your gathering into a night to remember. Set the mood early, chill your guests’ bones, marry the night, and put the horrors to bed all in one epic party playlist.

1. Enter Sandman (Metallica, 1991) Start off right with the opening track from Metallica’s 1991 album Metallica, and let the darkness creep in with its tale of nightmares for children and adults alike. Originally conceived to revolve around a modern family horror - Sudden Infant Death Syndrome (then known as “crib death,”) - the song was retooled before release to relay the fears of sleep and the nightmares that lie within. Consistently listed among the top/greatest songs of all time, “Enter Sandman” makes for a great start to a skeleton-shaking playlist.

2. This is Halloween (Danny Elfman/The Nightmare Before Christmas, 1993) When Tim Burton’s The Nightmare Before Christmas debuted on October 29, 1993, it became a sleeper hit, surprising execs who initially wanted to release it under the adult label Touchstone Pictures -rather than as a Disney children’s movie - over fears the film would be too scary for children. A cult following boosted the critical acclaim of the movie, and today, very few Americans don’t get the reference when someone shouts, “I AM JACK, THE PUMPKIN KING!” The film’s introduction to Jack’s home via the song “This is Halloween” has become an anthem for the season and can’t be left out of the opening of any seasonal playlist.

3. Thriller (Michael Jackson, 1984) Whether you’re a diehard monster movie fanatic or just someone who loves to dance, you can’t forgo this title in your seasonal celebration. Despite releasing on the album by the same name, “Thriller” was treated with doubt by execs early on, even finding a last minute, unplanned last single release. However, at Jackson’s urging, the song was paired with a now-iconic music video that broke down barriers in pop entertainment and soared sales of both the album Thriller as well as VHS copies of the video itself. Today, the music video is considered one of the most famous music videos of all time, and the song has become a staple of the Halloween holiday.

4. Dragula (Rob Zombie, 1998) This fun, funky best-seller by Rob Zombie has received such varied playtime since its release that even people who’ve never heard of the monster sitcom The Munsters recognize the name “Dragula,” taken from the sitcom drag racer of the same name. Superstition, fear, and jealousy have nothing on this heart-pumping, hard-hitting, adrenaline ride to get a party going.

5. Highway to Hell (AC/DC, 1979) If your partygoers get too caught up slamming in the back of that Dragula, they might just find themselves on a highway to somewhere a lot hotter than they expected. The addictive riff that “stuck out like a dog’s balls” to Angus and Malcolm Young and Bon Scott became an instant classic and is recognized worldwide when the song fires up. Don’t make your party as grueling as the concert tour that inspired the song - include “Highway to Hell” as the refresher before things get dark.

6. Marry the Night (Lady Gaga, 2011) For everything from costume parties to Samhain gatherings, the season doesn’t come without some darkness. The whole reason to celebrate is to remember its importance and place in life…and for many, the allure moves beyond a casual interest to a full-on attraction. On this night of all nights, Lady Gaga reminds partygoers who are Born This Way that it’s okay to “Marry the Night.”

7. Halloween (Helloween, 1987) If well-cut Jack-o-Lanterns don’t make your party pals think of the German power metal band Helloween, this is the time to introduce them. In the core of Keeper of the Seven Keys: Part I, the album that launched power metal to Europe at large, Helloween tied their namesake to their music with the song “Halloween.” As the name suggests, it’s everything that Halloween is at its core, and it should also be the core of your playlist.

9. Feed My Frankenstein (Alice Cooper, 1991) If The Phantom didn’t consume everyone at your party, Alice Cooper would like to see them served up. First featured on Hey Stoopid in 1991, “Feed My Frankenstein” was later released as a single and was featured in the 1992 cult classic Wayne’s World. This star-studded song and its association with Mary Shelly’s Frankenstein has made it a party favorite. Glam that spooky meal while you can, because it’s about to get cold in here.

10. Zombie (The Cranberries, 1994) The heart of Halloween is remembering and honoring the dead, which is what Dolores O’Riordan did when she wrote “Zombie” in the wake of the 1993 Warrington bombings. This powerful protest of the violence that rocked Ireland during the Troubles stands the test of time as a reminder of the horrors of war and the innocents that are lost to the destruction. While not the ‘fun’ side of Halloween, this tribute is an important part of the holiday and a transition to remembrance.

11. Sing for Me (Zak Bagans and Praga Khan, 2012) Paranormal investigator Zak Bagans might be controversial in the paranormal community at large, but one thing that has stayed consistent is his dedication to giving voice to those who have passed on. His 2012 album with Lords of Acid’s Praga Khan, NecroFusion, did just that by pairing post-industrial electronica with EVP (electronic voice phenomena) recordings to create a chilling, moving portrait of trying to reach through the Veil. “Sing for Me” brings haunting clarity to the difficulty of telling these stories.

12. Ghostbusters (Ray Parker, Jr./Ghostbusters, 1984) By this time, you’ll want to reassure your creeped-out partygoers that there is always someone to call when there’s something strange in their neighborhood, so the 1984 single “Ghostbusters” from the movie by the same name is just your trick for the job. Even though it originally debuted at number 68 at release, this song quickly rocketed to number one on the Billboard Hot 100, and not only stayed there for three weeks, it stayed cemented in popular culture as the song of the season for any spooky gathering. This year, the song is once again seeing another revival of popularity with the excitement for the upcoming Ghostbusters: Afterlife, so this is a good time to slide it in to your playlist for some emotional relief.

13. The Sound of Silence (Disturbed, 2015) The original 1965 song by Simon & Garfunkel held strong as an iconic folk rock sensation worldwide for 50 years before Disturbed took on the challenge of covering the song. The song and accompanying music video launched Disturbed onto the Billboard Hard Rock Digital Songs list as number one and spread their name worldwide. Today, this cover is often considered one of the most iconic and powerful covers of the song ever performed, and that makes it a perfect way to close out the midnight hour of Hallow’s Eve, reminding both the living and dead why we sing their songs.

More stories from Izzie Goblynqueer and writers in Beat and other communities.