by Avril Doucette 10 months ago in motorsports
Report Story 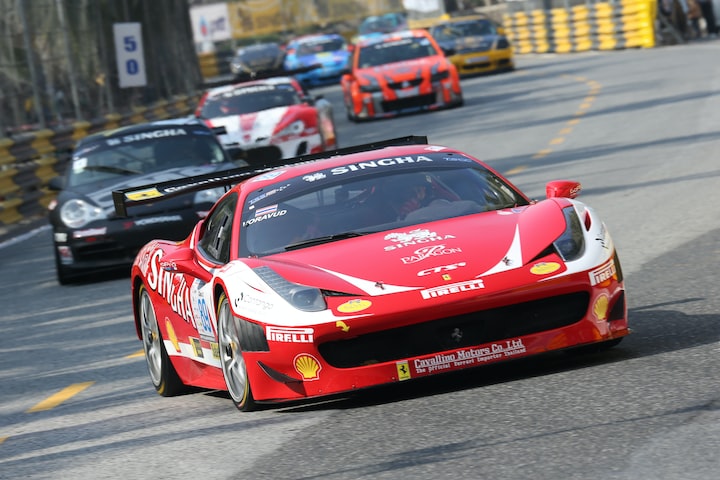 As the sun rose that afternoon she was happy, today was the day she got to spend the whole day at the racetrack with her friends. The day where There was nothing better in the world then the sound of race cars going around on the track. The smell of the smoke coming up from the track as the cars circled around, tires screeching, fans yelling and the feeling of pure adrenaline in the air. It made her feel alive, happy and a source of freedom. There would be all of the familiar faces that she had recognized and her special friends. It would be a day filled with magic, laughs, and enjoyment.

As she drove to the racetrack her spirits were already lifted as she had heard the revving of the engines as she pulled up and could see the smoke. The drivers had begun practicing for the races already, feeling out the track and testing the cars before the race. It was the time of final adjustments and quick alterations before the qualifying races would start. She grabbed her sunglasses that were thrown on her seat and her water bottle. Threw up the door on her SUV and walked towards the gate in her favorite dress.

She felt a smile light up on her face immediately, as she walked around the smoke filled up behind her like magic. She loved the smell of it, the random pieces of tiny plastic and tires being flung at her as she had walked by. She looked around and saw all the happy and enthusiastic fans, the races were always filled with adorning fans and smiling faces. She continued walking the grounds feeling eyes on her, of course because she had worn her favorite dress.

She scanned the crowds looking for familiar faces, she hadn't seen any as of yet but knew sooner or later that she would run into them. She walked up a flight of stairs to go up to sit on a flight of bleachers, to watch the practice runs. She loved to study the practice runs and understand the systems of the corners and what needed to be done throughout the track before the races would start. She enjoyed the scenery, the systems, the smells, the fans, all of it. It was a pure shock of adrenaline in her system.

She continued to sit on the bleachers and that's when she saw two of her close friends in their cars on the tracks. They were of course goofing off with each other, circling each other's cars and enjoying themselves. They were about to prepare for their practice runs. One aspect she had loved is the fact that she had race car champions for friends, also many other interesting people. She was a lucky one for sure ! They sat in the car revving their engines she had watched as the light had changed from Red, Amber to Green. As soon as it hit green neither hesitated; they were quickly off the start line, into the curve creating a smoke line, and heading into the next curve before ending their quick lap.

You can't blink at these Drift Car Racing Events, cause you could miss the whole run. She sat and waited for her next friend to pull up patiently. It's just something she did to study them, to learn and study it more. Not only was she a racing fan, a car enthusiast but a die-hard drift girl. She laughed to herself thinking if only she had studied in school and paid attention as much as she was paying attention in this race. She would've been a lot farther in life possibly. But no regrets !

She saw a figure walking below the stairs in front of her, it was her very good and close friend who worked for the media for the event. He was out taking photos and videos for content to display on his social media and for drivers as always. He was a friendly ally she had at the races to help her feel happy and at ease always. He walked away to begin taking photos from a better and closer area to the track. As she looked up her favorite car entered the race track. The dark blue Viper was her favorite car and never disappointed with the amazing smoke line left by a great driver.

She again watched the Viper wait for the light to begin to turn to green from Red to Amber, once it hit green the Viper quickly reacted. It lunged ahead with great speed, turned through the curve creating an amazing smoke line, and speeding ahead to then take another curve before ending their lap. It was a perfect practice run, she quickly got up out of her seat. Her ritual was done during the pre-race qualifying as she walked down the bleachers. As she looked up she had seen a huge group of people she knew, she smiled and waved as she continued walking to the pits.

The pits was the one place she had loved to be. Her favorite people in the world would always be warm and welcoming to her as she would walk up, they would always escort her in and offer her food and drinks. Sometimes she would take one but usually she would kindly decline. She would love to be close to the Viper and stare at it. It had been her dream car when she was younger. So she got to live out the dream by being in the pit next to it, but also to see it all modified up as a race car was the ultimate dream.

She took videos and photos of the inside, she just loved to have memories of these moments. Because she really cherished the people that she had in her life. It was special to her and uplifting, a great time for her and her happiness. She was grateful to be in the pit area but she had decided to go back out to walk through the crowds, checking out the other cars and vendors that were there. She liked to explore the grounds, make new friends, see the other cars, drivers and enthusiasts. She loved the whole ambience and experience of race day.

She walked around and saw a few more faces that she had recognized that had come up to say hello to her. They all smiled and waved at her as always, they were usually busy filming, interviewing or working but she had always appreciated all of them being so friendly to her. She walked through the car parts seller area to find a seat in the main crowd to see the race. She went up the bleachers to find a place to sit with the perfect view for qualifying. She either liked to stand at the fence if she could get a good view of the race or up in the bleachers if she could have a good view of the whole track.

She found a place at the very top to sit at. She sat next to a few nice guys who talked to her, asked who she was and they all talked about cars and racing. Most of the fans were racers themselves, they loved to race as well, usually semi-pro or just for fun. Which was cool to have that to all be able to bond. She loved bonding with everyone, usually at the races. She heard the engines revving but a lot and realized that they would begin soon.

The cars all pulled up in a row behind one another which was a racing tradition. They would go through one by one, announce each of the cars with the drivers and sponsors. Her heart would always jump when she would see her friends and hope they would all do well. They sang the national anthem as always, and stared at the huge Flag blowing in the wind. After the anthem was her favorite part, for the next eight hours she would watch all of the drivers compete to see who would be the 1st place Winner at Race Day.

The cars would come out in a pair to compete against each other, revving up their engines at the red light. The only thing that mattered is when you seen the Green Light that meant it was time to go......

More stories from Avril Doucette and writers in Wheel and other communities.