The Quiet Excitement of Being at the Airport

by Jamie Jackson 3 months ago in airlines
Report Story

Liminal space at its finest 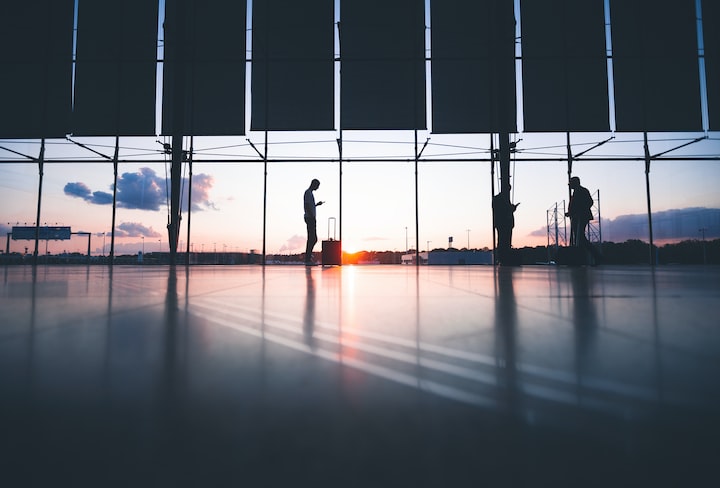 The airport is still an exciting place to be, no matter your age. Well, a big enough airport is, at least. I've waited in airports that amount to not much more than a shed, and they're as dull and depressing as waiting for a bus beside a duel carriageway.

But big airports, real airports, these are thrilling citadels of modernity.

Airports are unique, they're a liminal space, in between worlds, where time is everything (departure times, gate closures) but where time is also none existent as the transient flow of people is ceaseless and consistent, like in a casino. You don't get to see outside, just its cavernous interior, with impossibly high ceilings and lengthy corridors that hint at an end, or perhaps that's just a turn.

Everyone commuting from the airport is in a half-awake state, not settled but not active, with nothing for them to do but wait, sit, slump, catatonic.

Duty-Free promises riches but always fails to deliver. It sparkles with goodies as shops with no front merge with walkways and concourses. But still, on closure inspection, it is style over substance. I've never known anyone to land a bargain at Duty-Free, but still, those two words hold so much cache, so much promise. Though it's just crap you don't want. Luggage shops make the least sense. People, arriving already with luggage in hand, do not come to an airport to buy luggage. But someone must, else why would these shops persist?

Also, in British airports at least, WH Smith's are everywhere. Two, three or four per airport, selling water bottles, neck pillows, airport novels and confectionery. The high street has long since outgrown this antiquated business model and Smith's would have been swept away if it wasn't for some shrewd sucker at their HQ winning the airport franchise.

Plug points seem to be in permanently short supply. Travellers huddle around these juice points, surfacing the web on devices attached to the wall by a cable that's always just that bit too short, their neck angled to compensate, their body twisted over the arm of a chair, their boredom and addiction keeping them on their device.

Pre-security, airports are packed with staff. Front desks are manned, information desks are bustling with people, policemen patrol with guns, and security checkpoints house men and women in white shirts eager to check tickets and passports. But after security, there is very little staff to be seen. There are lots of employees running shops, coffee stands, restaurants and pop-up stalls, but the airport itself seems oddly unrepresented.

Now and again a cleaner will appear, with a small box on a stick, to sweep up discarded wrappers and screwed-up receipts, before disappearing through an unmarked door of an internal wall as if they were never there at all.

The main belly of the airport gives way to long walkways, travellators and corridors leading on to various gates with mind-boggling numbers like Gate 87. No one knows if there are 87 gates. Sometimes one has to even get a train, a monorail, that slides through the concrete tunnels beneath the airport building to take you to a gate who knows how far away from where you started.

These offshoot corridors and travellators are liminal spaces inside liminal spaces and they possess a different vibe to the main building, one of impatience, urgency and expedience. People who until recently were slumped in a fixed position for hours are now pounding the carpets and pushing their cases and waddling in half-runs to numbered destinations down long landings dotted with vending machines and newspaper stands.

Free newspapers. That is another perk of the airport. Free papers and police with machine guns. Only ever spotted in these odd chambers of travel.

There is also no nationality in an airport. There are hints of it, English being the first announcement over a tannoy in Britain for example, but other languages follow, or if they don't, signs are multi-lingual and leaning over to the next table in a café and asking someone if they could pass the salt ends up being a protracted affair hampered by a language barrier you didn't expect to encounter. You could have sworn that man was English.

This is all the routine of someone departing from an airport. This is our main experience. Though we glimpse the reverse when we land somewhere new. The destination airport smells different to home, and is lined with tourist billboards advertising hotels, sights to see and national pride.

Through passport control, travellers, weary from their journey, spill out into the tiled floors of somewhere new, somewhere dotted with luggage conveyor belts, toilet signs and hired drivers holding up A4 sheets with anglo-names on them. 'Shelia Henge' or 'Peter Wentworth' have their cars waiting for them.

Airport travel has become so commonplace, and its security so irksome, it feels as if its magic is waning, but I still feel it, I still get excited. I still get a little scared. Airports were amazing but terrifying when I was young, and they are still a bit of both today.

More stories from Jamie Jackson and writers in Wander and other communities.