The Ferry That Ruined My Dreams of Being a Pirate Queen 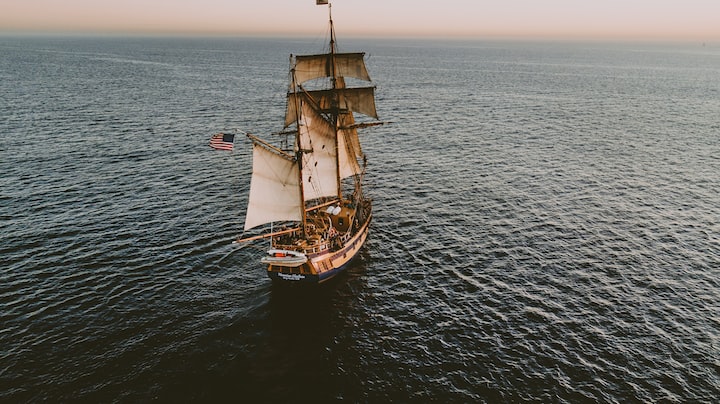 Once upon a time, the Disney film Moana inspired me to move to Hawaii. So I did.

A time after that I was inspired by a British guy on Tinder to marry him and try crazy new things. So I did.

Before either of these times, there was once a time I was inspired to be a pirate queen. Sort of like Keira Knightly, but better, pillaging all the filthy man-pirates and sinking their ships. I thought it would be great to have a fully female crew just absolutely demolishing the pirate market. So I tried.

If you read my previous story, you know I spent the first half of 2020 travelling with my Tinder-spouse north through Britain. We were on our way to spend time with his mother on this tiny little island called Orkney. It is way up there. As far north as you can get in Britain, and then some.

After sleeping on the side of the highway, pooping outside, and bathing in a little truck stop shower that only stayed on at 30 second intervals I am WELL READY for a bit of luxury. We had booked a ferry ride from Aberdeen that takes the North Sea around the west side of the country, a six hour trip. Easy enough, we had just spent two days in a car, we are invincible.

To set the scene, the ferry is bougie. If you're not sure what that is, I mean it is fancy. It has the dark wood and the gold trim. An ornate staircase to the upper decks. There is so much old world charm going on in the main corridors and the bar area that one would easily miss the barf bag holders every ten feet or so. I sure as shit missed them.

We get to our cabin near the front of the boat.

Since we happen to be travelling during the peak panic of the pandemic, only residents and immediate family are allowed travel to the islands. Lucky for us, we qualify. This also meant we have the entire cabin to ourselves as the whole boat is only carrying a handful of passengers. We pay extra for the sleep pods which I thought were a nice touch. They recline back into this neat little dome feature that cancel out a surprising amount of sound.

We get settled in with yet ANOTHER 3 for £3 Tesco meal deal, I have the chicken pasta. The Captain comes on the intercom to introduce himself and inform us of the "rougher than usual" weather we will be hitting along the way. I look out the window at the sun shining and calm water for as far as the eye could see, thinking to myself -"liar."

The village idiot's husband is setting up the tablet with the free wifi. He hasn't used this ferry before but it saved us three hours of driving and looked much nicer than his usual boat. He looks calm. I trust him.

As I have expressed before, I'm a lovable idiot.

Before the boat starts to leave the port. I want to explain something that I did not know was relevant. This ferry is NOT a catamaran. This is a regular ass boat.

I've got my phone ready to take photos of any sea life we come across. I'm excited to see the dolphins, some puffins, maybe a goddamn whale. The possibilities are endless and I am prepared for every single one.

The first hour is uneventful. We eat our dinner and watch some tv. We joke about the very Scottish Uber driver we had on the way to the terminal. I thought he had been talking about fuel prices, turns out he was talking about the weather. I recline my seat back to try and nap for a while.

We start to get vertical, folks. The first wave drops us like a sack-o-shit but my insides were still about six feet above me. I refuse to believe it. I will NOT give up my seafaring dreams just yet. The next couple of waves are concerning but not nearly as high. I get a false sense of the worst being over.

The waves start to hit our window. We are sitting too high up for that. These waves are not okay. Wait, my gut is not okay.

My husband has already left Earth. He has picked a single point on the wall and resigns himself to staring at it for the rest of the journey. His gut is not okay either. We have officially reached the devil's tub and the boat is his new play thing. Each wave lifts the front of the boat to what I am assuming is a ninety degree angle then drops us fast enough to send our hearts out through our asses.

I run to the bathroom.

This bathroom is, thank Cthulhu, a single. I can hear the thuds of the water against the boat. Or is that my chest? Another wave. The floor drops away from me and I grab the sink. I cannot puke in this sink. I let myself ragdoll to the floor and crawl over to the bowl. Everyone has seen a koala hugging a tree. Imagine that but a sickly, pale woman and a toilet. I've got my legs wrapped around the base, my arms are around the bowl, and despite my better judgement my face is against the seat. This is the only way. This is the position that is going to save my life.

There goes my pasta...and again...and again... All while my ass is leaving the floor with each drop off the back of a wave. I make it back to my seat once for about five minutes before I have to resume the koala position. I have decided to stay put there for the rest of the ride. This toilet is my home now. I will write to family often. My breakfast, lunch, and dinner over the past 3 days somehow made it back out into the world.

This continues for what feels like the entirety of the trip. We must be close by now. I get up and crawl my way to the bathroom door. I stop to read the sign about the towels. It costs £5 per towel. What a rip off. I'd just air dry.

I walk my hands along the walls and step into the corridor. I turn to my right and the door to the cabin had slammed shut in the chaos. I open the door just to find another closed door, this one is locked. No. No. No. I left my key card behind in my rush but our cabin didn't have two doors so there is no way THIS is our cabin. I start to panic. The devil is still playing badminton with the boat and now I'm lost. I can hear heavy rain and hail. I head in the opposite direction down the corridor and find the bar and a very peaceful looking passenger sleeping in one of the booths. Lucky bastard.

This isn't right either. The cabin has just disappeared with my husband in it. I go back to the bathroom and barf again. I remember the barf bags on the wall every ten feet. They knew. They all knew and they have just allowed this to happen. I don't know who "they" are but I WILL be having words with them.

I convince myself I have died and gone to purgatory. I am being punished. I begin to believe in purgatory and I am angry. The boat is going to keep changing layouts until I come to terms with my death and repent. Fuck.

A big wave hits and I fall into the wall. Panic really sets in and I just start banging on the locked door.

By some miracle, my First Mate opens the door and I came very close to tears. We lay in our pods and I make use of a complimentary barf bag. For some reason he kept making noises at me that required responses. I say "please stop talking to me". I find out it has only been three hours and we have three to go. I think about purgatory again and make sure to put my key card into my pocket. I start to complain but then remember I told him to shut up so I curl into a ball in my seat and manage to black out.

We wake up in Orkney and his mother is there waiting with a smile and chipper attitude. I am ready to set the world on fire.

I'm still not a pirate.

I'll always use my outside voice.

More stories from Linda Dyke and writers in Wander and other communities.