Pikes Peak: America's Mountain Should Be On Your Bucket List

by Bill Coleman about a year ago in nature
Report Story

Only 70 miles from Denver and 6 miles from Colorado Springs, Pikes Peak can be a day trip for most visitors to Colorado. 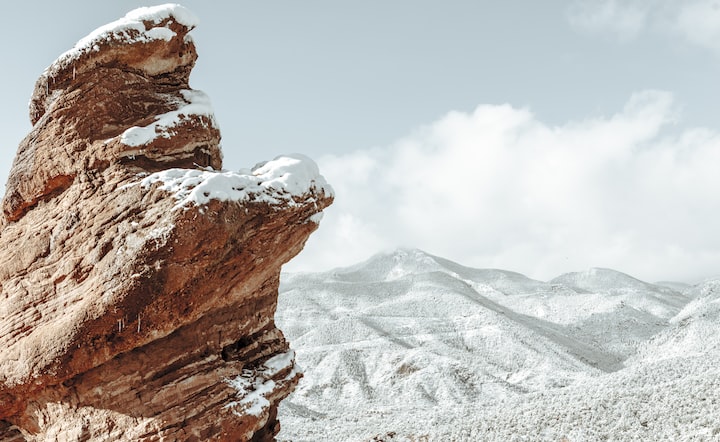 Photo by Joe Dudeck on Unsplash

Of all the world’s mountains, only Mt. Fugi in Japan attracts more tourists than Colorado’s Pikes Peak. Over a half million people a year make it all the way to the summit.

Pikes Peak is certainly one of the most well-known natural attractions in the United States, so you should put it on your “must see” list when you visit Colorado. Since it is only 70 miles from Denver and 6 miles from Colorado Springs, it can be a day trip for most visitors to the state.

Pikes Peak Highway runs 19 miles to the summit. It is paved most of the way; the last part is gravel. It is open all year, but closes during poor road conditions.

The mountain, at an altitude of 14,110 feet above sea level, ranks 31st highest of the 54 Colorado mountain peaks. The mountain is more famous than the rest because it is relatively easy to get to the top, and it is the easternmost big peak in the Rocky Mountains. The mountain at 7,400 feet ranks first for base-to-summit elevation gain.

We have visited Pike’s Peak three times. The first time that we visited, poor road conditions stopped us at 14 miles into the drive up the mountain. The second time we visited, my parents were with us; we could drive all the way to the top, but my mother only saw half of the drive because she had her eyes shut half of the time. For those afraid of heights, it is a scary ride because of the twisting road that will have you looking straight out to the sky in many places.

The best time to visit Pikes Peak is when you can. If you cannot get all of the way to the summit, you are still going to enjoy the ride. Since there is probably going to be a lot of snow on the mountains during those times the road closes, the scenery is going to be spectacular even at lower elevations.

You can climb to the top of the mountain if you are in great physical condition. Approximately 15,000 try that every year. Most of the climbers use the 1- mile Barr Trail which begins at Manitou Springs.

If you are driving, plan on taking two to three hours to go up and back down the mountain. Most people will not want to stay long at the summit because the air is thin and difficult for most people to breath, and it is probably going to be very cold. When we made it to the summit in the middle of October, it was below freezing and very windy. If it is cold in Manitou Springs, count on it being 30 degrees colder at the top of the mountain.

The mountain is made of pink granite that ranges in color from light pink to red. The granite sparkles in the sunlight.

Take advantage of the pull-overs. Stop occasionally to walk a little bit and get some photos. The pull-overs are also good for allowing faster traffic to move on.

From the summit, in nice weather, you will be able to see to Kansas and New Mexico.

Everybody wants a picture in front of the “Summit Pikes Peak 14,110 Ft. Pike National Forest” sign, so do not get so light-headed you forget about it.

Try to spend some time in the Summit House Restaurant. It is not fancy, but it gets you indoors out of the cold, and you can relax with some of their “high altitude donuts” and a cup of coffee. There is also a gift shop next to the restaurant where you can purchase souvenirs of your adventure.

Though many people miss it because the weather conditions are often too uncomfortable to spend much time strolling about the summit, there is a plaque at the summit honoring the patriotic song, “America the Beautiful.” The mountain was the inspiration for the song, and in fact the song was originally written as a poem, titled “Pikes Peak.”

Stop at Crystal Reservoir either on the way up or on the way down. There is a nice gift shop there (not always open.) There is also a good hiking trail. We have hiked part of it in January when the lake was frozen and nobody else was on the trail. In warmer weather, there is often a lot of activity around the lake-– picnicking, fishing, boating, and hiking.

Another good place to stop on the road is the Ute Pass Overlook. The Ute Indians used the pass as a gateway from their mountain homes to the mineral springs at Manitou Springs and hunting grounds east of the Front Range. Spanish and American explorers followed the same route.

You will be happy to have marked Pike’s Peak off your bucket list, and you will probably want to visit again in another season.

Hello! I am a traveler, outdoorsman, and writer.

More stories from Bill Coleman and writers in Wander and other communities.