Hunt for the Treasure Hunters

by Ian Vince 4 months ago in activities
Report Story

Who are the people who dig up coin hoards and ancient gold, silver and bronze? 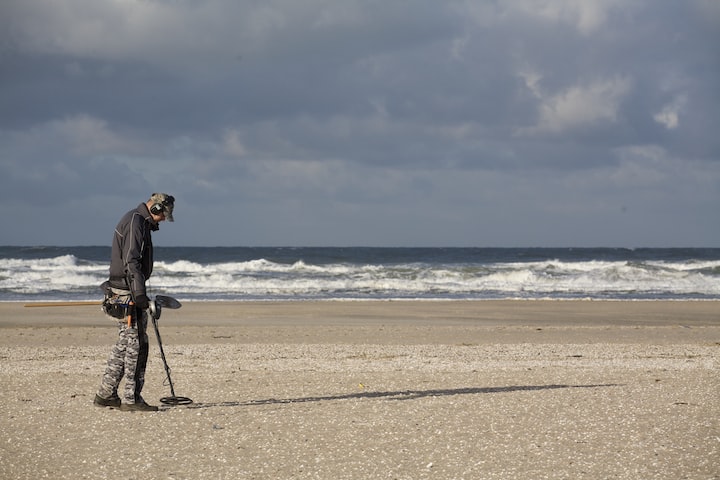 Photo by Fer Troulik on Unsplash

You’ve probably noticed them from the road as you passed by in the car, purposefully pacing up and down a field, sweeping detectors from side to side, looking for all the world like some kind of dress-down Friday forensics unit.

An interesting assortment of characters, from the part-paramilitary look to the beard and jumper, it is a countryside pursuit that has wide appeal, not least because of occasional media coverage of major finds, enormous hoards of coins and countless other treasures.

But there’s a lot more to it than that.

Paul Coleman found himself at the focus of one such story this year after he found over 5,000 coins, in a buried lead bucket, in a Buckinghamshire field. The realisation that it was such a major find dawned on him in stages from the initial beep of the detector.

“You hear the sound and although you can gauge the size – it was a loud signal and I could tell it was quite large – you don’t really know exactly how big it is until you dig. As I dug further down it seemed to be getting larger and larger. A horse shoe buried two inches in the earth sounds big but deeper down much less so. By the time I had dug down two feet, I could tell it was huge.”

It’s a distinct contrast to most metal detecting experiences, according to Peter Welch, the owner of the thousand-strong Weekend Wanderers Detecting Club who were on the scene with Paul when he made his find.

“Lots of people get disappointed quite quickly when it turns out that it’s not instant riches, that they have to put in the time, walking up and down fields.”

Perseverance, agrees Paul, is the key.

“It’s never boring really because, like fishing, it’s the dead times which make the lucky catch worthwhile. Like a lot of sports – cricket, angling, you name it, very little happens for a long time and then you get the big catch. It’s the time between finds that increases the anticipation.”

For Steve Critchley from the UK’s National Council for Metal Detecting – speaking here in an unofficial capacity – it’s not just angling: “People I know who have taken up detecting have not only been anglers but also shooters, military personnel and walkers, so perhaps it is a hobby for people who appreciate the value of the outdoors.”

Like Steve and Paul, Peter recognises the parallels with angling and other country sports and hobbies. “Some of us are there really to relax and swinging a metal detector gives them a purpose, a reason, for a walk in the country.”

“Detecting is not for everyone,” agrees Critchley, “and many starters, lured by media stories of treasure finds, come to realise finds are often a succession of miscellaneous pieces of modern metallic junk. Those kind of finds are boring for many and may help them to realise that detecting is not for them and they have started off with the wrong motivations.”

“It is all about perseverance and developing the experience to recognise finds and what they mean.”

Steve thinks that even experienced detectorists get frustrated if nothing is found even after a careful search. Surely someone walked where the detectorist now walks and lost at least a button. “It can get like that some days.”

“What first excited me about metal detecting”, says Peter Welch, “was my first proper find. Finding your first coin with a date on it - it might be only be from the 1920s – is what gets you hooked, and then you just want to push the date back further and further, you just want to go back in time.”

“People think I’ve achieved something” says Paul Coleman, “but it’s just a stroke of luck, really. If you put enough time in, you’ll get lucky – you’ll find something interesting”

I ask Paul how much perseverance was required, how long did this find take him? He laughs as he says, “Forty years. I’ve been doing this for that long, but although it’s obviously big news, there’s an even bigger difference between this and what I usually find. Most of that stuff I get to keep and look at it every day so for me, in this case, the story is more interesting than the find.”

An unusual mix of Anglo-Saxon and Viking coins bearing the faces of their respective kings, Ethelred the Unready and Canute, its discovery casts a light on Britain’s history on the eve of the Norman invasion – just the kind of needle-in-a-haystack find that can transform our understanding of the past almost overnight. But even small finds can add to our knowledge if they are recorded and aggregated into a national database such as the voluntary Portable Antiquities Scheme (PAS).

The first step in any detectorist’s process is to select a site, but even that, according to Steve Critchley, is cursed with the difficulty of obtaining permission in the first place.

“Your choice of where to search is often more governed by the need to gain access than any other aspect. With the internet, today’s detectorist has a wealth of sources, from county archaeological records to aerial photographs, but even with the best information, access is not guaranteed and without that you cannot follow up your research.”

Many of the UK’s largest landowners are unwilling to let detectorists onto their land at all while, among smaller farms, there’s sometimes a fear of attracting rogue detectorists or ‘nighthawks’.

Incidents of archeological desecration of ancient monuments have become rare but, perhaps because of that infrequency, media reports can make anyone turning up with a metal detector as welcome as the 7th Earl of Elgin at a marbles tournament.

Once you have gained permission and started reading the landscape, however, the good news is that there is little formal paperwork to spoil your fun. You might want to consider getting civil liability insurance – such as that offered free to their members by the National Council for Metal Detecting – and in some places, additional permits are required to detect on beaches and foreshores.

For Paul Coleman, all those years of experience have left him with a feel for the landscape itself. “After a while you get to recognise the various lumps and bumps in the countryside, but that, again, is a question of putting the time in to learn”.

There is a huge range of metal detectors on the market and, as with any hobby that involves technical equipment, there is often an unfortunate signal to noise ratio – it may be difficult to separate the meaningless jargon from the helpful explanations. The current gold standard detector is the XP Deus which depending on the model, costs between £700 and £1300, but most detectorists would advise spending £2-300 which should give you a serviceable model. The Garrett Ace 250 comes recommended as an excellent entry-level model at even less – around £190. Don’t forget wet weather gear and a small spade for digging up your treasure!

You should join a metal detecting club or society and meet fellow treasure and history hunters. They are a mine of useful information, local knowledge and technical advice. Also make a beeline for the National Council for Metal Detecting www.ncmd.co.uk whose £8 annual subscription includes substantial Civil Liability Insurance. NCMD is organised by region with each region organised into local clubs. Joining Weekend Wanderers www.weekendwanderersdetecting.com/ - who arrange detecting days out, so you don’t have to get permission, costs £20 for the first year, £15 thereafter.

Staffordshire Hoard . Discovered by detectorist Terry Herbert in July 2009, when he was searching an area of recently ploughed farmland near Hammerwich in Staffordshire, the hoard is the largest collection of Anglo-Saxon gold and silver metalwork yet found. The hoard consists of over 3,500 items, most of which are decorations removed from swords and other weapony. The collection was valued at £3.28 million.

Silverdale Hoard, nr Harrogate . David Whelan and his son Andrew were exploring a field near Harrogate when they discovered a finely engraved silver bowl. The discovery of the Viking bowl inspired a full dig that ultimately found 617 silver coins and 65 other pieces of silver items.

Seaton Down Hoard, East Devon. In 2014, a semi-retired builder from East Devon chanced upon 2 ancient coins the size of his thumbnail buried just unde the surface of a field near Seaton. After further digging those two grew into a staggering 22000 Roman coins, the 5th largest such hoard ever recovered in Britain. One of the coins became the millionth recorded find of the Portable Antiquities Scheme. The director of the British Museum commented at the time “you sit waiting for the millionth object to come along and 22,000 come along at once”.

Gaulcross, nr Fordyce, Aberdeenshire. In 2013, Alistair McPherson discovered a hoard of Roman and Pictish silver in a farm field. Coins, brooches and bracelets were among more than one hundred pieces of silver - the most northerly find of its sort in Europe. Alistair McPherson’s friends simply call him “the Magnet”.

Ringlemere Cup . Cliff Bradshaw discovered a beautiful Bronze Age golden chalice in a muddy field at Ringlemere, near Sandwich in Kent. The badly-crushed cup would have originally stood 14cm high with a rounded base and was decorated in a cordware style. It is one of only two ever found in Britain and seven in the whole of Europe.

Erstwhile non-fiction author, ghost & freelance writer for others, finally submitting work that floats my own boat, does my own thing. I'll deal with it if you can.

More stories from Ian Vince and writers in Wander and other communities.