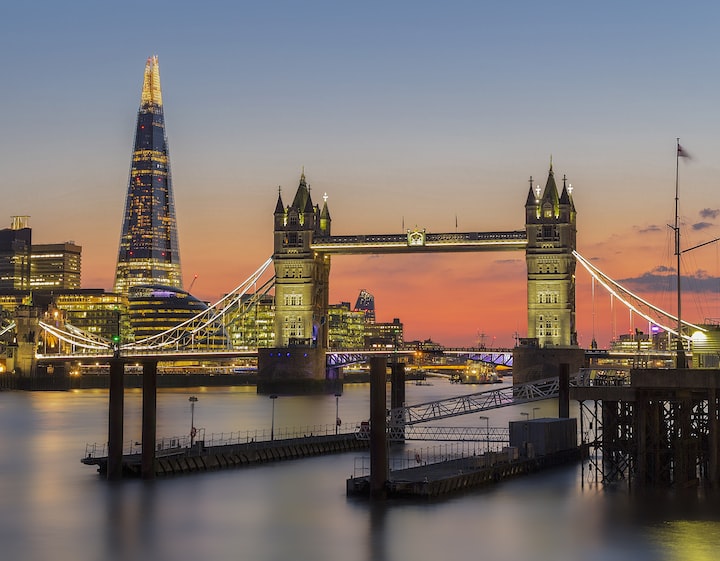 Photo by David Monaghan on Unsplash

London is one of the world's most iconic and historic cities, with a rich cultural heritage and a wealth of attractions to explore. From Buckingham Palace's grandeur to Camden's bustling streets, there’s something for everyone in this great city.

Here are the top ten must-see places in London that you won’t want to miss.

1. Buckingham Palace: The official residence of the British monarchy since 1837, Buckingham Palace is a must-see for any visitor to London. The palace’s famous Changing of the Guard ceremony takes place at the palace gates daily and is a spectacular sight.

3. The London Eye: The London Eye is a giant Ferris wheel on the South Bank of the River Thames, offering stunning views of the city. Visitors can take a ride in one of the glass capsules for a bird’s-eye view of London’s famous landmarks.

4. The British Museum: The British Museum is one of the oldest and most famous museums in the world, and is home to a vast collection of art and artefacts from around the globe. Visitors can explore the museum’s many galleries and exhibitions, including the Rosetta Stone and the Egyptian mummies.

5. Tower of London: The Tower of London is a historic castle on the north bank of the River Thames. This imposing building has served as a royal palace, a prison, and a treasury, and is now a popular tourist attraction. Visitors can take a tour of the tower and see the Crown Jewels, the White Tower and the famous ravens.

6. Trafalgar Square: Trafalgar Square is a public square in the heart of London, and is home to several important landmarks, including Nelson’s Column and the National Gallery. The square is a popular spot for visitors and locals alike and is a great place to people-watch.

7. Camden Market: Camden Market is one of London’s most popular markets, known for its alternative and vintage fashion, arts, crafts, and food. It’s a great place to find unique gifts and souvenirs, and to experience London’s vibrant and diverse culture.

9. Hyde Park: Hyde Park is one of London’s largest parks, and is home to a variety of attractions, including the Serpentine Lake, the Diana Memorial Fountain, and the Italian Gardens. The park is a great place for a picnic or a stroll and is also home to several events throughout the year.

10. The West End: The West End is the heart of London’s theatre district, and is home to some of the city’s most famous theatres, including the London Palladium, the Theatre Royal Drury Lane, and the London Coliseum. Visitors can take in a show or simply enjoy the vibrant atmosphere of the West End.

These are just a few of the many must-see attractions in London. Whether you’re interested in history, or culture, or just want to take in the sights and sounds of one of the world’s greatest cities, London has something for everyone.

Student at Northumbria University. Passionate about storytelling and social impact. Always eager to learn and grow.

More stories from Chandan Hebbar and writers in Wander and other communities.