by Sean Bennett 10 days ago in travel tips

It's never going to be a joy, but you can still be comfortable(ish) 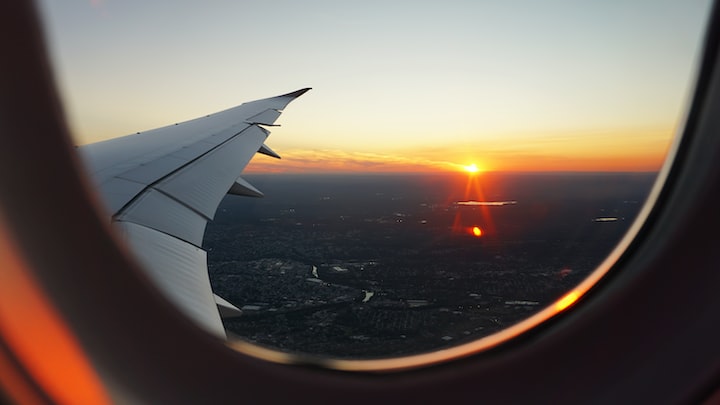 Photo by Eva Darron on Unsplash

I boarded my first plane at around 3 months old. Since then, I can’t even begin to count how many times I have had to hand over my passport to a grumpy looking immigration officer. I genuinely think I may have caught more planes in my life than buses, partly because I have been lucky enough to see much of the world while travelling, but mostly because my family and friends live in multiple different countries.

Over the years I have picked up a few tips here and there for how to make the ordeal of air travel a little bit more comfortable. Gone are the days of ample legroom and a bar at the end of the cabin, for most of us flying is now a mode of mass transport like any other — cramped, overcrowded, and basic.

I'm not complaining, mind you. Cheap air travel, despite its downsides, has brought the whole world a lot closer to many people. Sure, flying isn’t the luxurious experience it once was, but the price tag reflects that now too. You get what you pay for, and I for one am more than happy to deal with uncomfortable seats and crack-of-dawn flight times if it means I can get from London to Rome for less than £100.

So, let's make the most of this age of air travel by figuring out how to bring a splash of ease and comfort into the equation, shall we?

Back in the day, catching a plane was an occasion that people got all dressed up for. Men would don a nicely cut suit and women would break out the cocktail dresses. Those days, as you might have noticed, are over.

Modern air travel is not suited to that kind of finery. When you’re in a budget seat, bolt upright and with your knees up somwhere around your ears, the last thing you want to be wearing is a ridged formal outfit. Short of putting a tarantula down your trousers, I can think of few things that would be less comfortable.

No, if you're going to be flying in this day and age, you need to be dressed in something that's comfortable. T-shirts, jeans, sweaters, joggers, anything that lets you move and that you're comfortable in. What that outfit looks like is pretty much down to you and your preferences, though I would suggest that tuning up at check-in draped in your favourite Star Wars jim-jams might be pushing it a bit.

Comfort within reason at all times — words to live by.

No, not all of the tips will be clothing-related, but having the right outfit is important. If your clothes are uncomfortable, there's not much else that will help except taking them all off, and that sort of thing tends to be frowned upon when you're in a confined space with 100 strangers.

Aside from wearing comfortable clothes, it’s also not a bad idea to wear a few different layers, preferably ones that can be added or removed easily in small spaces. I’m talking hoodies with a front zip, open shirts, shawls and other things that you’d be able to get in and out of without punching the snoring businessman next to you square in the jaw.

Why do you need to be able to adapt your clothing in this way while hurtling through the air in a glorified pringles can?

Because trying to predict the temperature on an aeroplane is like trying to guess the correct lottery numbers for the next 6 weeks. It's not just unlikely, I think it might genuinely be impossible.

The temperatures of various plane cabins that I have been on range from the icy mountain peaks of the Himalayas to the firey reaches of hell itself. If you want to stay comfortable on a flight, especially a long one, layers are your best friend. Throw them on when it’s cold, take them off when it's warm, and sink back in your chair while pitying all of your fellow passengers who thought that air travel would involve temperatures that are suitable for human habitation.

Your average 747 is not quite as parched as the Kalahari desert, but it’s damn-near close enough. It's not that there arn’t refreshments available on a plane, there most definitely are. The only problem is that most of them require a remortgage to pay for and the rest, whilst free, come in thimble-sized cups and on penny-sized plates.

Water is, as far as I am aware, free on most flights, though full bottles will cost you just like they do on the ground. Overinflated pricing aside, though, there will always remain the issue of actually getting hold of your food and drink once you’ve ordered it.

Bigger planes and longer flight may have less trouble on the delivery front, but short-haul flights are a nightmare. There’s one, maybe two opportunities to buy what you need from the trolly like you're on the Hogwarts express, and the rest of the time you have to call some poor flight attendant to your seat, forcing them to pick through the standing passengers and vault over carts in the aisle. By the time you've placed your order and they come scurrying back through the in-fight assault course, you’ll be on your way to landing.

The thing is, having water to hand during a flight is genuinely important. Any number of things can set people off feeling queasy and light-headed during air travel — extreme temperatures, turbulence, lack of space, low blood pressure, etc. Being able to hydrate quickly and in suitable quantities is vital to stave off some of these unpleasant feelings while in the air.

There's usually plenty of places to grab yourself a bottle or two once you’re through airport security, just remember that bringing your own isn't an option, as it will get taken away. Also, many airports concentrate their shops and cafes to the area right after security, with options thinning out as you go further and further into the network of gates. My advice is to make hunting down some good, cheap H2O your first priority once you’re done being scanned, scowled at, and patted down.

Unlike the other tips, this one actually applies more to longer flights, though the basic principle holds true across the board.

If you're going to be stationary for a prolonged period of time, the last thing you want is to have a stomach full of heavy food. I am not a small man and I very much enjoy my meals, but I discovered on a flight to South Africa a few years back the horrors that await those who gorge themselves before settling in for hours of non-stop sitting. Honestly, it’s up there with the more painful experiences of my life. I genuinely believe it would have hurt less to swallow a block of granite roughly the size of a small watermelon… or a large turnip.

Digestion is aided by movement and your organs, funnily enough, tend to be better at their various jobs when they're not scrunched up into meatloaf by narrow aeroplane seats. Food eaten just before or during a long flight is not, therefore, going to be treated to the best in deluxe digestion packages that your body has to offer. Your opportunities to move around are limited and your choice of seat is likely not going to be all that expansive either.

Basically, overeating on a long flight can get really uncomfortable, really quickly, in a way that baggy clothes and bottles of water just can’t fix. And let’s not even mention aeroplane bathrooms…

Eat a decent meal a while before your flight and do your best to pace yourself when you're on board and in the air. As tempting as it can be to make the most of novel in-flight catering, you’ll be surprised to hear that a chicken curry at 35,000 feet can have its downsides.

You have been warned.

Planes are noisy, and so are people. Put them together and you’re in for a cacophony that would rival the battle of waterloo. I don't know about you, but I’m not the biggest fan of listening to engines whirring and babies crying for hour after hour, with no escape or hope for a reprieve.

Turning up to board a plane without decent headphones or at least earplugs is, in my humble opinion, an act of the most spectacular foolhardiness. There is only so much noise that the human mind can cope with before the red mist descends and people start throwing complimentary nuts, and it's not really the done thing to tell a toddler to shut up, either.

Block it all out.

Spend some time putting together a playlist that will see you through the flight and, as soon as all the safety announcements are done and you’re in the air, plug yourself in, crank up the volume, and drown out both the engines and that baby in row C.

If you’re going for the analogue option — i.e. earplugs — I would suggest doing a bit of research to find ones that are actually up to the task of blocking out aircraft engines. Joking aside, those things are loud as hell, and in the absence of a volume button that you can set according to the noise, you’re going to need some plugs that are tried and tested.

Oh, and just be aware that having things in your ears can make the pressure differences at takeoff and landing a bit more uncomfortable, so if that's something you already struggle with you’ll want to make sure you take everything out for those parts of the flight.

Air travel on the scale we know it today is one of the great wonders of modern life. Budget airlines and improving infrastructure have opened up the world and its most far-flung reaches to so many more people. The price we pay for that newfound access to the four corners of the globe is that travelling by plane isn't nearly as luxurious as it used to be, at least not for most of us. But, if we want to keep travelling the world, we’ll have to make do and find ways to make the best of what’s available to us.

Personally, I swear by these tips, and I promise you I’ve tested each and every one, personally and to the highest degree. I’ve spent enough of my life in the clouds to know what does and does not work, and these do. Hopefully, they will help to make your next journey by plane just that little bit more comfortable.

I’ll see you up there.

Writer, producer, editor and all-round curious so and so. Writing about politics, being queer, and anything else that springs to mind! (He/Him) Get in touch at - [email protected]

Read next: Here's to the International Kids!