“Stop Apologizing — Do This Instead” is Horrible Advice for Women

by Anu Kumar 3 months ago in feminism

The reason women over-apologize is more complex than you think. 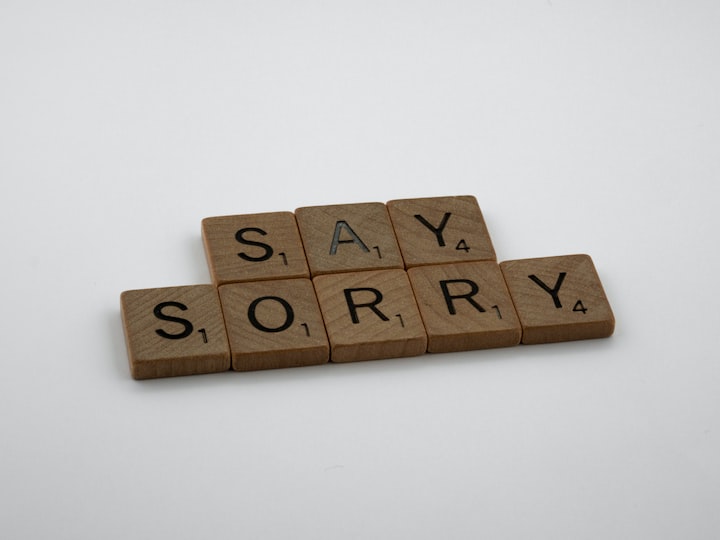 Scrolling through the Instagram explore page, I see a video with the text “Ladies! Stop apologizing and say these things instead!”

Instead of saying “I’m sorry for being late.” say “Thank you for your patience/ waiting on me.”

Instead of saying “Sorry I messed this up.” say “Thanks for the feedback. I will get right on that.”

Why Women Apologize More than Men

I’ve noticed a small micro-trend that tries to solve the issue of over apologizing, specifically aimed at women.

While the person who posted the video meant well, I don’t think they realized how one-dimensional the advice was.

Yes, women tend to apologize more than men, but some of these apologies are very trivial. So why is it that some women always sprinkle “sorry” into sentences like verbal parsley?

Research suggests that women have a lower threshold for offensive behavior than men.

Put simply, women are more likely to think that sharing an opinion or asking someone to move out of the way is cause for an apology; men do not. — Kate Midea

Others believe that women are inherently more empathetic than men or are treated as more fragile, including Ivy Wong, a Chinese University professor of Gender Studies.

Since childhood, Wong says, a lot of parents tend to spoil and overprotect their girls, as they are regarded as more fragile. When the girls grow up, some might actually believe they are weaker than boys. This holds girls back from being bold and reduces their tolerance for stress, she says. — Joanna Ma

This is only a glimpse into the honest answer. Why do women typically have lower offense thresholds than men? Are women more empathetic and raised to be more fragile, or is this a false narrative?

We punish women when they’re not meek and fragile by default.

Women are more likely to be socialized to value empathy more than other traits. We see this in cultures where women are regarded as superheroes for self-sacrifice to their loved ones and “punished” when they don’t fill this role.

We’ve even physically restrained and punished women from talking. Women who were deemed too opinionated or gossipy by their husbands were paraded around with the Scold’s Bridle, a cage-muzzle device worn over the head in the past.

Women, generally more than men, are harassed for declining unwanted advances from suitors.

But “Stop Apologizing — Do This Instead” is Not the Answer

If you think about the various reasons why women apologize more, then you’ll realize it’s complex. At least complex enough that this trend won’t fix the problem. The advice is too reactionary and doesn’t understand the problem’s root.

Why is this advice so popular?

The advice to not apologize for anything can be pseudo-empowering because we get a psychological high from avoiding apologizing for our mistakes. Considering all the challenges women face at work, this technique could feel like you’re making progress on your self-growth journey.

But this trend misses a big mark.

We go through so many psychological lows as women navigating the workplace. So it makes sense that this can be sold as a way to empower women.

When people don’t apologize when they have done something wrong, that doesn’t mean they’re assertive or a leader. Sometimes it means they’re out of touch or having a bad day since everyone isn’t a jerk. This practice hurts everyone and makes it feel like your relationships are filled with half-hearted “assertive” apologies.

This trend is not serving women and definitely won’t serve anyone else. Furthermore, it makes the problematic assumption that to fight the socialization of women apologizing for everything, we must do the exact opposite: never apologize in any situation.

If you don’t apologize and only say thank you, it might give the impression that you’re not regretful that you’re late or that you don’t value other people’s feelings. Of course, you can always tack on the “suggested” phrase afterward, but it’s essential actually to apologize.

If we suggest that women stop apologizing completely because men’s threshold for an offense is more selective than a woman’s, then we’re missing the point.

Instead, we can think about having appropriate offense thresholds for men and women and not give different lists based on a person’s gender. If we keep asking these questions and diving deeper into the answer, we might get closer to meaningful change.

This story was originally published in Corpus Callosum on Medium.

Writing about the brain, culture, and everything in between. Researcher, expat, and book addict. Head editor of par-desi.com.

Receive stories by Anu Kumar in your feed
Anu Kumar
Read next: The State