by Lindsey. 4 months ago in career
Report Story 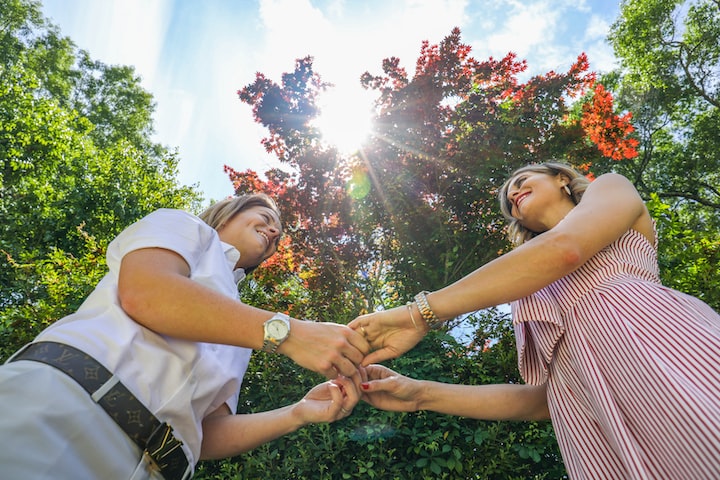 Photo by Joe Ciciarelli on Unsplash

I was always shy. Somehow, for reasons I don't even understand, I decided to become a litigator. It was not a profession kind to the timid. I liked the pre-litigation part, you know, the part that did not require any confrontation. I was able to think deeply about discovery matters, pondered key witness value/their testimony, and contained my thoughts on paper.

It was the end of that part and the beginning of the "go to court and argue" part that I dreaded. I had to engage in human contact with overly paid men in fancy suits who clearly thought they were smarter than me. I liked thinking about my case, but I struggled to confidently exude those thoughts to others. My firm was comprised of more men than women (shocking), except for two other female attorneys. One was newer like me and just as busy, which meant that I never saw her. The other female was a partner. (Name withheld for privacy). I cannot emphasize how far removed that meant I was from her in every possible way- salary, knowledge, respect.

A partner at a law firm can best be compared to a tenured professor. They were untouchable, expensive, and highly coveted. One does not simply become a partner without devoting significant time. She had been practicing law for almost forty years or longer than I had been alive.

Here's the hard part about being a young female attorney - we rarely have mentors.

We don't want to get too close to any of the male partners and honestly, they do not understand the female plight anyways. Female partners are still relatively rare, especially in the large firms. This female partner was as rare as finding a real Picasso painting because her age meant that she had begun practicing law at a time when females just simply were not. She reminded me of former Justice Ginsburg, as both had clearly successfully paved their own way in a male dominated profession. I cannot fathom the number of sleepless nights and their relentless attempts to earn respect.

I am embarrassed to admit that it took me a whole year to conjure up the courage to talk to her. Our lives were spent behind close office doors and socializing with partners was just not something lowly associates did.

My heart raced as I approached her one day and tried to formulate a viable opening.

But I finally had a good moment to make her acquaintance in a socially acceptable way: comment on her gorgeous skirt suit and matching purse. She was always dressed well, as any partner should.

I walked past her and quickly said that I loved her outfit. She smiled and commented that it was her favorite work outfit. Great! A way in, I thought. She was always dressed well, even during the pandemic when it was easier to work from home in our jammies all day. She pivoted after we crossed paths and asked me whether I was one of the associates working on the new environmental law case with the EPA that the office landed. I choked back a surprised response and responded that I was.

The beginning of our bond began with that conversation.

She evidently had a lot of experience in environmental cases, which was surprising because it was a niche area of the law. She offered me her time to assist on the case and bounce off ideas. I didn't realize that someone so important would have an interest in me.

I cannot emphasize enough how appreciative I was at the time. I knew that her time was valuable because she carried a higher billable hour requirement than I did, and she had to maintain her staunch reputation in a sea of male privilege. The male partners brushed away my questions or made me feel silly for asking. Google became my best friend. My fellow associates knew as much as I did, which was code for unhelpful. I stumbled my way through hearings echoing what I hoped was accurate information.

We decided to meet once a week for an hour each Wednesday afternoon at a nearby coffee shop.

I was hesitant to ask her any personal questions initially because I understood that our meetings were strictly business related. She seemed eager to offer me help on my case, provided advice on tackling my opponent's arguments, and she often explained how difficult it was for her to maintain respect from her male counterparts. She came to admit that she had often felt a need to help younger female attorneys navigate the ranks because she was never afforded that luxury. She seemed like a hardened soldier in serious need of a vacation. I could tell that she was ashamed of her grey hairs, but I thought they conveyed wisdom and trust.

With time, I came to discuss my personal struggles with her. I had practiced law for three years but had no one mentoring me or showing any sort of interest in my professional growth. My supervisor was male and showed an interest in whether I met my billable hour requirements only. There was never any discussion as to whether I was even an effective attorney. Heck, I had no idea if he thought I was remotely competent or cut out for litigation. I was shamed from asking questions. I didn't have anyone to confide in throughout those three years until I met her, and I am ashamed to admit that I made a lot of embarrassing mistakes leading up to that. Those mistakes probably fueled some negative stereotypes about women being less smart than men, but really, women are critically lacking female mentorship.

Females need a safe person to ask those "dumb" questions. Sometimes unanswered questions lead to errors that our male counterparts were not ashamed from asking and therefore, avoided committing.

Now, more than ever, is a time for female empowerment. It helps when it comes from an older and wiser female mentor who can gently warn, encourage, and empower the younger female mentee.

Rather than mutually vent with me, she instead listened.

I was able to get things off my chest and over time ask the "stupid" questions I had needed to ask someone for three years but simply couldn't. Those Wednesdays felt confidential. They were necessary for me to continue excelling in my craft. I like to think my female mentor grew too. She was able to breath some fresh air on the way to the coffee shop and experience a mini sense of freedom away from her constant obligations. She was the one taking the biggest risk meeting me because she had no more to lose and less time to give.

She didn't need to impress me so she could speak freely. Apparently, the practice of law stole her child bearing years so she had no reason to rush back home after a long day. I think that's why she justified such long hours sometimes. I asked law related questions that may have seemed simple to her but sometimes she would see the law in a different way as she simplified her explanation of the law to me. She told me once that she was hopeful our meetings could spark a future for other female attorneys desperately seeking a mentor. I selfishly didn't want her to mentor anyone else, but I knew that I would invest in someone as she did with me. It wasn't about earning good karma either but rather ensuring that females are placed on equal footing with men. I think that's the beauty of mentorship - both individuals grow.

Our first Wednesday coffee meeting occurred now ten years ago. She is retired and trying to reclaim some lost years. While her travel plans have been delayed somewhat due to the pandemic, she relishes in quiet. Oh and remember that former boss uninterested in my career development? Well, we retired years ago.

I am still asking "stupid" questions but with less timidity because of the boldness she instilled in me. I have been able to recruit other female attorneys to our firm.

Well-dressed professional by day; interesting and sophisticated writer (I wish) by night. ✌🏻

My short stories are a combination of fiction, fact, and advice to fellow readers. I try my hand at some of the writing challenges too.

More stories from Lindsey. and writers in Viva and other communities.