Love in a Black Book

DV
by Donna Varnes 3 months ago in fact or fiction 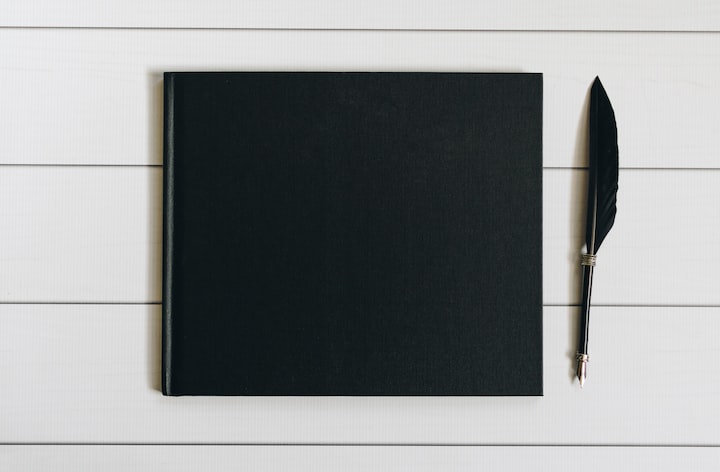 LOVE IN A BLACK BOOK

Lily cranked the heater up in the van, the icy wind confirming her decision to head south. She already got gas and snacks and was anxious to get going. Winter storms were common in March in Billings Montana and usually didn’t faze her, but this year she was determined to vacation in a warmer spot. Her friend Ann was going but now couldn’t. It was pathetic she was going alone.

As Lily was revising her new solo plans she noticed a woman who was underdressed for the weather, hurrying down the street struggling to carry two overstuffed bags. Lily pulled over and rolled the passenger side window down. “You need a ride?”

The woman hesitated. “No, I’ll manage.”

Lily leaned over and opened the door. “It’s no trouble. It’s too cold to be walking. Please just throw your bags in the back and get in”

The lady pushed her long dark hair back and looked intently at Lily, then got in.

“I’m not sure. The homeless shelter is full; maybe just drop me off at the library.”

“What will you do when they close?”

“Oh, I’ll think of something, I always do.” And she flashed Lily a confident smile.

Lily circled the block, then blurted, “I’m headed somewhere warm if you want to tag along?”

Lily laughed. No I was thinking maybe Florida. I haven’t actually made up my mind.”

The woman looked at her incredulously. “Why would you invite me? You don’t even know me!”

“Well you seem nice enough. I have room, and I’d actually like the company.” Lily circled the block a second time. “So are you in? I’ll be coming back in a couple weeks; it may be warmer by then.”

As Lily sped down the freeway she couldn’t believe what she had just done. She wasn’t generally impulsive or a risk taker. But she felt drawn to this stranger now sitting beside her, it seemed right.

Ruth told her that she was originally from Texas and had ended up in Billings when she was hitchhiking and eventually caught a ride with a trucker and made the mistake of falling asleep too long.

Lily told her all about the pet store she owned, and how she hadn’t taken a day off in three years and decided it was time. After several hours of sharing stories like old high school friends, Ruth drifted off to sleep. A few more hours and Lily was also feeling sleepy so she took the next exit and found a motel.

Ruth looked around and said nervously, “Lily, I’m sorry, but I don’t have any money for a room or gas or anything. I really shouldn’t have come.”

“I knew that when I invited you Ruth. Remember I just wanted the company. Relax and enjoy yourself.” And that she did. Ruth was delighted with the room and her bed and stayed in the tub for almost an hour before Lily pounded on the door and reminded her they had to go eat before the restaurant closed. She ate her cheeseburger and fries as if it were the best steak in the world and patted Lily’s hand, repeatedly thanking her.

Somewhat embarrassed, Lily finally said “You are welcome Ruth so there is no need to keep thanking me.”

As they were lying in their beds that night Lily said, “You know Ruth, I don’t have any particular plans. If you have family or somewhere you want to go, as long as it doesn’t involve a winter storm, I am willing to take you there.”

“Well I have a sister in Garland Texas, but she kicked me out when our dad died. She inherited the house, I got the black notebook. I don’t think she wants to see me. And I have an aunt and some cousins in Corsicana but I don’t even know how to get ahold of them, so you just go wherever you have a mind to go, I haven’t been in contact with my family for years.”

As Ruth slept, Lily googled Corsicana Texas, currently 61 degrees. The surprise took two days of driving. As they drove around town, Ruth got teary eyed. “We used to have picnics in that park with my Aunt Emma, and all my cousins, such fun times.”

Lily pulled into the parking lot. “What were their names?” After Lily had compiled a list she said, “Ruth, we should have our own picnic here, I think I’ll go to the store and pick up some stuff. Do you want to save that table for us?”

“Sure. There was a grocery store in the next block if it is still there. We used to walk to it.”

It was there. Lily walked in with her list. She handed it to the clerk. “I’m looking for some lost cousins. Do you know any of these people?”

The young man looked at the list and looked at Lily as if sizing her up. He turned and walked in the back, there was some hushed conversation and a red haired gal stuck her head around the door and peered at her. Finally she came out and said, are you a creditor or something?”

“No! I’m just trying to help my friend Ruth find her cousins.”

“Ruth! Ruth Taylor? I’m Emma Jean, she exclaimed pointing at the sheet. You know where Ruth is at?”

“Yes, she is at the park waiting for a picnic lunch.” Lily said still not quite believing her good luck.”

“Oh my God we have been looking for her for years! She’s at the park you say?”

“Jeff, you cover for me, and call Rachel, tell her to meet me at the park.”

“Say, I’m just going to get some picnic stuff.”

“No, no you’re not. Jeff go to the deli and put us together some chicken and all the trimmings. We’re going to have a picnic!”

Emma was grabbing her purse and keys and calling on her cell phone, “Kyle tell Frank to let you take off work, Ruth is at the park. Meet you there.”

Jeff handed Lily two big sacks of containers and off they went. In the end 11 family and friends turned up for Ruth’s picnic. Lily got so caught up in the joyous event and all the tears and laughter, she felt as if it were her own family she was reunited with.

Emma came over and said, “Don’t take off. Peggy and Mike have extra room out at their farm. Tonight they’re throwing a party as your cousins have families of their own now, that you haven’t met. We’ll call your sis too.”

“No! Not Jackie. She kicked me out remember?” and Ruth hurried to the car.

“Her sister is so sorry she did that. She has been looking for Ruth ever since. They need to reconcile,” Emma said.

“Here’s the directions. Be sure she comes.”

When Lily reached the car, she found Ruth crumpled into a ball in the front seat, clutching the mysterious black book and sobbing. She quietly got in and sat beside her new friend.

Finally, Ruth said, “I know you think I’m unforgiving, but my sister inherited everything, and dad just left me this notebook. Who would do that? I always thought he loved me, but that just proved he didn’t. I don’t even know why I’ve kept the worthless thing. He told me it was important and would help me, but how?”

“Can I see it?” Ruth tossed her the book. Lily flipped through it. It was column after column of letters and numbers. It truly didn’t make sense.

“Emma says your sister is sorry. You should consider at least talking to her, but regardless, Emma and her family seem to truly care about you, so let’s at least go to the farm okay?”

Ruth nodded. As they were driving through the countryside, a group of the letters on the page flashed through her brain; IBM. She slammed on her brakes and pulled over. “Let me see that book.” Lily scanned the columns, COP 30, MSFT 150 IBM 75. “Ruth these are stock tickers! Did your dad have a stock account?”

“I don’t know, maybe. I was 14. I wasn’t really paying attention. I know he liked looking at this book. It made him smile but he didn’t really talk about it. What does it matter?”

Lily looked at the inside cover. Who is Glenn Walters?

“Some guy from his work. He came over a few times.”

“We need to talk to him. This black book could be something after all.”

They spent the next three days at the farm. They were glorious days of coffee on the big porch, breakfast with fresh farm eggs and homemade jelly on toasted baked bread, board games late into the night, and warm conversations with truly outstanding people. But finally Lily said, “Ruth, we need to go see your sister and Glenn Walters, you ready?”

When they got to Garland Texas, Lily dialed the number Emma had given her. Jackie immediately picked up. “You have Ruth?” She asked excitedly. Emma told me you were coming, I’ll be waiting.”

When they arrived at the Ranch style home, Jackie flew out the door, with her arms outstretched. Ruth got out and just stood there till Jackie grabbed ahold of her sobbing, “I’m so sorry Ruth, I missed you so much, I was wicked for kicking you out, I love you Ruthie, I truly do, please forgive me, can you forgive me? “ she looked pleadingly at Ruth.

Ruth’s stoic face finally broke into a smile. “You always were a brat, but I missed you too,” and she gave her a hug.”

After an emotional reunion with a few tense moments, they sat at the table smiling and eating chicken salad and drinking the best sweet tea Lily had ever had.

Jackie stood up. ” I want to show you something.” She led them to Ruth’s old room.

“No” Jackie pointed at a big basket of flowers with a balloon that said, “Welcome home.”

“Please move back in Ruth. I have really missed you.” Teary eyed, Ruth nodded yes.

Eventually Lily brought up the subject of the black book and Glenn Walters.

“Yes, he was here once and left me his card.” Jackie began rummaging through a drawer. “Here. Said he needed to get ahold of you about Dad’s account. Seems he is retiring. Said you’d know what he was talking about since dad gave you the black book.” Jackie looked curiously at Ruth.

“I know nothing about it. That’s why I need to talk to him.”

So they called and then went to meet Glenn. He took the black book and smiled. “So, if you’ve been watching these stocks and bonds your dad invested in, his account, well your account now, is worth very close to a million dollars.”

Ruth looked faint. Glenn quickly got water. “Drink this, I thought you knew.”

“Well you can take it out if you want, but it’s doing very well. We could however, set it up so you have a monthly income and put some in lower risk investments. That’s my advice.”

“I want Lily to have some.”

“No Ruth, that’s your inheritance from your Father.”

“If it weren’t for you Lily, I’d be sitting out in the cold feeling sorry for myself. Now I’m reunited with my family and have enough money to do whatever I want.”

When Lily got back home a week later, Ruth’s registered letter was waiting. It contained a certified check for $20,000.