I Wish People Would Pick Their Last Names With More Thought

by Aditi Balaji 17 days ago in feminism 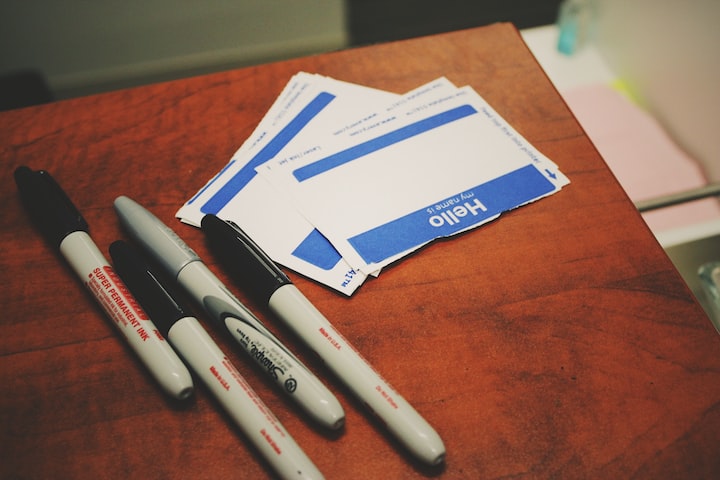 Last names or family names are a component of our identities that we take for granted. It is something bestowed upon us when we are born and reinforced through repetition and subtle pressures during the course of our lives.

But how relevant are last names in this day and age?

The last name system started off in most regions as an indication of a man's occupation or palace of origin. Back in the day, you heard someone's last name and understood where they were from, how they made a living and how they fit into the social hierarchy with respect to yourself.

In India, this eventually morphed into the infamous caste system. It might have helped for administrative purposes in the beginning, but better systems have been implemented since then.

Also, you can no longer understand a person's background using their last name. Two people with the same last name could just as easily be from rural India or from the Silicon Valley. A doctor can undoubtedly come across a construction worker bearing his last name. Every son has the same last name as his father, but is unlikely to follow the same occupation, thus making the last name irrelevant.

Which begs the question—why are women all over the world still changing their last names after marriage?

Women and the surname system

All the rules of the surname system—be it your caste or occupation or hometown—apply to men. For women, it's first her father's name and then her husband's name.

Despite the fact that women all over the world are getting educated and having careers and identities of their own, their last names are still dictated by this archaic tradition and not by their profession.

The last names we're born with aren't relevant anymore. This applies to men and women equally. But when I see women even from the most developed societies changing their names after marriage, it feels like they're suddenly bringing the relevance back. And they're choosing to tie their identities to their husband's family, not their profession, passion project, volunteer work, or any of the numerous identities that they've painstakingly created for themselves. (Maybe I should change my name to Aditi Product Manager or Aditi Blogger in protest.)

It especially surprises me when I see women hyphenating their last names to include both their father and their husband. If I were to go through all that extra trouble, I'd probably first add my mom's name in there. She did most of the heavy lifting in bringing me into existence and keeping me alive till adulthood.

I've heard women say "I didn't change my name because it's so inconvenient these days, you have to reflect the changes in your passport, your bank account, your national ID—"

But why does a person with a passport, a bank account and a national ID, still want to identify herself by her husband's name?

Many women feel that it's nice to feel like a part of the same family, sharing a common name. It solidifies the commitment and gives us that feeling of permanence that we all crave in a marriage.

I get that. I really do. I'd be all for it if both partners decide to pick a new name and change their existing names to start this new life. I just don't like how lopsided it is. I've never even heard of a man changing his last name. What kind of precedent does it set for your marriage if you're the only one who is making the effort to feel like the same family?

Pop culture is full of jokes where men are ridiculed for changing their names after marriage. In fact, when women actually want to keep their original names after marriage, they are judged by conservative folks in many cultures. I have a friend who tried to renew her passport after marriage and the office changed her last name without even asking her first! That is ridiculous.

Naturally, she had it changed back because she wasn't going to run around a million public offices for all her IDs and documents. And during the process, the official at the passport office openly lectured her on the importance of family. To this day, I can't believe this really happened to someone.

How we affect children by propagating this biased system

Children are named after their fathers by default.

It's just always been done this way. There used to be a reason—related to profession or for administrative purposes. But like I mentioned earlier, these reasons aren't relevant anymore. And yet the world continues to follow this patriarchal tradition. Most people don't even think about it.

But maybe we should think about it.

Because the moment we name our kids after the father, we have already burdened the next generation with having to learn, unlearn and fight these biases. By following this convention, we are subliminally teaching our kids that the father is the "more important" parent, setting them up for a lifelong journey of ego battles. And honestly, we should try and end this nonsense with our own lives.

Last names are loaded. It influences us more than we like to admit.

My intention isn't to break the family structure or anything like that. I am only asking everyone to be more intentional when choosing last names for themselves or their kid.

If you belong to a collectivist system that works for you and assures peace and stability for the family, then by all means take your husband's name. There is nothing wrong with that as long as you are convinced that it is right for you.

But if you are part of the growing community of women who want equal partners, nuclear families and a sense of individuality, then think twice before making these decisions. Think about the example you're setting for your marriage and your children.

Don't take a decision to soothe the ego of your partner or his family. This is a battle worth fighting.

And honestly, let your child be its own person. Give it a new name totally unrelated to yours. Let it be whoever it wants to be.

Or give it the mother's first name and level the playing field for the world.

Or maybe eliminate the last name altogether. Like Beyonce. Or Zendaya.

There is no right answer. Take the decision that makes sense for you and your kid.

Receive stories by Aditi Balaji in your feed
Aditi Balaji
Read next: I’m a Strong, Independent Woman but I Still Can’t Say ‘No’