How getting Rid of All My Old Underwear Was Lifechanging

by Angie Craig 5 months ago in fashion 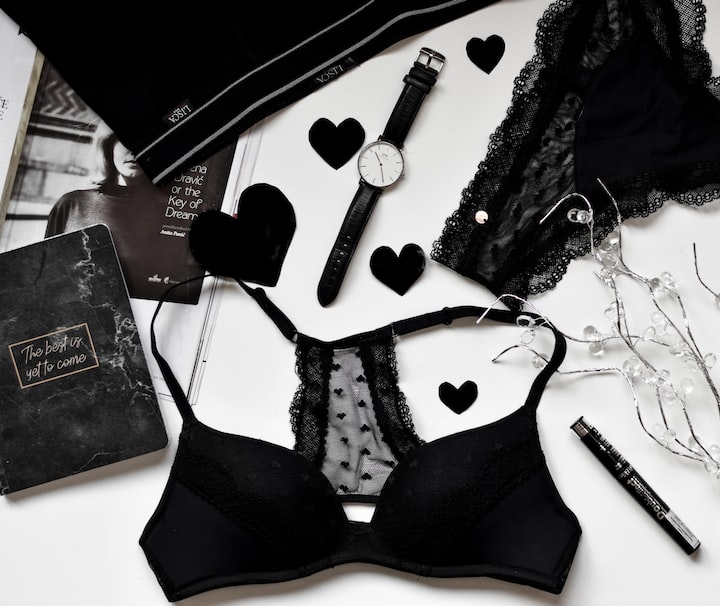 Photo by Danijela Prijovic on Unsplash

I hear my friends talk about their sexy underwear, the corsets they wear on the weekends, the French knickers and push up bras, in general that feel good factor you feel just before getting into bed with their husbands. I remembered that feeling well, ever since my teens I always wore nice/sexy underwear, but after hitting my 40s and my husband throwing away most of my sexy underwear, I seemed to of stopped caring however, I didn’t realize just how much I stopped caring.

One morning I rolled out of bed, washed, and opened my underwear drawer to start getting ready—and I was horrified by what was looking back at me.

My bras, once were petty, sexy, and feminine, were now ratty, stretched out and faded. My once beautiful underwear so old and full of holes, bad stitching to hold the underwire in place had started to come away and way too many mamma pants. It was a bleak scene. my underwear drawer was only fit for grannies, but not any grannies that I knew. This draw used to be my source of strength and sexiness but now it was just a f*cking mess. I used to take so much pride in my underwear draws, everything placed nicely, folded and tidy but now; everything thrown in and in a f*cking mess.

Looking back over the last 4 years and lack of sex I have had in said years, this wasn’t a dry spell, this was a fucking life style choice, but I didn't remember making the choice, it’s not surprising that my underwear drawer looked like a post-apocalyptic relic and not the mad max apocalypse at that. The last few years I’ve had it hard, mini breakdown, lost my mother, quit my job, had another breakdown, broke my marriage, put on weight, lost it and put it on again, health suffered and one illness after the other than COVID-19 hit hard.

I felt like a loser, a failure a complete down and out and completely worthless. That is not exactly the hottest feeling in the world is it? my sex life suffered. I was in survival mode, not siren mode. My clothing, both visible and underwear, took a hit as a result. During this time, my sex life was no longer existed, but I was okay with that.

But that was then, in the cold bedroom that I have not slept in for almost a year, looking into my granny drawer, wearing my sweatpants and oversized t-shirt, where was I going? What was I doing, this wasn’t me, "how could I go from being a sexy kitten into a flabby granny in my early 40s"?

It was then that I realized that I needed a change. I wanted, no I needed my sexy back, and I was going to start with my underwear drawer.

But instead of just relying on the same stretch cotton and sports bras that I typically did, I was going to finally indulge in some lacy underthing’s. Brining up 3 children, with a husband that never worked, buying lingerie was always the ultimate indulgence for me and I would save for months just to buy a nice looking bra because at the end of the day, rent, kids and food always come first.

I always told myself that once the kids lift home I want to invest in some amazing lingerie but, look at me, kids left home, grandbaby running around and at 42 years old I had not brought any new underwear for years. I relied on bargain underwear, knickers that come in packs of 5 and sports bras. were they sexy?, "fuck no" did they make me feel womanly? "fuck no" were they heavy duty that kept everything covered? absolutely they did, My grandmother would be proud of those knickers.

“Tossing out the old undies felt like I was cutting ties with a part of myself that no longer served me I was saying goodbye to the sad, depressed woman, who spent her days in leggings and cried herself to sleep at night .

"And it was the most amazing feeling” They were a part of the life I know longer wanted, after the last argument I had with my husband 3 years earlier my husband throw away all my sexy underwear, because if we wasn’t having sex than in his mind I no longer needed them and I just never got around to replacing any of it, because in my head, who would I be wearing them for anyway, I forgot all about me.

I had a little extra income to splurge on some bras and such. We was in the middle of COVID-19, I was lucky because I had been able to keep hold of my new job, but instead of spending money on things we didn’t need, I saved it, the only problem now was that we was in the middle of the second uk lockdown, I needed a complete overhaul of all my underwear and to do so I would need to buy off line and shopping online really wasn’t something I was used to doing.

The first package to arrive was a pair of stockings, the silky smooth feeling on freshly shaved legs was not only sexy, but empowering aswell, I decided that the next day I was wearing them under my jeans to go to work the next day. I’d replaced my old-self with a newer, more confident person who felt good in her skin.

After that, every time a package arrived, it felt like it was Christmas morning. I would do a little fashion show for myself, no one else just me, myself and I and the transformation I felt was instant and incredible. Slipping on the new underthing’s, only for me, was like wearing Wonder Woman’s arm cuffs. I felt unbelievable confident, regardless of what I was wearing on top of the underwear, jeans, leggings it really did not matter, underneath it all, I had superpowers. It was surprising that the foundation of my new found transformation came in the form of my new underwear. From there I started dressing in clothing, not loungewear, and I started feeling better about the way I looked. I started brushing my hair better and taking more care with my make-up, who knew that my underwear would mean such a transformation?

My underwear overhaul is a luxury I know I can’t really afford, but I’m investing in myself and the future me, don’t get me wrong my underwear isn’t all lacy and frilly, but it’s what I find sexy and empowering, just something I’m excited to wear each morning that no one else is going to see but me.

And that’s the point I missed before, my underwear was for me, but somewhere down the line I lost sight of that.