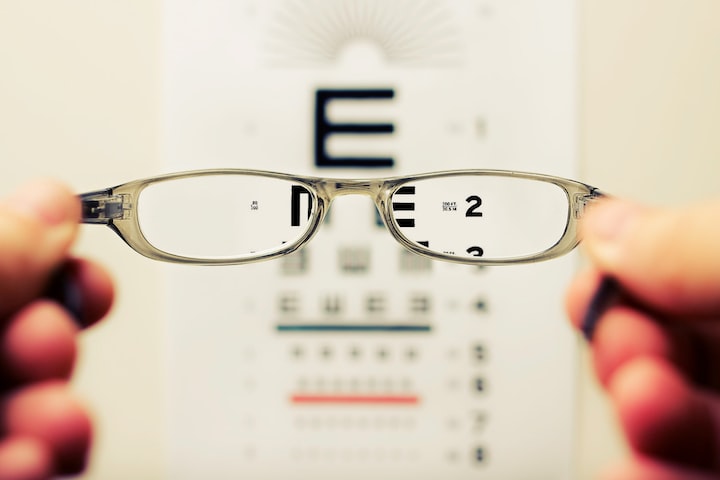 Photo by David Travis on Unsplash

I always have, or very nearly. I was two when I got my first pair, bifocals at six, and exercises that I very very vaguely remember...one was something to do with a number of chocolate chips spread on the table in front of me and if I got the real one I got to eat it. If I got the "ghost" one they would take one away. Being crosseyed meant seeing double, so they were trying to train my eyes to work properly. Another was something with a pair of cords strung with beads out in front of me, and I imagine it was to test depth perception.

I know this because I haven't got good depth perception, even now. That issue is a good chunk of the reason I had a few rear-end car accidents when I first started driving; I hadn't learned to compensate for speed.

I had LASIK when it was still pretty new, and considered cosmetic, and it brought my eyes all the way up from negative seven-something (about 20/800) to 20/20 in my right eye, and 20/22 in my left.

It was a freaking miracle.

You read stories about how people would cry because they could suddenly read their alarm clocks, but me? I cried because I could shave my legs in the shower... and see what I was doing. I also spent about a month backed up against a wall because suddenly even my peripheral vision was clear. It didn't really help with the crossed eyes, though, although it didn't take me long to learn to compensate.

And then about 15 years later, I started getting headaches. Nothing major, just mild headaches. Every day. After a couple of months of that, I went to the doctor. He referred me to my ophthalmologist.

But over 45. You can focus on the book or phone or computer screen, or you can keep your eyes from crossing. Trying to do both will net you a headache.

Well, what do you suggest? Reading glasses, and the good news is that drugstore cheaters are fine for you; looks like... yep, a 1.50 prescription, and if things start getting problematic again before your next eye exam, just get the next point-two-five up.

Hey! Forget drugstore cheaters, dollar store cheaters are the way to go. I can afford to get them by the handful, in all different colors and patterns (this was before constant masking, when we found a new accessory to play with).

Where this ties into mental health does not have to do directly with the glasses or the changing prescription, but it's very similar.

When I was in my early forties, my dad asked me if I could cope without antidepressants. My answer to him was this: Sure, I could. That is, I could if I didn't have to be part of the world, go by other people's schedules, attend work or school, etc. The same goes for people on ADHD medications, for instance. Or any other medication that affects the brain.

As an example, just as the reading glasses take over the focusing work from my eyes so I can keep them from crossing by myself, so do citalopram and melatonin produce neurotransmitters for me so my brain doesn't have to do it (or as much of it). Same with my CPAP machine; it basically nudges my respiratory system so my body doesn't have to wake me all the way up to get me breathing in a steady rhythm again.

The stigma around mental health has got to stop. Most people wouldn't deny me glasses to help me see, but somehow feel justified in saying that I could bootstrap if I wanted to - just plow through depression and anxiety and even ADHD if I tried hard enough.

And neither does the brain.

Read next: Ecofeminism: alternatives in defense of life and the environment