by Chidimma Benjamin 8 days ago in feminism 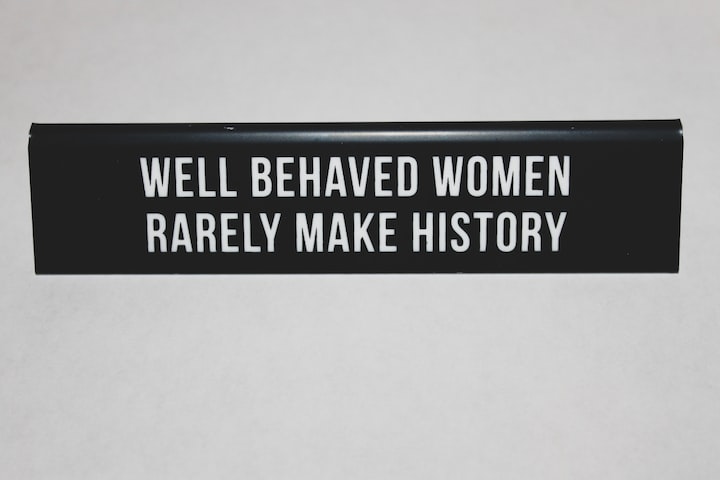 According to Britannica, “Feminism, the belief in social, economic, and political equality of the sexes. Although largely originating in the West, feminism is manifested worldwide and is represented by various institutions committed to activity on behalf of women’s rights and interests.” There are many different types of feminism but here are five.

Anarcha-feminism is a combination of anarchy and feminism. It is described to be an anti-authoritarian, anti-capitalist, anti-oppressive philosophy, to create an "equal ground" between all genders. Anarcha-feminism suggests the social freedom and liberty of women without needed dependence upon other groups or parties. In this case, men and patriarchy. Some famous anarcha-feminists do to more research on are, Virginia Bolten, Voltairine de Cleyre and Lucía Sánchez Saornil.

Womanism (or Black feminism) is a social theory based on the history and everyday experiences of women of colour, black women in particular. The term was first used by author and poet, Alice Walker in her short story “Coming Apart” in 1979. She describes a womanist as "A woman who loves other women, sexually and/or nonsexually. Appreciates and prefers women's culture, women's emotional flexibility ... and women's strength. ... Committed to survival and wholeness of entire people, male and female. Not a separatist, except periodically, for health ... Loves music. Loves dance. Loves the moon. Loves the Spirit ... Loves struggle. Loves the folk. Loves herself. Regardless. Womanist is to feminist as purple is to lavender."

Furthermore, according to Walker, while feminism is integrated into womanism, it is also instinctively pro-humankind; womanism is a broader category that includes feminism as a subtype. The focus of theology is not on gender inequality, but race and class-based oppression. She sees womanism as a movement for the survival of the black race; a theory that takes into consideration the experiences of black women, black culture, black myths, spiritual life, and orality. Walker's most quoted phrase, "womanist is to feminist as purple is to lavender", implies that feminism is a component beneath the much larger ideological umbrella of womanism. Some black women may identify as womanists rather than feminists due to the unfortunate fact that black women’s voices are often ignored and even disregarded in white-dominated feminist spaces. Other womanists to check out are; Clenora Hudson-Weems and Chikwenye Okonjo Ogunyemi.

Lesbian feminism is a cultural movement and critical perspective, most prominent in the 1970s and early 1980s (specifically in North America and Western Europe), that exhorts women to prioritise their efforts, attention, relationships, and activities towards their fellow women rather than men and often advocates lesbianism as the logical result of feminism. It arose due to the supposed disappointment with second-wave feminism and the gay liberation movement. Some famous lesbian feminists include; Audre Lorde, Babara Smith, Cheryl Clarke & Sheila Jefferys. one of the key themes of lesbian feminism is the analysis of heterosexuality as an institution.

Atheist feminism is a branch of feminism that also advocates atheism. Atheist feminists hold that religion is a primary source of female oppression and inequality, believing that the majority of religions are sexist, misogynistic and oppressive towards women. Atheist feminism also condemns sexism within the atheist population. One of the earliest known atheist feminists is Ernestine Rose who was born in 1810 and was raised in a Jewish family. Other atheist feminists include Annie Laurie Gaylor, Ayaan Hirsi Ali and Sikivu Hutchinson.

Ecofeminism is a branch of feminism that sees environmentalism, and the relationship between women and the earth, as fundamental to its analysis and practice. Ecofeminists draw on the concept of gender to analyse the relationships between humans and the natural world. The term was pioneered by the French writer Françoise d'Eaubonne in her book Le Féminisme ou la Mort (1974).

Ecofeminist theory declares that capitalism reflects only paternalistic and patriarchal values. This notion implies that the effects of capitalism have not benefited women and has led to a harmful split between nature and culture. In the 1970s, early ecofeminists discussed that the split can only be healed by the feminine instinct for nurture and holistic knowledge of nature's processes.

Since then, several ecofeminist scholars have made the distinction that it is not because women are female or "feminine" that they relate to nature, but because of their similar states of oppression by the same male-dominant forces. The marginalisation is palpable in the gendered language used to describe nature, such as "Mother Earth" or "Mother Nature", and the animalized language used to describe women. Some discourses have linked women specifically to the environment because of their traditional social role as a nurturer and caregiver. Ecofeminists following in this line of thought believe that these connections are illustrated through the coherence of socially-labelled values associated with 'femininity' such as nurturing, which are present both among women and in nature. Some well-known ecofeminists are; Petra Kelly, Wangari Maathai & Lois Gibbs.

A black cynical nerd with opinions and poetry. Don't be shy, drop a tip. Preferably $20.

See all posts by Chidimma Benjamin →