by John Edwards 2 years ago in baseball

Zach Britton could make the best team in baseball even better

The 2016 playoff series was unique in how we saw relievers used. We saw Buck Showalter punished brutally for not bringing his closer into a high-leverage situation in a tied game on the road; we saw Terry Francona ride his relievers all the way to Game 7 of the World Series; and we even saw Clayton Kershaw come out of the pen and dominate.

It was weird, to say the least.

In 2017, the Dodgers are evidently looking to learn from the Indians and Cubs by building a super-bullpen. Per Jon Heyman, the Dodgers are looking to trade for Zach Britton — the best relief pitcher of last season. Pairing him with Kenley Jansen would give the Dodgers undoubtedly the most lights-out bullpen in baseball, and also shore up the 8th inning in the playoffs (where the Dodgers gave up 10 runs to the Cubs in the NLCS).

Britton could also have other suitors. Any playoff-bound team would love to have a lights-out closer like Britton, especially the Nationals, whose bullpen ranks 29th in FIP — Washington stands to continue their trend of early exits in the playoffs if they can’t shore up their bullpen.

Instead, Britton might be better suited to fill the “super-reliever” role pioneered by Andrew Miller last season. Instead of coming in during the 9th inning and finishing off the last of the opposition, a super-reliever comes in during the highest leverage part of the game, and shuts the opposing offense down.

Here’s a hypothetical — it’s the 7th inning of Game 5 of the NLDS. The Dodgers have a one run lead, but the Nationals have a runner on second with only one out, and Bryce Harper is at the plate. Who do you put in the game to face one of the best hitters in the game with the season on the line?

The answer is the super-reliever. Super-relievers don’t come into the game at a particular time, and they might not enter the game at all, but if there’s a chance that the home team could lose the lead in a certain situation, a manager should put in their best reliever. Saving a closer for the 9th inning doesn’t make a lot of sense because the game could easily be lost before the 9th inning.

With the acquisition of Zach Britton, the Dodgers might find their super reliever. Here’s a comparison of Britton’s FIP in low, medium, and high-leverage situations to Andrew Miller, the archetypal super-reliever, over the past 3 seasons. 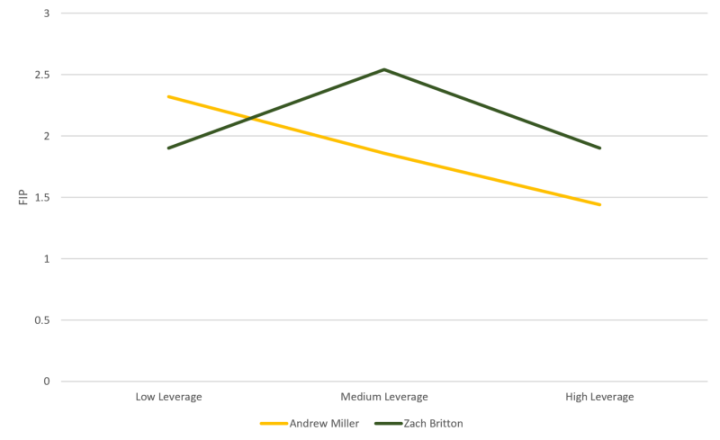 Britton isn’t the ultra-super-reliever (which would be Miller, who is insane in high-leverage situations), but Britton still performs excellently with the game on the line.

But it’s time for a bamboozle! I don’t think that Britton should be the Dodgers’ super-reliever. I think it should be Kenley Jansen. 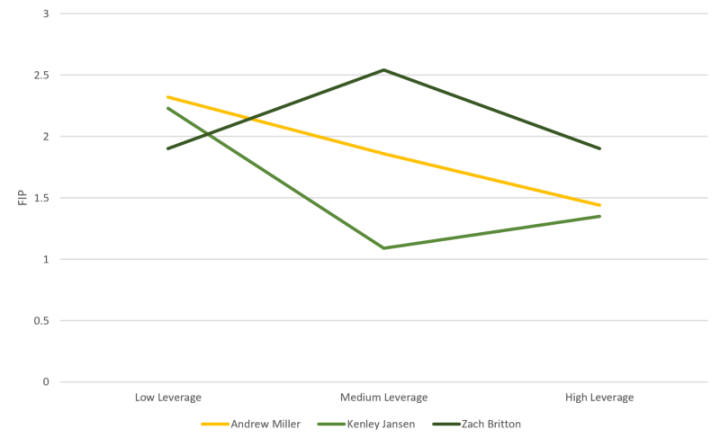 Jansen has outperformed Miller every step of the way. Jansen is probably the best reliever in the game. Jansen could out-relieve the ultra-super-reliever Miller if he was used in that role.

The Dodgers could use Jansen in this role if they brought Britton on as their “traditional” closer to close out the 9th, and their backup super-reliever (we’re getting really elaborate with the titles, aren’t we?) — in the same manner that Cody Allen was used in tandem with Andrew Miller.

Dave Roberts has done this before. In the NLDS, Jansen was brought in during the 7th inning after the Nationals threatened to retake the lead in Game 5, and it worked brilliantly. After Jansen tired, Roberts was forced to go to Clayton Kershaw to record the save. By adding Britton, Roberts can avoid using Kershaw out of the pen, and instead turn the ball over from the best reliever in the game to the third-or-fourth best reliever in the game.

Coupled with their hot offense and terrific starting pitching, this makes the Dodgers the best team in baseball, unquestionably so. The World Series is the only limit for them.

Staff Writer for The Unbalanced, Contributor at Sporting News.

See all posts by John Edwards →