Trying to loving it, when it's Hurts

by Blake A Swan 8 months ago in football
Report Story

A look into the Philadelphia Eagles Situation 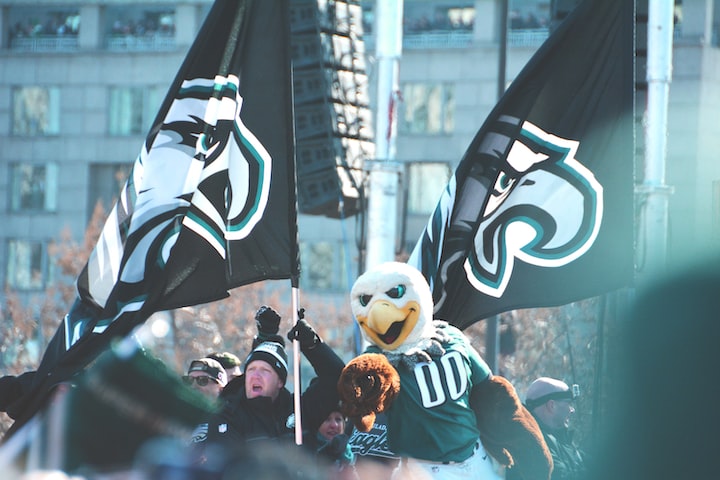 Photo by Casey Murphy on Unsplash

While I am grateful, it’s also a reminder of the flaws in our perception of the sport. A sport that glorifies the fraternity of coaches and criticize the young men that judge got out of college for being immature. This weekend is a fresh reminder of the glorification and idolization afforded to coaches. Look no further than former college coach Urban Meyer. Meyer, who has always taken the easy way out, was looking very easy in his bar. A bar he decided was more important to visit than getting back to the team of young men he’s supposed to mold and grown men that depend on his success to pay the bills. How did he spend that time?

I'm not gonna try to shame Meyer for this particular conduct. We are all human. Yet, this reality is rarely if ever afforded to the players he coaches.

Young men who must endure supreme scrutiny as their head coaches can treat the program like a frat house to them and their buddies.

This behavior isn’t new to college coaches. Rick Pitino had several incidents under his regime and he’s back coaching. Les Miles had a number of allegations as LSU against himself and players and he will be back coaching. Even legends at schools like Florida State and the current coach of Alabama have had issues with arrest during their tenure. Honestly, it can be written off as the costs of winning. Most big programs are doing it. Don't think that part deserves any credit.

Why all the focus on coaches?

Why are we bringing up Urban Meyer? Well, let’s listen to Eagles coach Nick Sirianni's press conference. Explaining his game plan and performance. I apologize to Eagles fans in advance for any frustration this video may cause.

Coaches are always given the benefit of the doubt, even when they clearly don’t deserve it.

Their careers are longer. Good business to make friends with them. Easily offended and trust you don’t offend any coaching trees. They protect their own. However, if I played that clip for you, would you believe that was an NFL coach? A head coach, no less?

There's plenty of debate about how someone who presents themselves like this got the job. Maybe he’s a great guy. I have no ill will towards him. The issue with him is that he’s allowed to mess up. He’s afforded the opportunity to learn on the job that few people get. As a lion’s fan, I watched Jim Caldwell go 9-7 and take us to the brink of the playoffs and be fired.

Only to have the team cannot match his win totals and become a dumpster fire under Patricia. Then we hired... Dan Campbell.

I’m not a huge Jalen Hurts fan. I also have some integrity. While there are plays that have been left on the table, we must understand what he is. Hurts right now is a serviceable NFL QB. Perhaps one of the worst things you can be. Except, there are a lot of QBs out there that are barely serviceable right now.

Shall we let the Steelers fans into the chat? How about Atlanta fans? How about Lions’ fans?

Looking at the rookie QBs this year, are they performing any better?

Maybe then we can decide if Hurts should get some credit as an NFL QB. Even better, let’s compare him to another QB and see how we feel.

What do you think? If you don’t recognize those numbers, then I’ll continue by comparing their first seasons as the full-time starter. How would those look?

Entering their first full season as the Starter

How about their career stats?

In the 2021 season, Jalen Hurts has nearly the same completion percentage as his fellow OU alum at 66.2% to Mayfields 65.5%

That’s right, everything about Jalen Hurts game and career is nearly identical to Baker Mayfield. Including the stat trajectory and their splits. They each:

Hell, they share the same height at 6 feet 1 inches.

WHY ARE WE SO DISAPPOINTED IN HURTS?

People love Baker Mayfield. Much like Jalen Hurts, I’m neither here nor there on him. They both have been given systems to hide their respective weaknesses, and each leave plays on the field. You can win with both of them.

Yet, neither of them has shown they can make the biggest plays when you need them. It doesn’t mean that they are incapable.

The only way you learn is through experience and they’ve had their failure. Point being that if you could take a Baker Mayfield that doesn’t have the antics, supported his team after getting benched, and is nothing but class, why wouldn’t he be celebrated.

Philadelphia has its own Baker Mayfield

Based on their performance and statistics, it’s the same guy. That’s what drove me to look. When I watch them play, it’s the same guy and unsurprisingly their stats matched. Yet, one is lauded as a star NFL quarterback on a team filled with First Draft Talent. One includes a career with:

Something to think about

We started this conversation talking about the enormous credit we give to coaches. The mental gymnastics needed to create the surrounding mythology. Even the inexperienced and lost coaches. Picking which ones can learn on the job. All so we can try to support the person fans can most identify with. Fans, we're just like coaches... right?

I think Philadelphia can get behind the unsexy quarterback on the roster. A quarterback who is playing exactly like his OU predecessor.

You know, the one we continually praise for his performance?

Maybe it’s because Cleveland’s in a small market. But maybe, just maybe, it’s because we’re picking who can be average while they develop. Just like we pick and choose who can underachieve as they learn to be a head coach.

However, considering our adoration for Rick Pitino, Les Miles, and Urban Meyer, maybe there’s a deeper issue going on.

NCSA Strength and Conditioning Professional certified as a CSCS, TSAC-F, and CPT. I have my FMS Certification as well, and spent over a decade working with athletes in various sports. Including youth, high school, college, Olympic and Pro.

More stories from Blake A Swan and writers in Unbalanced and other communities.