Neither Lebron nor KD Paved the Way for Superteams, but They Perfected It

by Dan O'Shea 2 years ago in basketball

Originators of the superteam? No. Perfectors? Absolutely

Boys and girls, the word of the day here is “superteam”.

The NBA Finals and the playoffs as a whole have revolved around this word. Whether it’s being thrown around in sentences like “Kevin Durant joining a 73-win team is the most stacked superteam of all time,” or “LeBron’s just mad someone made a better superteam than him for once,” or even “why did we even try to win 50 games we can’t beat this superteam, we could’ve been golfing a month ago,” you’ve heard it time and time again. By now you know it’s the combination of a minimum of three superstars joining together like one giant Morphing Power Ranger to just blow past everyone that gets in their way.

For some reason, superteam has a negative connotation to it, as if giving yourself, your franchise, and your city the best chance to win a championship is one of the seven deadly sins. Even players themselves pass around the phrase like a hot potato, with the most recent instance coming from Kevin Durant claiming LeBron paved the way for him to join the Warriors. 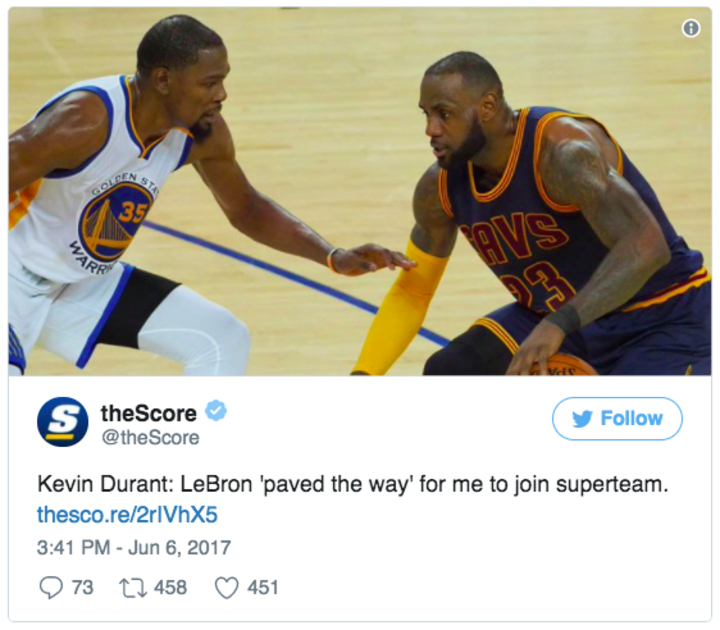 He sounds thankful in the way he describes how LeBron’s decision helped him with his, and showing every player it’s “free” agency, but doesn’t think sound like he’s just looking to pass the blame down?

Realistically, there is no blame for either of these players when it comes to creating a superteam. There have been plenty of players acquired in the past to create championship teams, but if you’re looking at pairing All Stars together in recent memory, the “blame” lands on the 2008 Celtics team. 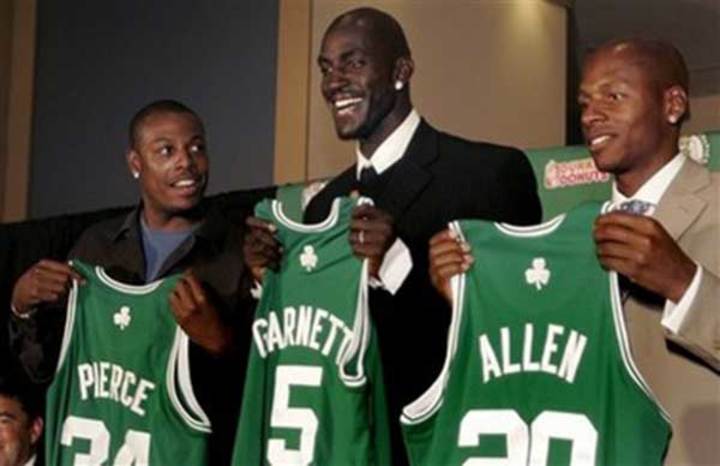 There are a few differences between the Celtics’ model and how the LeBron teams and current Warriors were built. Clearly the way these teams formed is different, but the combination of talent is on a completely different level.

This isn’t to take away from the accomplishments of Pierce, KG, or Allen. All three are first-ballot Hall of Famers in their own rights, brought a championship to the storied rafters of Boston in their first season, and still claim their starting five never lost a series together before they broke up and treated Ray Allen like a leper. It’s the simple fact that this team was a finely tuned oiled machine, but they were never unstoppable. Just look at their stats heading in the ’08 Finals.

FACT: 2008 Finals Lakers vs Celtics Kobe was the only player to average over 20 points and 5 assists. — @kobeTruthNlight

You compare that to LeBron’s Heat, Cavs, or the current Warriors, and it’s not even really that close on paper. The difference is, the Celtics created an actual team. Offensively Pierce was the go-to scorer, KG was a pick and roll monster, and Allen buried teams from beyond the arc as one of the best shooters of all time. That’s a team. These teams took that idea, and completely remade the mold.

That mold isn’t just because the stars are more unstoppable as individuals. It’s how they did it. First it started with the Heattles down in South Beach, all signing as free agents with Miami on their way to two championships in four years. While LeBron was winning two of the seven championships he promised to Heat fans, the Cavs loaded up. They had three first overall picks in four years, turning them into Kyrie Irving and Kevin Love (via trade).

The Warriors on the other hand, are pretty much completely based out of a phenomenal draft history. They picked three of their four superstars outside of the top five, including Draymond Green in the second round. Then they went along and added a little player known as Kevin Durant this year.

That’s the beauty of these superteams. There’s no true blueprint on how to create one. Boston traded for two stars. The Heat signed two to join Wade. The Cavs used free agency, top draft picks, and a trade to create theirs, and Golden State combined three home run picks with a ton of cap room left open for Durant in free agency. The model was made before them, but these teams developed the superteam into something the 2008 Celtics can’t even come close to.

Instead of playing the blame game and pointing fingers at one another, just accept that these teams created something that has never been seen before. Durant certainly got on board after he sent this bad boy out seven years ago.

It’s insane that LeBron, Durant, or anyone else on either team is shying away from this. This is the third straight matchup between these teams, with the final matchup coming after two of the most dominant playoff performances in NBA history. And if you think this isn’t going to be the same matchup for another few years in the future, you clearly haven’t been paying attention.

It’s like teams would actually rather be this team. 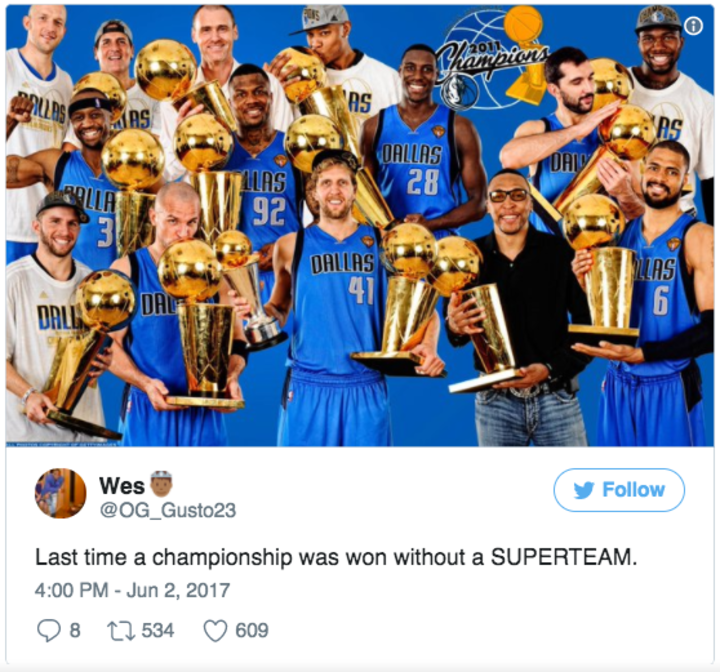 than the current Warriors or Cavs. Yes, there’s something admirable about winning without a gang of superstars but guess what? That’s not happening for a long, long time. These two teams made sure of that by perfecting the superteam.

See all posts by Dan O'Shea →