by Marjorie Roden about a year ago in hockey

In spite of having one of the strongest opening periods seen in Bell MTS Place by the Winnipeg Jets in a while, a sudden flurry of goals from the Edmonton Oilers in the third period squelched the home team’s hope of a victory Tuesday night. The game ended with a 5-4 overtime win for the visiting Edmonton Oilers, led by their captain Connor McDavid.

Second Goal over a Starfish 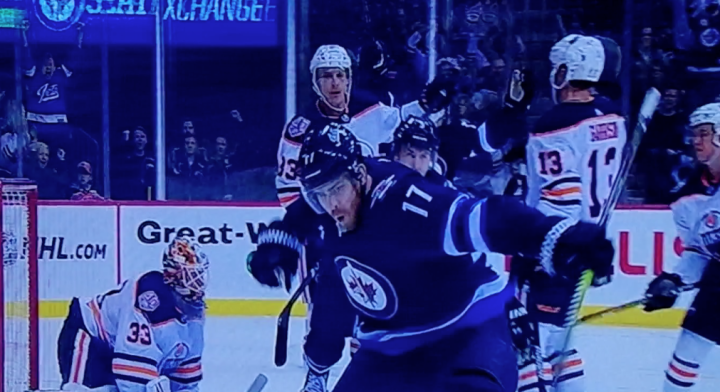 Adam Lowry celebrates his second goal of the night over a sprawling Cam Talbot. Photo from TSN Broadcast

4:31 of the first period saw Adam Lowry score on a rush, off a pass from linemate Brandon Tanev. Then, less than three minutes later, at 7:47, Lowry blasted one over the sprawled out like a starfish Cam Talbot, putting the home team up by two before the midway point of the first period.

11:50 saw defenseman Dmitry Kulikov being called for tripping, which led to Connor McDavid catching a feed from Leon Draisaitl, putting the shot past Connor Hellebuyck at 12:49.

22 seconds later, a blueline blast shot came from the Jets’ Ben Chiarot, off the nifty pass from Ehlers. Then, at 18:15, it looked like the Oilers had scored again, but Hellebuyck literally threw his back into his work, neatly flopping himself on top of the puck, back first, stopping the puck from going into the net back of him. Then, at 19:10, the Oilers were called for having too many men on the ice. 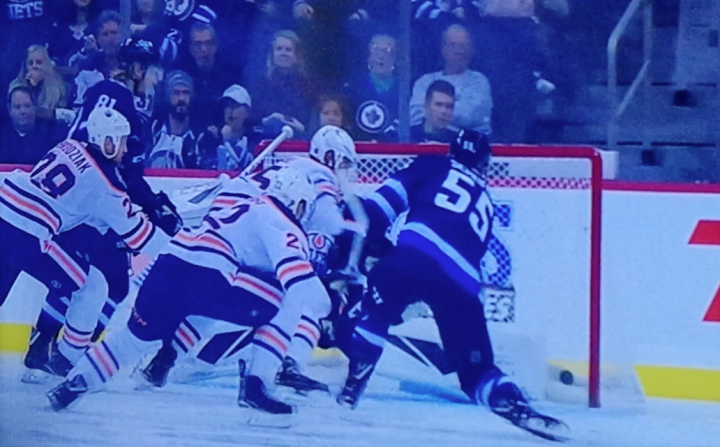 Off the deflection and in, Mark Scheifele puts one in on the open side of the cage. Photo from TSN Broadcast.

The home team was up by a pair going into the second period, and also had a power play to work with, which they took full advantage of. At 1:02 of the second period, a tic-tac-toe play took place, seeing the puck passed from Josh Morrissey to Patrik Laine, who shot the puck on net. Mark Scheifele was standing near the open side of the yawning cage and pounced on the rebound to get the biscuit in the basket, putting the Jets up by three.

The tide turned a bit as the Oilers’ Milan Lucic was penalized for high sticking the Jets’ Ben Chiarot at 9:19, and the Oilers managed to kill off the penalty. Although the Jets did come close to scoring a few times, with sniper Laine getting a few high quality shots off, the looks of the players on the benches showed, the energy was shifting a bit. 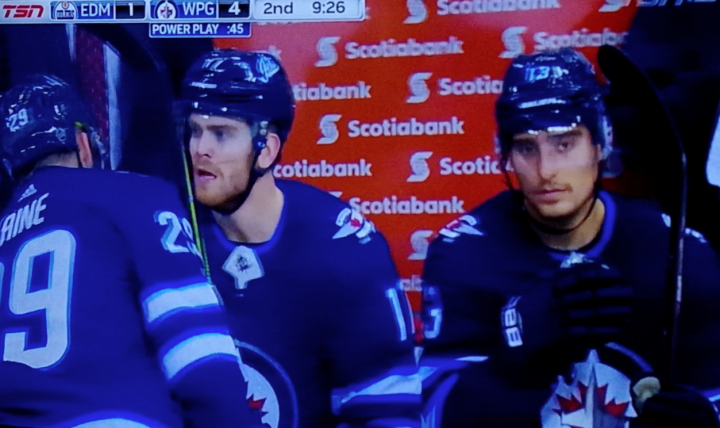 After Patrik Laine's very close chance of putting the Jets up by four during a power play, the energy levels began to waver a bit. Photo from TSN Broadcast.

In fact, in the dying minute of the second period, Hellebuyck’s crease was full of bodies, with quite a pile collecting up to his right hand side.

A Huge Pile of Bodies in the Goal Crease 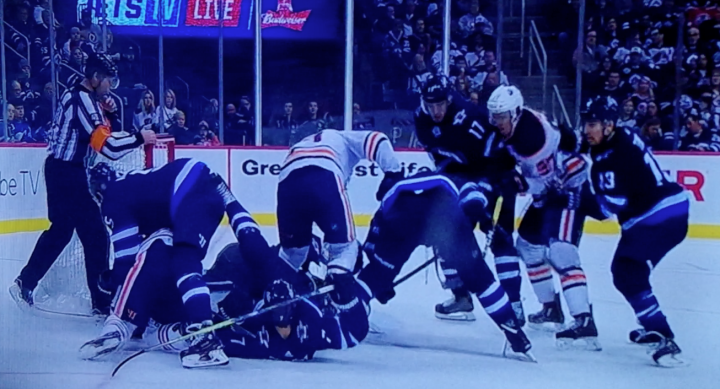 Not quite a game of twister, but still a rather disconcerting conglomerate of sticks and skates flying about uncontrollably. Photo from TSN Broadcast.

Although the Jets’ Kulikov was trying to laugh it off, everyone else looked a lot more stern once the whistle blew. 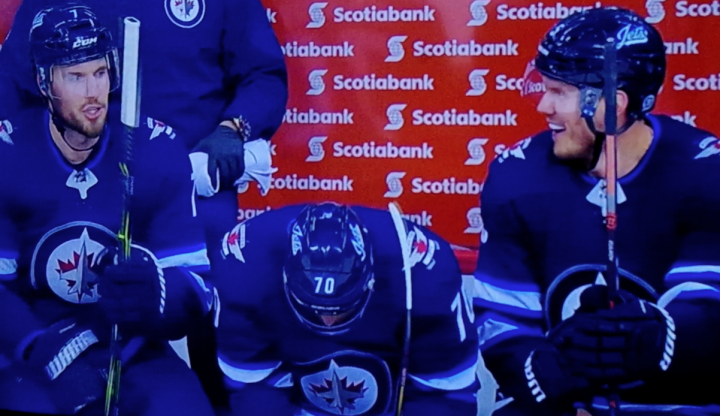 Although the Jets’ Kulikov was trying to laugh off the whole scrambled scenario, everyone else looked a lot more stern once the whistle blew.

This energy shift carried over in a huge way at the beginning of the third period, as 18 seconds into the frame, the Oilers' Ty Rattie got his first goal of the season off a pass from captain McDavid. At 1:41, Andrew Copp was called for holding, and during the ensuing Oilers’ power play, McDavid scored his second goal of the night, putting the visitors within one.

The physical play from the second period carried well over into the third, which resulted in penalties, including the aforementioned one against Copp. In fact, Lucic had his second trip to the sin bin at 10:22 when he took a ferocious charge at the Jets’ Chiarot. However, the Oilers were able to kill off the penalty, even with all of the shots the Jets put onto the net.

Once the penalty was killed off, the Oilers tied up the game on a goal by Jesse Puljujarvi. The goal was the first of the year for the Swedish rookie, off a set-up by McDavid. This forced the game into overtime, which saw the Oilers’ Darnell Nurse weave through the neutral zone, eventually around one of the Jets guarding the point at the blue line, and past Hellebuyck to win the game at the 1:25 mark of the 3 on 3 overtime. The Jets, although having lost in overtime, still came away with one point.

Always solid on the blue line, Morrissey was one of many bright points. 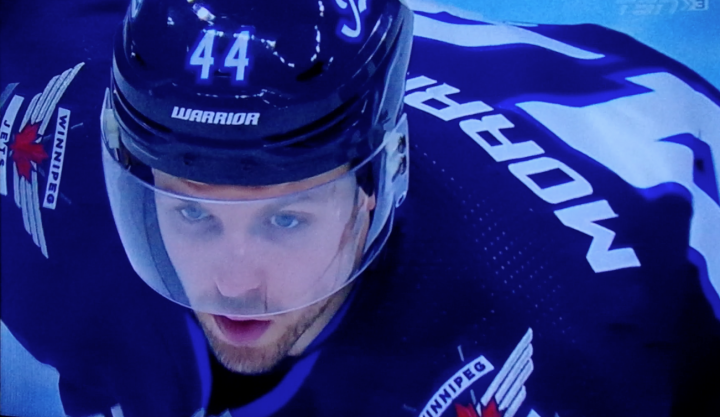 Even with the shifting energy, Josh Morrissey stayed pretty solid with the play, right down to the final buzzer. Photo from TSN Broadcast.

FINAL THOUGHTS: It is understandable why the usual Jets’ post game show did not take place after the loss. Certainly, after having had the lead for most of the game ripped away from them in the last 20 minutes of the game would be enough to even put the most cheerful, optimistic person into more than a slight anti-social mood. Playing against a team with one of the highest goal-scorers in the National Hockey League is a huge hurdle to overcome, but the defensive players were all doing what they could to stop him without getting penalties for their efforts. In fact, all of the slowing down of him that was able to be done was relatively effective towards the latter part of the game, and not one penalty was called. But once all of the ice had settled, looking at the statistics, there were a number of positives which could be taken away from the game for the hometown Jets, who still have four more games to play on their home stand. One set of numbers would have to be the power play, as the Jets were 1 for 3 on the power play in this game. Also, looking at another set of numbers, such as those on the scoresheet, ADAM LOWRY’s pair of goals were both equally amazing, and helped to keep the energy up for the home team in the first half of the game. And as far as players with streaks going on, there are three men who each have that feather in their caps, with PATRIK LAINE (2 points with a goal against Carolina and an assist tonight), BRANDON TANEV (with an assist in each game) and JOSH MORRISSEY (with three assists over the last two games). So long as the Jets are able to keep those positive thoughts and facts with them going into their game on Thursday night against the Vancouver Canucks, and don’t allow any sibling rivalries take over the game (unless it can be used to annoy the big bro with the ‘Nucks, whom is being beaten in the points department and especially in the plus/minus department, but who’s counting!)..... Never mind, forget I typed that!

The Jets host the Canucks at Bell MTS Place. The puck drop shall take place at 7 pm Manitoba time.

I make dramatic and documentary films, and have been known from time to time act and create visual art. And I also love hockey, hence why I write about it a lot! I also work professionally as a freelance writer and photographer in Canada!

See all posts by Marjorie Roden →