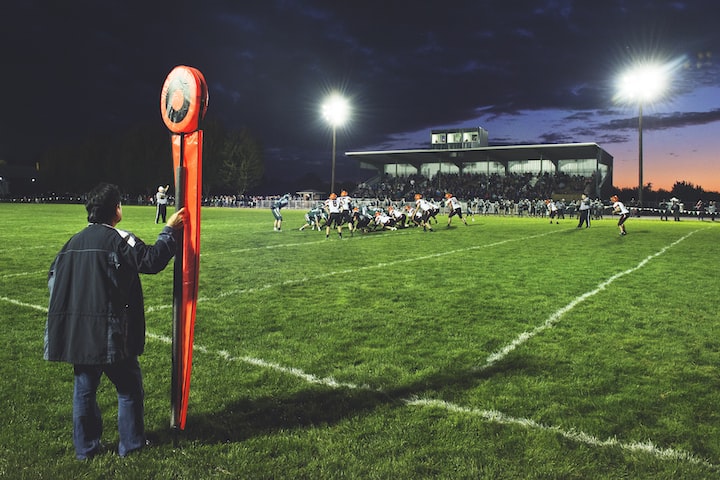 Friday Night Lights in Small Town Friendly is nothing less than extraordinary. The sight of a packed high school stadium; sounds of cheering fans, cowbells ringing and drum beats from competing bands. The smell of freshly buttered popcorn, grilled to perfection hamburgers and hotdogs permeate throughout the quintessential American scene.

High-powered halogen lights illuminate the night and light up the field of play. Fresh manicured grass, perfectly chalked out lines with goal posts at corresponding ends, makes for a true patriotic pastime. Football for most of the world means soccer however American football is uniquely our own.

Playing quarterback and free safety for my beloved Central High is an honor I had waited to achieve since the promise I made to my tear stained reflection as a 12-year-old when my Paw Paw died. The promise: be the best football and basketball player Small Town Friendly had ever seen.

Last year, as a defensive back, I could act like a rabid dog, a wild animal, before the game and right before we took the field. Amp’d up ready to taste my own and the blood of my enemy. However, as a starting QB, you needed to remain calm and collected. You are tasked with so many responsibilities it requires a more silent, focused aggression.

Last year I would sprint full speed through the banner held by our cheerleaders, giving high fives and piling on my teammates on the sideline. I would soak in all the sights and sounds and use them as fuel to energize my mind, body and soul. Cold chills would invade my spine and tears would visit my eyes.

However, as the offensive commander, I’m the last man to take the field instead of a full sprint I come out with a focused jog, I forgo the piles and head to the sidelines away from my mates and warm up my arm with our receivers coach. My subconscious sees the first 5 plays we had perfected in practise. My goal, set the tone and tenor early, keep the defense on their heels, unable to expect a run or pass.

I’m so locked in on our game plan since Coach Grissom gave me the latitude to call my own plays once the initial 5 are in the can. It’s as if the stadium is empty. The only sounds I hear; my own breaths thru my mouthpiece and Beethoven in the distance.

Our first game of the year is against our cross-town rivals, East High. It’s an Instant Classic. A pivotal moment comes just before halftime. Neither offenses could gain traction and impose their will. This typically happens at the beginning of the season. Most defenses are ahead of offenses. It became a defensive battle.

I had already secured an interception. East attempted a Hail Mary to close the half however, I thwarted their plans with my second interception of the half. As I’m bringing the pigskin back, I’m attempting to take it to the house, i.e. end zone. I run approximately 40 yards, as I’m crossing midfield. Out of nowhere, I’m hit by one of the hardest hitters to grace a Cavalier uniform, Levette.

I can take a hit as well as anyone, however I get bent backward in the pile and didn’t realize I sustained a hip pointer. I’m not sure what a hip pointer is. All I know is it feels like my hip is stretching out of its socket.

I’m a Ledbetter Warrior. We never quit, never relent. I would complete the game in my hobbled state. The game would go into double overtime. My friend Earl would kick the game-winning field goal, propelling the Cavaliers to victory. I cried silently in my helmet at the loss.

I would spend each day before and after practise in a hot tub filled with ice. The only treatment for a hip pointer is an ice bath. The injury a painful one, but the twice daily mental anguish of stepping my half naked body in the ice tub was just as excruciating.

My teammates didn’t help matters. The tub is in the hallway of our locker room where everyone walks by. The idea is to get in the tub, don’t move. After about 10 minutes, the prickly pain of a thousand needles being stuck in your midsection evolves to numbness.

Finally, being able to breathe, any quick movement starts the process all over again. Each knucklehead walking by thought they were original comedians by raking their hand through the ice and, sometimes, grabbing a handful to eat. I know right. My screams after each passerby made for a locker room full of laughter at my expense.

Next up, our other county rival, Chase High. Coach Bud, our offensive line coach, knew what a herculean effort on my part to take the field with such an injury. I hear him yelling at our line during battle. Treat him like gold, boys, you gotta protect him and treat him like gold.

It’s a hard fought battle. I go to the sideline during a timeout. I’m laboring. It’s late in the contest we finally have a great drive going. Coach Grissom must see in my eyes I’m fading. He says in his rough growly voice with a wad of chewing tobacco in one cheek. Come on Big En, we need you! It helps to snap me back to life.

I hit my junior midget teammate Tim on a crossing pattern and he took it to the house for the winning score. Our first victory of the young season. Winning a football game feels like such a monumental accomplishment. The physical nature of the game ensures every muscle in your body hurts however, the feeling of victory is euphoric.

Football players are warriors who literally put life and limb on the line each Friday night across this great nation for their team, school, and community. Friday Night Lights in Small Town Friendly is one such example.

More stories from Timothy Kincaid and writers in Unbalanced and other communities.