An Open Letter to the Fencing Club Poor Sport

by Deborah Moran about a year ago in culture
Report Story 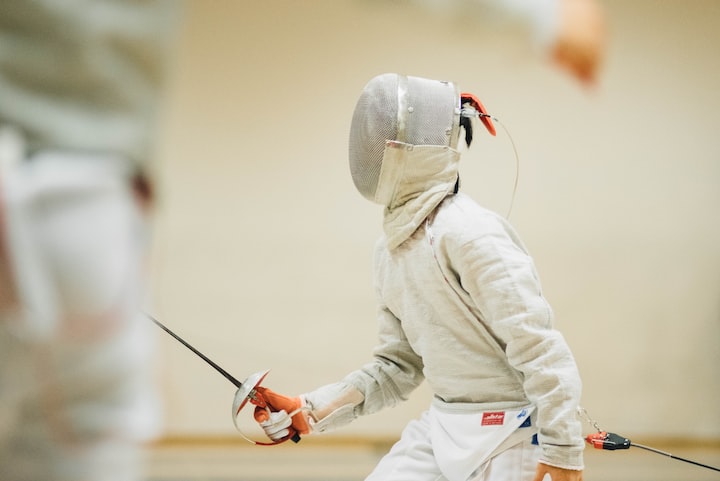 Allow me to make my role clear to you, sir. I am your opponent.

That means – I oppose you.

It is not my job to stand there like a crash test dummy and uncomplainingly absorb all your too-hard whip attacks. If I know that you like to use too-hard whip attacks, the evidence of which I am now wearing on my arm and back in the form of long purple bruises, I am going to keep using point in line to keep you at a distance with the point of my sabre, because I don’t like absorbing too-hard whip attacks. Please know that your heavy-handed, flailing-n00b’s style has all the finesse of a compound fracture, and seeing as how I don’t like pain, I will go to extensive lengths to avoid it. Please also be aware that fencing is a sport, not an excuse for you to beat the snot out of people with a three-foot metal whip, and that anger management counseling resources are available for people like you.

Also, if I know that you like to take all year to prepare your attack, I am going to attack very fast and without warning into your preparation, because I know that attacking very fast into your (decades-long) preparation will allow me to skunk you five to nothing in every bout, every time. I am a cross-trained foilist as well as a sabreuse, and yes, tip attacks are legal in sabre even if you don’t like them. Seeing as how you are a fortysomething grown man (with a medical practice from what I hear) it does not become you to piss and moan to our coach like a spoiled little boy because I know some attacks that you don’t know how to counter, just as it is not my job to stand there and be your crash-test dummy.

If I have found an effective way to skunk you five to nothing (in every bout, every time) the only logical conclusion is that your current strategy in fencing me is not working. That means that it is now your job to find a strategy that does work, because I’m not ever going to let you win, even if I am just a mere female in your estimation. Neither am I ever going to go easy on you to salve your (clearly enormous) ego, because you torqued me off but good with your stubborn insistence on employing the abovementioned too-hard whip attacks even after I pointed out to you that you were using unnecessary force on the strip and that it is indeed possible to score a point without breaking your opponent’s blood vessels. Hell, I can do that, and I’m just a girl!

Also, please carry on with that Man-of-One-Attack thing for which you are rapidly becoming famous. I love it when n00bs like you do that absurd “Wall of Steel” thing where you come at me rotating your sabre in a circle in front of you. You may think it’s all s00pah-badass to do that and believe that it covers all areas of attack, but seeing as how you rotate your blade slower than a ten-ton mill wheel, all I have to do is wait until it clears twelve o’clock and then stab you in the throat with my blade-tip yet again. You show no signs of realizing that the Wall of Steel is not really a wall at all but actually a foolproof means of guaranteeing that I will continue to go stabbity stabbity on you for five points to your none for some time to come.

You might want to acquaint yourself even a little with sabre right of way rules sometime soon, because at this time, you seem to think that right of way is something that you always always have, even when you are retreating down the strip with your arm bent and I am advancing on you at full speed with my arm fully extended. If you counterattack after I land a successful attack, the point is mine, and you do not get a point because the action stops after I score my point, and both opponents cannot score a point in the same action in sabre. Those are the rules as established by the FIE, and they aren’t going to change them just because Little Ol’ You wants a point real, real bad.

You got beat by a girl.

Not only did you get beat by a girl, said girl took fifteen points to your three in three five-point bouts, and said girl skunked you five to nothing in the latter two bouts, and in doing so, knocked you out of the second elimination pool in the club tournament. I have two words for you, sir – EPIC FAIL.

Also, since your current strategy in countering me on the strip consists of whining “Make her stop doing that!” at our coach, it appears that I will continue to skunk you (in every bout every time) for the foreseeable future, so please carry on doing what you’re doing. Coach is maintaining his characteristic Russian inscrutability in front of you, but I think he rather enjoys seeing us mere females holding our own on the strip. Please try and listen when he says something logical like: “Try and take her blade with a quick advance” or “If she goes in with a point attack, you parry it and riposte.” Coach is making a great deal of sense as always, and it would be a good idea to listen to him. Plus it would be a mere courtesy not to make such a personable and hardworking fellow repeat himself over and over again.

But I know you won’t listen to him, which means I will continue to skunk you (in every bout, every time) and seeing as how I really enjoy winning, especially against raging blowhards of your sort, please, carry on as you were. In the meantime I am sure the tequila I am bringing Coach for his birthday will go some ways towards alleviating his frustrations with poor sports like you.

In conclusion, sir, since you cannot see fencing for the noble and ever-fascinating art that it is and it appears that no new ideas can be cudgeled through the impenetrable wall of your stubborn cranium, I am certain that you will soon be attempting to get your sadistic groove on through some other activity, which process I intend to hasten by skewering your throat and sternum on the point of my sabre as often as possible. I have seen your Neanderthal kind come and go many times over the years, and when people like you leave, no one misses you but the club accountant.

In the meantime, however, it’s always fun to have someone in my elimination pool who I know I can skunk in every bout, every time, and your gyrations of fury when I do it are just precious.

Deborah Moran has been a creative writer since she completed her first short story at the age of six. Her interests include literature, journalism, art history, combat sports, cooking, gardening, horses and dogs. She lives in California.

More stories from Deborah Moran and writers in Unbalanced and other communities.