Why Republicans Should Love Mayor Pete

by Edward Anderson 10 months ago in politicians

The reason why they don't is the very reason they should.

Pete Buttigieg is surging in the polls, recently beating such heavyweight names as Senator Elizabeth Warren and Senator Cory Booker, he also came within spitting distance of Senator Bernie Sanders. In fact, the only other candidate that Mayor Pete, as he is commonly called among his supporters, is former Vice President Joe Biden, but that might not be an issue should Biden bow out of the race before entering it. Such is Buttigieg's popularity that Republicans have already started the war machine against him in the hopes of giving Trump a boost before potentially facing him in the general election. And how are they attacking the potential 2020 candidate by using the very things they would support, and even rally around, one of their own candidates for.

During his first term as Mayor of South Bend, Mayor Pete took time off to go fight in Afghanistan. While under normal circumstances this would be praised universally, today's Republicans have tried to turn this into a negative thing. They have tried to paint the rising Democrat superstar as a typical Millennial that can't commit to anything. You can almost hear them shaking their fists and yelling at those damned kids to get off their lawn.

Nevermind their own presumed candidate dodged being drafted with a phony medical condition. If Buttigieg had an 'R' beside his name they would hold him up as a patriot, but because he is a Democrat, he must be demonized for defending his country and letting his small town down while on deployment. Better to have a doctor commit fraud than follow orders.

Is this what you want? 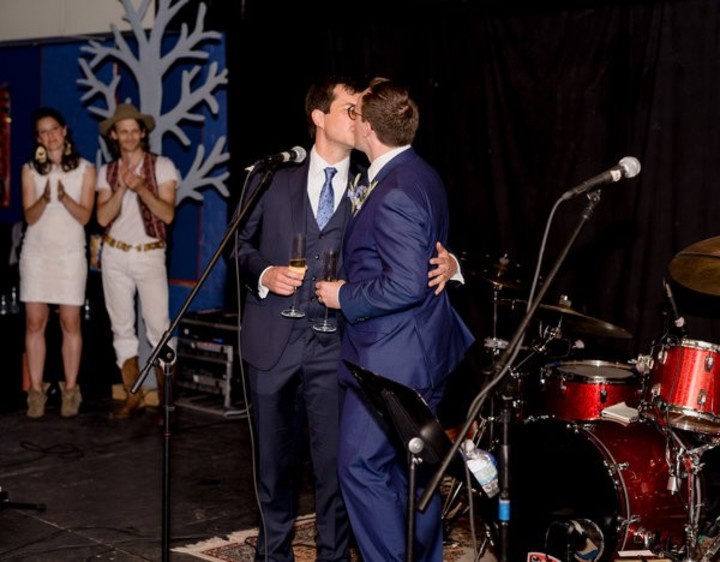 As we saw with President Obama and First Lady Michelle Obama, Republicans do not like when a couple is openly loving. This will make them attack the relationship and say derogatory things. Let the wife take off her clothes, that's classy. Being openly affectionate and faithful, that is an affront to everything they stand for. Mayor Pete and Chasten have already come under scrutiny for kissing after Pete's announcement that he is officially seeking the Presidency. Emails went out with the picture of them kissing with the question "is this what you want?" As if a loving gay couple is somehow going to tear at the moral fabric of a country that locks kids in cages torn away from their families, because the occupant of the White House is openly racist. But you know family values.

Since he announced his candidacy in 2015, Trump has attacked and insulted any person who disagrees with him. Sure, an argument could be made that he did this beforehand, but for this argument, we are focused on his political career. At one point or another, he insulted Jeb Bush (sleep or low energy), insinuated Ted Cruz's father was the Zodiak Killer, and said Megyn Kelly had blood coming out of her face. Once he turned his attention to Democrats, Republicans cheered him on. The most famous moniker given (thus far) has been Crooked Hillary. This despite many people in his administration and those he surrounded himself with being charged with various crimes. After being investigated, they cheered he was exonerated because a 4 page summary (of a 400 Page report by Mueller) said there was no evidence of collusion or obstruction, though neither of those things are true. Despite this, Trump has resumed his collective wars on the media (FAKE NEWS), Hillary Clinton (despite her being a private citizen), and anyone else who disagrees with him. All with the support of the hefty Republican PR machine aka Fox News.

Mayor Pete has simply stated that he is religious and finds it atrocious Mike Pence uses his faith in an effort to harm the LGBTQ+ community. Republicans have lost their mind over this assertion. They question Buttigieg's faith, "How can he be gay and a Christian?" It's mindblowing to them the two are not mutually exclusive. Or another attack that has been making the rounds is, "he's not really gay, he's doing it for political points." As with most assertions from the Trump era Republicans, this has no basis in fact, evidence, or reality but it plays well to the base so there's that. The most recent attack about his sexuality came after Buttigieg made an appearance on Ellen and made this statement:

“I’m not interested in feuding with the vice president,” said Buttigieg, “but if he wanted to clear this up, he could come out today and say he’s changed his mind, that it shouldn’t be legal to discriminate against anybody in this country for who they are.”

This assertion was too much for the Republicans though, and they decided Mayor Pete was gunning for the VP to gain publicity. In their reasoning, the Rhodes Scholar had decided since everyone else was taking pot shots at Trump, he needed to differentiate himself and went after the #2. Somehow this argument made sense to them and they have really attached themselves to it.

An alternative title to this article could have been Republicans are hypocrites but it seemed redundant. The very reasons they should love Mayor Pete Buttigieg are the ones they revile him and are actively trying to dismiss his candidacy as anything other than the historic, groundbreaking campaign it is.