by Whitney Smart 11 months ago in controversies

The Dangers And Effects Of Oppression. 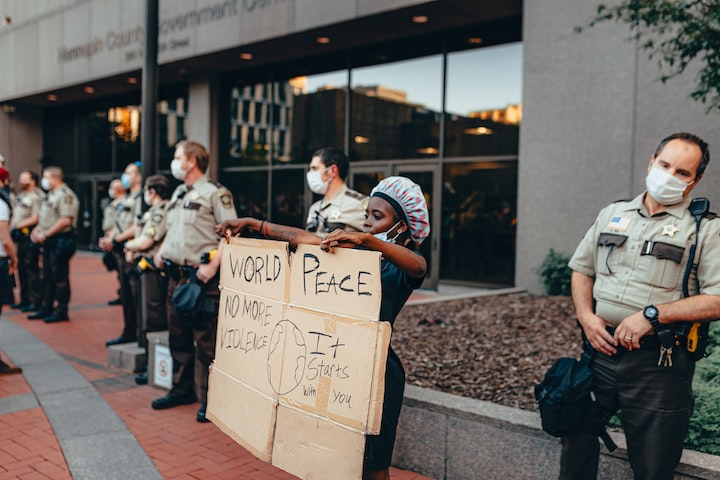 Photo by Josh Hild on Unsplash

Being oppressed, no matter what demographic you fall within, is a dehumanizing experience. Like all traumas, we all process things differently. For some of us, when we experience being oppressed, we actively do everything within our power to stop it from happening to others. Because we understand what it does to you negatively as a person, we would never inflict that on another and actively engage in destroying systems of oppression. However, there are some of us that choose to take a different path; the path of actually wanting to become the oppressor.

I was listening to Ebro In The Morning on Hot 97.1 FM in New York last week. He made a statement that "Some Black people just want to be white" in reference to a conversation about the police brutality in Nigeria, with the SARS controversy becoming magnified internationally. This comment jumped out at me because I recognized the absolute truth in it. And this isn't limited to issues regarding ethnicity. I have seen this kind of reaction and behaviour demonstrated in many other oppressed people. R. Kelly is one of the biggest examples in my lifetime of a person who was allegedly severely sexually abused for many years as a child and later on in turn became the worst form of abuser himself. This is also apparent in countries going through political and religious turmoil, where one religion was oppressed but then rose up to power and instead of liberating everyone, they in turn started to oppress the group of individuals that oppressed them.

We also see this with women as well. There have been women who were brutally and viciously oppressed by men and so when they had male children or any form of control over men in any capacity, they took the opportunity to oppress them in whatever ways they could. There are a myriad of ways that this particular form of trauma shows up for some people who make a decision to become an oppressor. And make no mistake, it IS a decision one makes, whether it is a conscious or unconscious one. There is always a moment before we take any action where we think about what we are doing and why. In that space, we can choose to proceed with an unhealthy choice or behaviour or we can choose to not engage in it. But for most of us in this head space, our unchecked needs tend to rule and we will hurt others at the expense of getting our own needs met.

This is so extremely dangerous. Oppressing others because we were oppressed achieves absolutely nothing. While there may be the temporary high of having power and control over another person, it is always short lived. There has never been a situation I have ever observed where an oppressor doesn't eventually receive justice. Very rarely do I see oppressors get away scotch-free on anything, especially in these times of social media and wokeness. Yet, even knowing this, some people will still continue to act out their unhealed traumas in this way. We are seeing this in Nigeria, where the after effects of colonization have left deep seated roots of white supremacy and colourism even in an all Black society. In colonized nations, it is extremely common for Black people to be pitted against each other and separated by status and class which bears remnants of the caste system. So even in predominantly Black societies, these scars are still very fresh as most African nations that overturned colonial rule, still deal with the aftermath and affects some 60 plus years later. This shouldn't be surprising considering that in my mother's lifetime, segregation and colonization were still rampant and very much alive.

Oppression is defined by Merriam-Webster's dictionary as "unjust or cruel exercise of authority or power." Oppression has nothing to do with being physically bigger or stronger than a person. It has everything to do with being in a position of power or authority and using that power to unjustly or excessively exercise it. Oppression can also show up in many different ways. Parents can oppress their children, particularly when they have done unhealthy things. Some parents threaten their children and produce high states of anxiety, permanently damaging their kids all so they can keep their secrets. Some unhealthy men who are physical abusers oppress their partners, children and whole family systems with their uncontrolled anger and rage. This can manifest in physical, emotional, mental and spiritual abuse. Some bosses, particularly in the corporate world, oppress their employees and direct reports, simply because they can. There are some people in leadership who take the opportunity to flex their muscles and will oppress people at work in different ways. Whether it is berating and demeaning employees in a meeting or publicly humiliating them in front of their peers, they take the time to go out of their way to oppress people because in some ways it makes them feel "bigger." These are unfortunate realities many marginalized people face every day and in many cases, can never do anything about.

This is why self awareness and inner work is of the utmost importance right now, in this time of shift and change. We all need someone we are accountable to that can help us identify what our shadow side is and help provide a safe space for us to do the work and understand why we are the way we are. If we're not willing to look deeply at ourselves and our motivations for things and check our unhealed traumas, we can end up in a cycle for the rest of our lives where we are mutually oppressing others and at the same time being oppressed by others. In oppression is judgment, insecurity, self-hatred and ultimately self-loathing. It is much easier to project these very uncomfortable feelings onto other people and then use them as our reason to abuse people in whatever ways we do. But when we realize that everything we sow we reap, then hopefully we can make better choices and decisions.

In this time of awakening, my greatest hope and prayer for everyone is self-awareness. I cannot impress more how important it is to not only take time for self reflection but also ensure we have systems of accountability set up in our lives and inner circles. When we are fully present and aware of how we show up in this world and are being of service in the highest and healthiest ways possible, this is where the true healing and work begins and lies.

Receive stories by Whitney Smart in your feed
Whitney Smart
Read next: New Mexico—It's like a State, like All the Others!