The Grass Is Green, Politicians Lie and Voters Don't Fact-check

by Michael Trigg 2 months ago in controversies

Having the privilege of living in a democracy should not cause us to believe all we are told by elected officials and those seeking election. 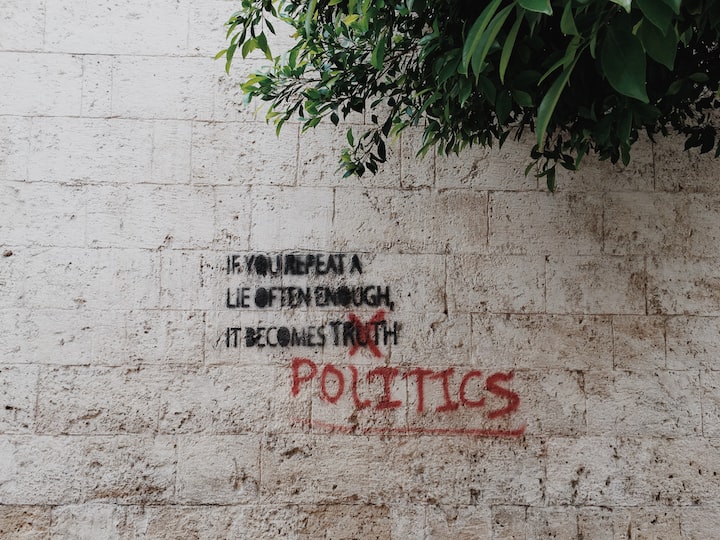 Photo by Brian Wertheim on Unsplash

If you repeat a lie often enough it becomes truth (not to everyone but to many people). A good example of this is the "stolen" 2020 USA election lie. When it comes down to truth in politics, substituting the word "truth" for "politics" has a great deal of certainty in it. It has long been known that when politics enters the room through one door, truth leaves through another. And, personal truths, on many levels, go hand in hand with corruption.

Of the least corrupt countries in the world, New Zealand, Denmark, and Finland are ranked highest and are regarded as the least corrupt nations in the world, consistently ranking high in transparency according to Wikipedia’s Corruption Perception Index. Seen as the most corrupt country in the world is Somalia, scoring 8–10 out of 100 since 2012. All countries around the world are evaluated on a 100-point scale based on the trust that international experts and business leaders have in public and government institutions in the rated countries.

The Corruption Perceptions Index 2018 finds the United States in 22nd place, with a score of 71. The USA is right behind France but ahead of the United Arab Emirates – just. Canada slid to its lowest level in at least a decade on the global index, driven down by the SNC-Lavalin Group Inc. scandal. Canada was ranked 12th of 180 countries on Berlin-based Transparency International’s 2019 Index in an annual worldwide list from the least corrupt country to worst. Canada ranked ninth in 2018 and sixth in 2010. While Canada had the best score in the Americas – 77 out of 100 —, the country has slipped four points since last year and 12 points since 2010, the data shows.

So why do politicians lie? Why do voters elect politicians who they know are deceitful if not downright liars? Much has to do with a voter's own personal belief system? Do people believe a lie because they want to believe it to be true? A good case in point for this position is the followers of Donald J. Trump and his stolen election lie. The "Trumpsters" may not actually believe the elction was stolen but they are so beholden to Trump they have convinced themselves it be true in spite of all the factual evidence to the contrary.

British people elected scruffy Boris Johnson as the prime minister, the ex-mayor of London who unlawfully shut down parliament to escape democratic scrutiny and who told blatant falsehoods whenever it suited him. Johnson casually denied core elements of his Brexit deal, such as the need for customs checks between Britain and Northern Ireland. He lied to the English people about prawn flavored potato crisps (potato chips in North America) claiming the EU had banned them when the truth was, they had done no such thing.

In 2016, United States voters faced a choice between a presidential candidate whose campaign statements were accurate 75% of the time and another whose claims were false 70% of the time, according to many fact-checking outlets. Americans chose Donald Trump, who has made more than 30,000 false or misleading claims since assuming office. When I say misleading claims, they include lies, downright lies, and total fabrications and distortion of facts. According to Trump and his mouthpieces, truth as espoused by liberals and mainstream media is fake and their truths are true. therefore, black is white and white is black.

So who do we have to blame? Us? The voters? What is it about humans that we listen to and believe people we know are lying to us? Is it because we as humans would rather be lied to than hear brutal truths? Or, do we just hear what we want to hear? It reminds me of the old Paul Simon song "The Boxer". The line goes: a man hears what he wants to hear and disregards the rest."

Since the age of civilization, therefore the age of permanent settlements and the ensuing need for councils and leadership, there have been leaders who would do anything and say anything to grasp and retain power. One just has to look at history and the litany of despots, murderous leaders, dictators, and evil warlords who aspired to take control of other people to understand what a certain percentage of humans are about. Greed and power.

What is it about human beings that they will believe thieving and lying leaders? It has long known that people can be divided (loosely)into two groups. Leaders and followers.

This is the 21st century. Let's all vote intelligently. Let’s all make a difference by voting and voting rationally. Please fact-check all the verbiage your local and federal politicians espouse. The world depends on your vote.