by Timothy Leister 13 days ago in history

One hundred fifty-seven years later, the short address from the Nation's 16th President still stands out as one of the finest speeches ever given. 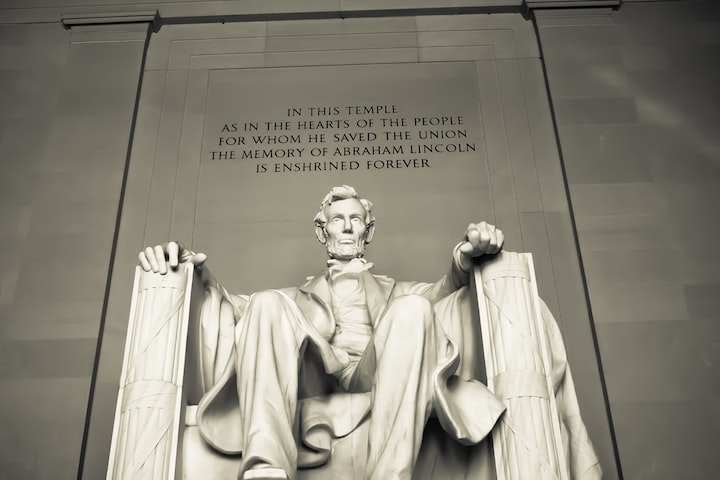 Photo by Joshua Bedford on Unsplash

On a cold November afternoon in southeastern Pennsylvania, President Abraham Lincoln delivered his most remembered speech as a politician.

Nearly five months earlier, the Union army withstood a barrage from the Confederacy that nearly allowed the rebels to enter the northeast from where they could have toppled the fledgling American nation.

The Battle of Gettysburg still stands as one of the deadliest single battles in American history, only overshadowed by battles from the two great wars.

Less than two years after the address, Lincoln would be shot dead by an assassin's bullet from the revolver of John Wilkes Booth.

Today, let's review the Gettysburg Address in depth to recall exactly what Lincoln was saying in an historic context.

"Four score and seven years ago our fathers brought forth, on this continent, a new nation, conceived in Liberty, and dedicated to the proposition that all men are created equal."

Of course, this lead sentence harkens back to the founding of the United States of America when the Constitution was ratified in 1776.

Lincoln's words of "on this continent" are incredibly specific for a strong reason. He mentions the continent due to the fact that the Confederacy was still in full swing and still had an outside shot at victory in the Civil War. I believe these words were deliberate because Lincoln was looking at the nation rebuilding as a whole, that spread from sea to shining sea.

His next words, "conceived in Liberty" refers to the birth pangs of the nation during the revolution when the fledgling nation was not free from the tyrannical reign from Britain. Liberty specifically means freedom from arbitrary or despotic control and the positive enjoyment of various social, political, or economic rights and privileges. This freedom is a reason for the nation's coming to being, or being conceived.

Finally, "dedicated to the proposition that all men are created equal." This sentence most certainly refers directly to the issuing and effect of The Emancipation Proclamation. In that case, Lincoln was taking a small jab at the Confederacy due to the enslavement of vast populations in the South. The proposition, or idea, that all men are equal isn't using gender bias. Men should be effectively read as man, referring to mankind.

"Now we are engaged in a great civil war, testing whether that nation, or any nation so conceived, and so dedicated, can long endure. We are met on a great battle-field of that war. We have come to dedicate a portion of that field, as a final resting-place for those who here gave their lives, that that nation might live. It is altogether fitting and proper that we should do this."

The above paragraph can be read as is. No further detail is needed on this as Lincoln is very clear in his language.

TLDR: "We are at war with each other, and are here today to dedicate this battlefield to those who gave their lives at this battle so that this nation may live on."

"But, in a larger sense, we can not dedicate, we can not consecrate we can not hallow this ground. The brave men, living and dead, who struggled here, have consecrated it far above our poor power to add or detract."

The above paragraph is quite possibly the most important piece of this short, but powerful speech. Lincoln is simply saying that the words and deeds of the gathering of people that day pale in comparison to the actual actions performed by the men who fought and/or died at Gettysburg.

The men who fought and/or died at Gettysburg have done far more than anyone, including Lincoln himself, could do to add to the heroic acts of the days from July 1 through July 3, 1863.

"The world will little note, nor long remember what we say here, but it can never forget what they did here. It is for us the living, rather, to be dedicated here to the unfinished work which they who fought here have thus far so nobly advanced."

Lincoln again is repeating what he said in the previous paragraph, but doubling down. He's saying that his words, or the words spoken by anyone else at the dedication of the battlefield at Gettysburg, will be long forgotten when compared to the actions of the Union and Confederate troops.

He adds to it at the end of the paragraph though, stating that the job of the living is to dedicate themselves to furthering the cause of freedom. That freedom is what was fought for by both the Union and Confederate troops, as freedom was being fought for on both sides of the war.

"It is rather for us to be here dedicated to the great task remaining before us that from these honored dead we take increased devotion to that cause for which they here gave the last full measure of devotion - that we here highly resolve that these dead shall not have died in vain that this nation, under God, shall have a new birth of freedom, and that government of the people, by the people, for the people, shall not perish from the earth."

In his final sentence (yes, it is a complete sentence, despite being quite possibly the longest run-on sentence in written history), Lincoln redefines their reason for being at Gettysburg on that day. They were there to renew the vision of freedom brought forth from the Founding Fathers in the Constitution as that is what was truly being fought for at Gettysburg.

Lincoln had a full understanding that "The Great Experiment" of the United States was coming under unbelievable pressure after just 85 years of existence. The Confederacy was fighting against the Union after succession due to a slightly differing belief in how the nation should be governed. Jefferson Davis was not to be a King, but there were harsh differences in governing structure and the economies of the North and South.

The understanding of Lincoln of what was at stake though was that if the United States did not continue as it was, but splintered into two nations, that "The Great Experiment" would be deemed a failure and those freedoms that were fought for should not disappear from the Earth.

It clocks in at a mere 271 words. Those are 271 of the most deliberate and clear words ever spoken. The speech can be delivered in less than two minutes. But this speech will live on as one of the most powerful examples of political speech and rallying a nation that we may ever see.