The Fall of Icarus

by cd ybarra 27 days ago in opinion

Moving Forward in the Era of Gun Violence 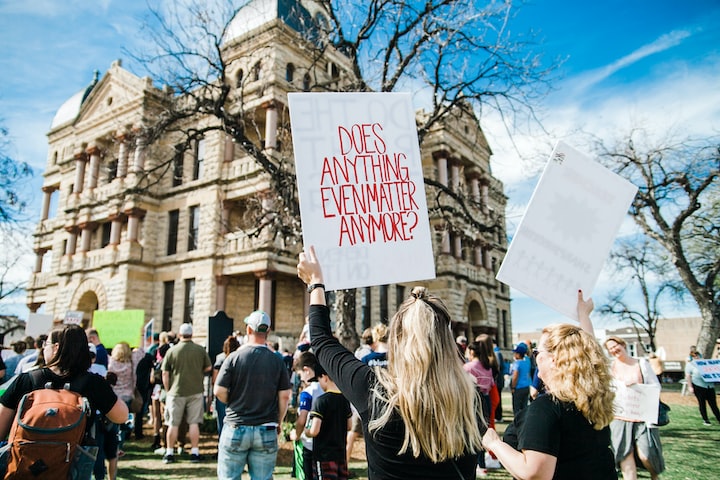 Photo by Heather Mount on Unsplash

The mass murders of eight people in Atlanta and 10 in Boulder were only 6 days apart. 144 hours, 8,640 minutes, 518, 400 seconds. How many times have we lived through this? How many more times must we go through this before something is actually done?

How do we continue living our daily lives knowing that we could be out watching a movie with friends, in a restaurant with family, or out grocery shopping when shots are fired? It is overwhelming to the psyche when you really think about it.

We handle this pain and grief by moving forward and blocking the reality of gun violence out of our circle of protection. Like the shepherd and the field hand in the painting, Landscape with the Fall of Icarus, we have to avert our eyes and pretend that these horrible things haven't really happened. To do otherwise would likely paralyze us in place. Especially when we are unable to take action to turn the tide.

I don't believe as others do, that this painting reflects our indifference to our fellow human's suffering, rather, I believe it is about our limited capacity to face pain and suffering over and over again. We just don't have that kind of bandwidth to deal with trauma, because we have to put aside our own fear in order to live.

In 2020, we have experienced 29 mass shootings, according to the Violence Project. There is nowhere else in the world where this compares. I believe that gun violence is so prevalent, in the United States, because we have easy access to them.

The laws in Georgia allowed the perpetrator to buy his gun on the day he murdered eight people. The only requirement was that he pass a background check. No cooling-off period required. Georgia, incidentally, has the 14th highest gun death rate in the United States.

The laws in Georgia allowed the perpetrator to buy his gun on the day he murdered eight people.

There is no Federal law requiring a waiting period to buy a firearm. A gun dealer, can, in fact, ignore completing a background check and sell a firearm if the FBI is unable to complete that check within three days. Private sellers do not have to perform a background check on the buyer at all. The buyer can take immediate possession of their firearm unless prohibited by state law.

Why a cooling-off period? A waiting period can actually reduce impulsivity that often leads to gun violence and suicide. According to an article published in 2015, "Expanding the waiting period policy to states that do not currently have it would prevent an additional 910 gun homicides per year. Waiting periods would therefore reduce gun violence without imposing any restrictions on who can own a gun".

The United States is only one of three countries that protects gun ownership under the constitution. According to a 2015 study in the American Journal of Medicine, in 2010 "US homicide rates were 7.0 times higher than in other high-income countries, driven by a gun homicide rate that was 25.2 times higher". Violent death is clearly a problem in the United States and unrestricted access to firearms only adds fuel to the fire.

One only needs to glance at social media to see why we have a gun problem in this country. The outrageous statements being made about gun rights in the aftermath of these recent mass murders have one strong and loud message, gun rights are more valued than human life. It is sickening.

The United States could take a page from New Zealand's Prime Minister, Jacinda Ardern. She had the backbone to call for and deliver tougher gun laws in 2019 after the mass killing of over 50 Muslim worshippers in Christ Church. New Zealand effectively banned military-style, semi-automatic weapons. This is in a country that had 49 gun-related deaths between 2008 to 2017. In an interview in 2019 with Christine Amanpour, Prime Minister Ardern was baffled by the United States' lack of response in changing gun laws after so many massacres were carried out with firearms. She said, "Australia experienced a massacre and changed their laws’, Ardern replied. ‘New Zealand had its experience and changed its laws. To be honest with you, I do not understand the United States".

Currently, Biden is taking backlash from stating that assault-style weapons and high-capacity magazines should be banned in light of these recent murders. As he stated, this is not a partisan issue. This is an American issue. Hopefully, our government will stop bowing down to the powerful and almighty gun lobbyists and finally do the right thing.

The right thing is to take action in the form of changing laws in this country. I encourage you to take the time, right now, to write Congress and your Representatives and tell them, no more. We can stand by, like the shepherd and the field hand in the painting, Landscape with the Fall of Icarus, but averting our eyes from the disaster is not going to make it stop.