by Patrick M. Ohana 8 months ago in opinion

From Palestine to Israel 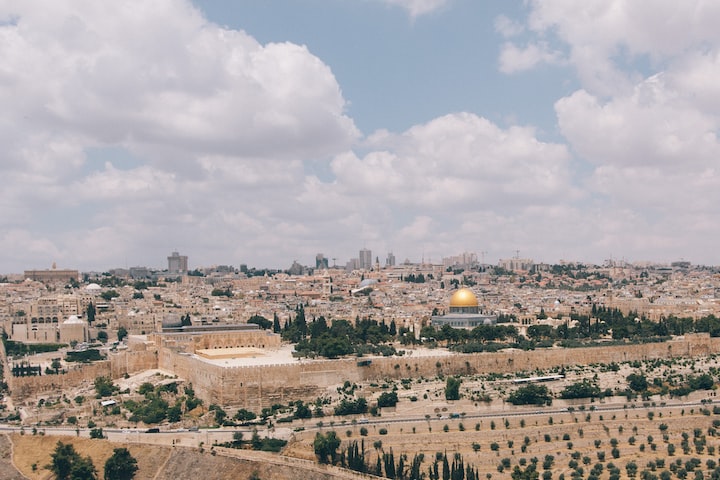 If the Right is somewhat wrong, the Extreme Right is extremely wrong. As for the Left, it is mostly dead, and the Extreme Left is extremely wrong as well. Almost everyone on the Left and a few on the Right are talking about shalom (peace), which is surely a halom (dream) when both sides — there is actually more than one side on each side — are refusing to play footsie, cooperating instead with their pricks. But a ménage à trois implicating two pricks, or even a single one, seldom ends with the satisfaction of all parties. The two-state solution has become a wet dream, and the one-state solution is a cul-de-sac. The relocation of one side may be the only way out of the swamp of violence. But which side?

The Jewish-Israeli Side - Part 1

The Jewish-Israeli side will not cede and cannot cede for several reasons. The Hebrews, the ancestors of the Jews, and the Jews after them, were in the so-called holy land before the Arabs, the Muslims, and the Palestinians. The Jews were dispersed by force and displaced by illusory choice, always promising themselves “Next year in Jerusalem” and reciting “If I forget thee, Jerusalem, let my right hand be forgotten!” There was always a certain population of Jews in the holy land, whether it was seized by the Christians, the Arabs, or the Muslims. Jews were killed and reviled around the world, requiring a sanctuary, a country to call their own. What other country could it have been if not Israel? The Kingdom of Israel, and the name of most of the scattered Hebrew tribes, was called Palestine from fifth century Ancient Greece. Even Zionists, who were mostly secular, thought of resettling in Israel. “If you will it, it is no dream, and if you do not will it, a dream it is and a dream it will remain,” declared Herzl. Jews around the world had been dreaming of an Israel for close to 2,000 years, albeit the Arab numerals and the Ancient Greece comma. Jews finally willed it, moving to Palestine throughout the centuries but especially in the 19th and 20th to escape the panoply of persecutions in Europe, and mostly later in Arab countries, purchasing Palestinian land, often swamped and malaria-stricken, and farming it, thriving against all odds, with help from diaspora Jews and a number of Good Samaritans. Everyone living in Palestine could have been called a Palestinian. Nonetheless, in 1948, when most Arab countries attacked the newly declared country of Israel, Muslim and Christian Arabs outside the UN-mandated lines were labeled Palestinians, while Jews with numerous Muslims and Christians in their midst were naturally identified as Israelis. Jews only have one country, and a small territory it is. Palestinians and Israelis. Israelis and Palestinians. What a travesty!

The Palestinian Side - Part 1

The Palestinian side will not concede but can concede for several reasons. The Palestinians are mostly Arab Muslims who live in the so-called holy land and in surrounding Arab countries, some of them also residing elsewhere in the world. Many Palestinians left or escaped Palestine following Israel’s 1948 War of Independence and 1967 Six-Day War, some of them keeping their house keys for the day on which they would return to claim their cottages back. The keys have corroded and most of the stone cabins have disappeared. Their “Next year in Palestine” is covered in blood, and their “If I forget you, Palestine, let my children become martyrs!” is forever fulfilled. There was a larger population of Muslims in the holy land since its capture by the Arabs, but Muslims could live in any Arab country and in any Muslim state. Some of them, however, called Palestine, the ancient Kingdom of Israel, home. Arabs and Muslims were, and are, mostly religious, and their holy city is Mecca, not Jerusalem, which is not even mentioned in the Koran. Their “If you dream it, it is Allah’s will, and if you do not dream it, a will it is and a will it will remain” echoes in crimson since 1948. Palestinians mostly will it with violence, teaching Judeopathy and attacking Israelis and Jews with stones, knives, so-called exploding sacrifices, and instead-of-food-mostly-home-made rockets and missiles. Living in Palestine throughout the centuries, they had nothing to escape from, save the decreasing crusades, that is until the exodus of surviving Jews from de-Nazified Europe, followed by other fugitives from Arab countries. Arab Muslim Palestinians even schemed and planned with the Nazis the extermination of the Jews in the holy land and Arab countries. Everyone living in Palestine could have been called a Palestinian, but in 1948, when most Arab countries attacked the newly declared country of Israel, Muslim and Christian Arabs outside the UN-concocted lines were labeled Palestinians, while Jews with numerous Muslims and Christians in their midst were rancorously classified as Israelis. Arabs and Muslims have many countries in large territories. Israelis and Palestinians. Palestinians and Israelis. What a distortion!

The so-called UN — Un-united Nations — and could-be-called VN — Veto Nations — is another farce, since five countries, namely the USA, Russia, China, the UK, and France, can veto any so-called UN resolution even if most other countries support it, which would have been a wise control measure against aggressive governments had these five veto powers promoted liberty, equality, and fraternity completely, unlike the French who professed these values but seldom followed them. When the UN voted in 1947 for the partition of Palestine into two, Arab and Jewish, states and a singular international administration of Jerusalem, the division was accepted by the Jewish representatives notwithstanding its limitations, but Arab leaders and their so-called governments rejected it, refusing to accede to any form of territorial split. The Arabs attacked Israel in 1948 and several wars and clashes ensued with no peace in sight over seven decades later. Sacrifices were offered on both sides, the Israelis turning too many of their sons and daughters into soldiers and corpses, and the Palestinians turning many of their civilians into murderers and martyrs.

The Jewish-Israeli Side - Part 2

Nevertheless, the Jewish-Israeli side is the only side that could desert its land, since its true expanse had not been physical for close to two millennia, spreading to an unrestricted mental dimension that could dominate any indefinite domain. A democratic referendum would be mandatory, involving all Jews around the world, with Jews defined as individuals who have at least one Jewish parent and who deem themselves to be Jewish, or any individuals who converted to Judaism, with the votes of Israeli Jews doubly added. Prior to this plebiscite, all Arab and Muslim countries that voted against Israel at the UN in 1947 and beyond — all ten countries did — and all other countries that voted correspondingly — three did — would be required to acquire Israel at a colossal cost, and provide Israeli Jews, along with any other Israelis who wanted to accompany them, with indubitably available arable land at least the size of up-to-date Israel, that is including Jerusalem, the so-called West Bank, and the Golan Heights, as well as assist in the relocation of the Western Wall and any other significant structures.

The Palestinian Side - Part 2

The UN, including the USA, Russia, China, the UK, and France, would accept the results of such a referendum, whether Jewish-Israeli or Palestinian (two referendums would be particularly improbable), and facilitate the monumental enterprise of the Jewish-Israelis or Palestinians. It is noteworthy that an initiative for a new Israel would be much more challenging given the need for a more than adequate area in a shrinking world. Only Australia, Canada, Russia, and the USA may contain potential areas for a new Israel. Most Jews, however, would probably exclude Russia for obvious historical reasons. Many Jews would potentially exclude Australia as well given its somewhat geographical remoteness and rather problematic situation with its Natives. Jews would have to choose between a section in Canada or a sector in the USA, providing that there is such a hospitable place. The project of a Palestinian state could be easily implemented in countries that already host Palestinians in refugee camps yet do not consider them to be citizens, namely Lebanon, Syria, and Jordan, with at least 30% of the latter’s population already being spot-on Palestinian.

Still, Israelis, who sing about peace with Palestinians, and aspire to a time of settlement, and Palestinians, who teach their children to hate Israelis, and aspire to shove them all into the sea, could simply consider a lasting territorial arrangement and peace, with religion off the table, under the table, buried in the past with all other ridiculous ideas and beliefs, which would set a precedent for the resolution of other conflicts around the world. Israelis and Palestinians, mostly Jews and mostly Muslims, paving the way to a better future. Judaism had advanced the blossoming (épanouissement) of Western humanity throughout its history, and Christianity followed suit staggeringly in the last few centuries. It is time for Islam to join the journey towards the true understanding of who we are, where we come from, and where we are headed. After all, both heaven and hell are what we make them to be.

Conversely, Israel’s refusal to forego its overseeing control of all morsels of land, all tidbits of territory, could set a different precedent for the resolution of other active and passive conflicts around the world. For example, North American and South American natives, Pacific Islanders and indigenous Australians could petition for the return of their transformed territories; Tibetans could ascend and descend the Himalayas for their ancestral land; Kurds could demand a country of their own; and Palestinians could adopt Israeli-like democratic and humane values similar to many of their people who live in Israel, or migrate, with satisfactory compensation, to a neighbouring Arab country, or somewhere perhaps more welcoming.

Medical writer who reads & writes fiction & some nonfiction, though the latter may appear at times like the former. https://patrick-m-ohana.anthi-and-m.com

Read next: Reason First: How Many Mass Murderers Are Black Males?