My Two Cents for the Bank

by Kellen Pifer about a year ago in opinion

A Centrist View of Politics 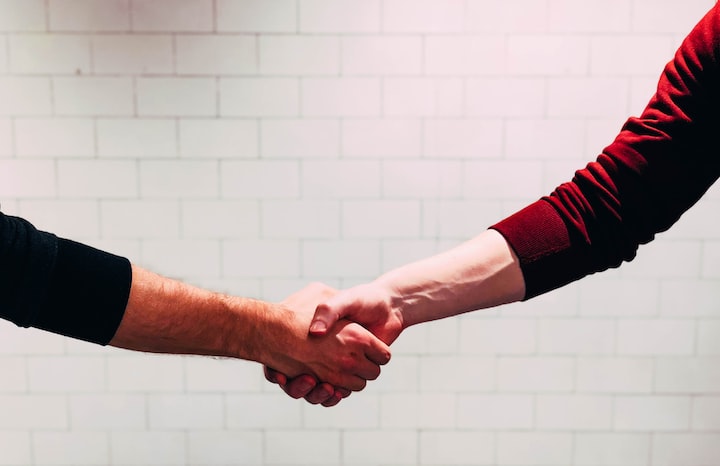 Political discussion was once a much smaller topic. Debated over water coolers at work and during ads of sports games, the topic was widely ignored by the vast public. Whether for the better or worse, it seems as if everyone is involved in politics in some way. This change was most apparent when a friend of mine started getting political on social media. Though it was mostly just memes he found funny, it was strange. This friend would openly sigh if anyone mentioned politics. Hell, he knew so little that I had to explain who Republicans and Democrats were so he could finish a project in high school.

For better or for worse, everyone is getting involved in politics. I would argue that, as long as it’s not forced, political participation is great. The more people that vote, the more voices that are heard and the government becomes more representative of the people. Sadly, though, I’ve seen misinformed or uninformed people on both sides. Everyone is shouting louder and louder and it seems like we aren’t getting through to each other. I see both sides. Though I generally lean to one side, I understand and listen to both and I generally see myself as a centrist. Centrism doesn’t mean I don’t have an opinion, and it doesn’t mean that I don’t care—it just means my opinions tend to fall in the center of the conversation.

So, what do I see? Most people don’t do their research. Everyone gets talking points from friends or family, social media or headlines of news sources. I call it “bumper sticker research” and it fuels hatred. Put simply, nuance can’t fit in a news headline or a bumper sticker and your friends and family will naturally tell you the story they heard—or the story they want you to hear. I often joke about how you can’t trust everything you hear online. When I was elementary, our class was given a list of resources to use for research. I had to bring attention to a source my teacher had given me to use because it proudly proclaimed that Columbus wrote a blog post on his laptop shortly after arriving home to tell his friends about his voyage—funny and good for storytelling, not for information.

So how do you combat misinformation? Don’t listen to fact checkers. This might sound counter-intuitive, but unless you read the entire fact check and understand it, you’ll be led astray often. For example, I read a fact check about something that happened—thinking that the site was unbiased. It openly said something was false, and their tweet advertising the fact check listed the fact and said it was false. I read the entire article and was surprised to find that the claim was true. At the end of the article, an extra claim had been thrown in. For example, the tweet would have said “Is the sky really blue? Fact check false!” and same as the title of the article. When you get to the end of the article, the end would have said something along the lines of “though the sky is visibly blue during the day, it is incorrect to say the sky is blue because it can be orange or red during sunsets and seemingly black at night.”

The fact checks aren’t always useful. Read the conclusion and ask yourself what the checkers are truly saying. In the fake example I gave, many people would read the headlines and told their friends and family that the sky isn’t blue. If asked, people usually say that they don’t really know but they just saw a verified fact check that it’s true. When looking for information, always take multiple resources from different places and try to ad variety to your sources. Don’t use all news media, don’t use only blog posts. The hardest part, try to get information from the opposite side from yourself. You should always grill your own beliefs harder than you would grill your opponent, it keeps your argument strong and it keeps you confident.

You are free to disagree with me, and if you would like to debate and discuss these topics, I am more than happy to discuss them. All I ask is that we throw a few things out. Don’t call names or throw titles and come in with the mindset you want me to have. If you are open minded and open for a true discussion, we may reach a stronger conclusion. If you come in with a closed mind and just want to duke it out for the sake of debate, neither of us are likely to change and doing that often leads to people being more cemented in their beliefs.

I believe the media is sensationalist. Some say evil, some say fair, I say neither. At the end of the day, people are chasing the bottom line. Truth takes a backseat to profit almost every time. I’m fine with sources being biased, I truly don’t care as long as they are upfront about it. I don’t really trust any news media; I fact check every single show I watch and I find holes in every single one. I use them as jumping off points, places to start my research, not end it.

I believe in civil rights and I am totally against racism of any kind. Do research on what you vote for, many things are hidden behind good titles. For example, there is a law in a state in the United States that would repeal the civil rights of the citizens. The proposition would simply allow the government to discriminate against its citizens based on race, gender, sexual orientation, etc. Go do some research and find it. Don’t listen to the name of the bill, read exactly what it does. It scares me that people want to be able to discriminate against you based on your race, I think it is wrong.

I believe in the individual over the group. I have friends from every category and title, every group there is and that doesn’t matter to me. Many people don’t understand this concept, they think one side hates groups and the other loves them—the opposite of love isn’t hate, though. It’s pure indifference. I personally don’t judge or disrespect anyone based on their race, sex or gender identity, sexual orientation, or anything else—I just don’t really care, I don’t think it is the most important part of you.

I believe in arguing from principles, not parties. I hate when people get stuck in a party and just repeat the talking points. It is not helpful; it is just divisive. Figure out why you believe what you do and start making decisions based on that. Personally, I believe that people are mostly able to govern themselves and there should be a safety net for those who can’t. I don’t believe that the government needs to ensure perfect equality—not because it wouldn’t be good, but because the government can’t ensure equality and that’s not the job of the government anyhow. I’m also religious and I let principles of forgiveness and understanding guide my words. I don’t believe in cutting people down for their differences and I’ve never told a person they are going to, or deserve to, go to hell.

Everyone will naturally have different principles and that’s perfectly okay. People make their principles based on their experiences, their economic or social situation, their friends and their families or lack thereof. Expecting someone to agree with you on everything is unrealistic and unfair—allow and accept differences of opinion, maybe other people have a point that you just don’t know or fully understand!

I am just one citizen. I’ve studied politics and history in college but that doesn’t make me any more qualified than anyone else to speak on these issues. Like I said, everyone has their own views on what works and what doesn’t. I listen to farmers on how to maintain crops but I wouldn’t ask a farmer for help with my computer. My views are just two cents in a bank, they’re two drops in the ocean. Nevertheless, I hope that this helped someone somehow!