by Muhammad Faheem 5 months ago in opinion 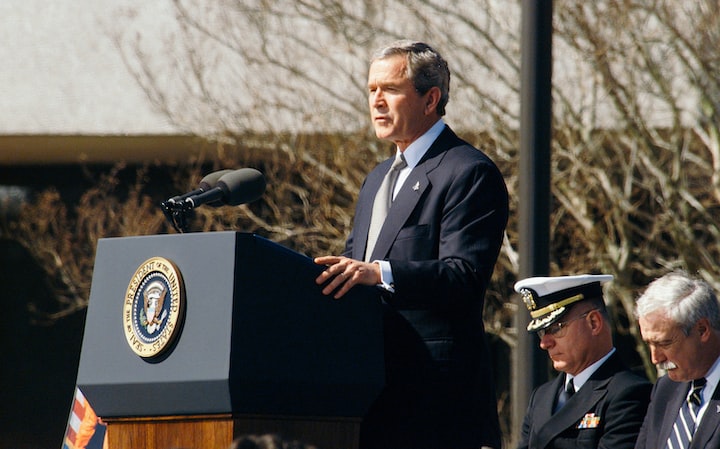 DETROIT — Privately, President George W. Bush is having a political panic attack as he retreats to his cocoon, seeking comfort from his nannies. Babs, his mommy, wife Laura, Condi Rice and Karen Hughes serve as his ladies in waiting, assuring our courageous leader that the boo-boos he gets on his head will get better and those bad boys criticizing his war are just meanies who don’t like him.

Vice President Dick Cheney, whose bum advice has cost him his male-nanny status, still is called upon for political valet duties. He made a pitiful attempt to quiet Iraq war critics and rewrite history. Cheney, the Lord of the Lies, still sticks to the bogus script he, more than anyone else, crafted: that Saddam Hussein was a dangerous threat to our security and war was the only way to save the republic.

On Capitol Hill, the Republican enablers in Congress shamelessly branded Democratic Rep. John P. Murtha, a decorated Vietnam combat veteran, as a “coward.” Murtha, one of the most respected members of Congress on military matters and until recently a staunch a supporter of the war in Iraq, had the temerity to call for a speedy withdrawal of U.S. troops.

The Pennsylvania congressman, a former Marine colonel and Bronze Star winner, twice wounded in Vietnam, said it is time to bring the troops back home. Murtha said the war is based on “flawed policy wrapped in illusion.” His unexpected defection caused the Republicans to panic, slur Murtha, and force a vote on a transparently disingenuous resolution calling for the immediate withdrawal of U.S. forces.

The Republican members of the House are trying to save face and their political hides as public support for the pre-emptive war is plummeting. They are getting their cues from the White House, which means they can’t even acknowledge the obvious truth that the Iraq threat was, at very least, wildly exaggerated to sell the war. If they had some smarts — they don’t — they would paint themselves as well-intentioned victims of the administration’s propagation of bogus intelligence.

You know the Busheviks are deep in desperation when they drag Cheney from his bunker to denounce critics who dare to say “the president of the United States or any member of this administration purposely misled the American people on prewar intelligence.” The intelligence was cooked and the only way that could be done was with purpose and premeditation. Only blind partisans and fools argue otherwise.

Cheney made his denunciation wearing a tuxedo at a dinner for rich Republicans as the children of people of more modest means die in Iraq in a contrived war, doomed from its inception. Violence explodes every day in Iraq because our troops are seen as invaders and oppressors. Bush’s horrible experiment in using military aggression to “spread democracy” is an irredeemable foreign policy disaster that has done immeasurable damage to our national security.

Cheney tried to stem the growing chorus of criticism for the lies he fashioned, scowling that those who expose the deceptions are “irresponsible,” “dishonest” and “reprehensible.” He used that threadbare argument that criticism in the middle of a war “harms the troops who hear these cynical and pernicious falsehoods day in and day out.”

Cheney said he was proud of the men and women fighting the “war on terror in Iraq,” and lamented “a few opportunists are suggesting that they were sent into battle for a lie.” They were. The “terror in Iraq” is the direct result of the invasion and occupation. Murtha recognizes a fundamental truth that sends the Busheviks reeling: that the continued presence of U.S. troops is “inciting the enemy against us,” and the only hope to quell the violence is to get them home as quickly as possible.

The more indignant and solemn Cheney sounds, the more outlandish and transparent his lies. He has no soul, shame or conscience. He and his dauphin in the Oval Office are desperate, angry and vindictive. “If we screwed up,” they whine, “so did everyone else.” They are so addicted to their reckless irresponsibility and supreme arrogance they are incapable of ever recognizing and soberly reflecting on the manifest failures they’ve created.

Now that six out of 10 Americans have concluded they lied to get the war they wanted, Bush and Cheney are scrambling to collectivize their failures and tell those who are now seeing and speaking the truth that their actions will harm the troops and the war effort.

“We will stay in the fight until we have achieved the victory that our brave troops have fought for,” Bush bellowed last Saturday to cheering American military personnel at Osan Air Base, near Seoul, South Korea. Aside from the company of his nanny corps and at the coffee shop in Crawford, Texas, military bases are the only places Bush can feel appreciated these days.

He loves to don a faux flight jacket, get into his military mode, salute the troops and hear the adulation from the crowd. There’s our commander in chief. He’ll lead us to victory.

By the way, what is victory in Iraq? Disarmament? Regime change? Capture and try Saddam Hussein? Freedom and stability for Iraq? Create a viable democracy? Hold elections? Bring peace to the Middle East? Protect Israel? Defeat al-Qaeda? Build military bases? Protect the oil fields? Win the mid-term congressional elections? Victory is all, any or some of the above. It depends on the Bushevik talking points of the week.

These last couple of weeks have been grueling for Bush. He’s been on the road to Latin American and Asia, and our leader hates to travel. He has to eat all that “fur’n” food, listen to “fur’n” languages, stay up past his 8 p.m. bedtime and pretend he’s interested.

In Korea, tens of thousands of demonstrators took to the streets to protest Bush and his war. The totalitarian Chinese government doesn’t permit such public displays, but the Chinese people are dead-set against the American aggression in Iraq.

In fact, everywhere on the planet, save among a dwindling number of Americans and the Bushevik cheerleaders in Congress, people are opposed to the war in Iraq and want a speedy U.S. withdrawal.

We lost any remote hope of pacifying Iraq when the horrors of the torture of detainees at Abu Ghraib prison were revealed. The torture policies forever alienated the Iraqi people, and assured popular support for Islamist extremists and insurgents and their violent campaigns.

Now, we learn Iraq’s new police force has been systematically torturing prisoners and even carrying out non-judicial executions. The brutality occurred right under the noses of American military commanders. British reports describe the Shiite-dominated police using torture on captured Sunnis, further inflaming the sectarian violence unleashed after the U.S. invasion.

ABC News reports two former Iraqi detainees were repeatedly tortured by U.S. forces trying to squeeze out information about Saddam and his nonexistent weapons of mass destruction. This new revelation comes as Bush and Cheney continue to resist a Senate defense spending authorization that includes a no-torture provision.

Adding to the Iraqi resistance and international outrage over U.S. behavior, the Pentagon admits, after repeatedly denying it, that white phosphorus was used as a weapon during the U.S. assault on Fallujah, the insurgent stronghold, in the summer of 2004.

RAI, the Italian television network, recently produced a disturbing documentary, “The Hidden Massacre,” the story of the use of the chemical weapon on the people of Fallujah.

The video of the corpses burned to the bone and eyewitness accounts of the suffering are difficult to see and hear. First denying the reports of the use of white phosphorus, Condoleezza Rice’s State Department then admitted the chemical had been used in artillery shells over Fallujah for “illumination purposes.”

But in the face of the documented evidence of civilian casualties, a Pentagon spokesman, Lt. Col. Barry Venable, finally admitted, “It was used as an incendiary against enemy combatants.” Venable told the BBC that earlier statements were based on “poor information.” I’ll say.

Among the changing reasons for the war, Bush, Cheney and Rice repeatedly warned us that Saddam had chemical and biological weapons and someday he would use them on another nation or provide them to terrorists. Rice loved to remind us Saddam had used chemicals on “his own people.”

Fallujah has been pretty much destroyed, its 300,000 residents displaced and in despair. The bodies of many of their loved ones are charred beyond recognition with chemical weapons. These people want us to leave their country.

Copied with permission from: http://plrplr.com/44101/murtha-right-bush-lies/