From One Human to Another

by Dan Pittman 3 months ago in opinion

A letter to Mr. Trump and the American people 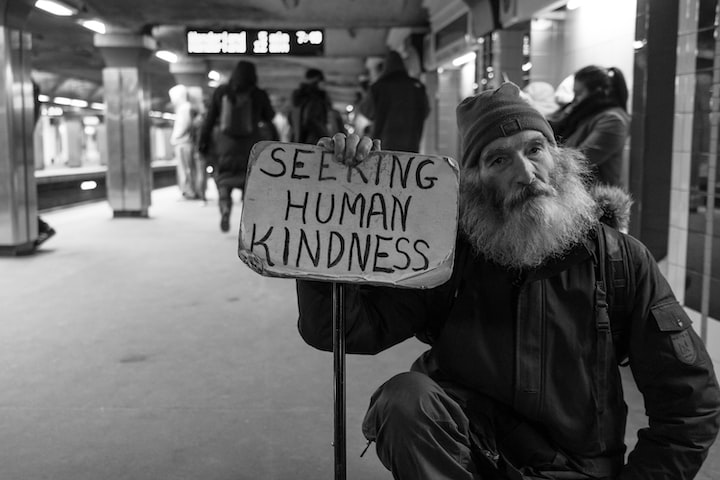 Photo by Matt Collamer on Unsplash

I suspect the majority of letters ceremoniously addressed to Donald Trump will be chest-thumping, out-the-door-pointing, good-riddance-wishing vent sessions. And hey, I get it. It truly has been a wild four years.

However, I believe there is neither merit nor worth in participating in divisive action toward someone or something regarded as divisive. Although I can, on some level, sympathize with those who take this route, I will opt for a different one.

I have spent my entire life caught in the middle. Neither the conservative nor the democratic party have struck me as forces endeavoring to establish sustainable inertia in the direction of true unified progress. Therefore, my perspective is that of a disaffected centrist, based on the traditional scale, not one that fluctuates with extremist movements like that of a grading curve.

I am writing this from the perspective of a compassionate man. To have compassion is to walk with humility and to seek out understanding from every situation, regardless of what my personal opinions may be. I am taking the difficult route, which is to dissect and disseminate mounds of information and opinions gathered over four years and introduce them to my own biases.

This process involves methodology comparable to the scientific method, in that my hypotheses must be tested despite my own wishes for it to be proven true or false.

Mr. Trump, you walked into a position presiding over a country that ceased taking responsibility for their own actions and that which rewarded pushes for division. You faced a sea of political officials dead set on bringing you down. This is tough for anyone in that position, regardless of whether or not it is deserving. Although you may not have walked the walk of an ideal leader, any individual with your political representation, no matter how eloquent and capable, would have been lambasted to no end.

I do not ask others to regret how they treated you, Mr. Trump. Nor do I argue that a portion of their anger was unjustified. Anger often arises when one does not feel heard, and you certainly played your fair part in selectively plugging your ears.

At the very least, your time as president has lifted the veil on the corruption and money-hungry nature of the united states government, as well as the amount of time, energy, and money devoted to making the american people believe that this is not the case.

Now, it’s likely at this point many readers are attempting to categorically place me along the spectrum of “right” and “left” despite my table setting, but I encourage you to withhold this urge. It has become far too commonplace to cast the stone of judgment prior to completing observations, which leaves far too much space for regret and missed opportunities.

A monstrous issue the majority of the country has faced (specifically those who call themselves republicans, libertarians, centrists, apolitical, or independent) is the onslaught of convoluted and narrative-driven media coverage. The approach of mainstream media has been entirely algorithmic (by design), so getting our hands on objective data has been, and still is, effectively impossible.

A large portion of journalists appear to have abandoned their role by definition. Instead, they have allowed their own personal opinions and emotions to dictate the direction of stories the public relies upon to be as objective as possible.

Division boosts ratings, and we the people are equally at fault for feeding this system by continuing to tune in on the stories of doom. This display of a lack of humanity and perpetual division-seeking has also brought to life a metastasizing tumor in our society known as cancel-culture.

How can those that think differently than what the current narrative dictates feel like their voices are heard when cancel-culture seeks to shut down voices of dissent?

The surest sign of a lack of humanity is the denial of a fellow human to weigh in on human affairs.

Herein lies a key issue: the public has not been given ample opportunity to apply a proper methodology, because the information we are fed is interwoven with a narrative. The narrative behaves as a catalyst - speeding up our own thought processes by effectively skipping said thought processes.

How can we rely on our own opinions if they are formed for us? To change another’s mind that is interwoven with a strong and persistent narrative is like trying to cut chain-link with Crayola scissors.

Recently I wrote a piece discussing the importance of updating your mental maps according to the ever-changing landscape.

“Mental maps are the surrounding environment in the form of synaptic connections. Our brains acquire information about our environment and create a model for us to reference and relate to. For example, you can likely visualize your route to and from school where you grew up, or your current route to your local coffee shop. Our brains map this out for us so we can operate at a certain level of automaticity, leaving energy for various other cognitive functions. Your brain is like water in a way - it’s going to seek out the path of least resistance."

In short, the reason this is so important is if we do not update our maps of the world, we can easily become lost as our environment changes.

What the media has done is a continual update of our mental maps for us that does not actually match reality. We feel like we are staying up to date by tuning in to the nightly news, yet we are appalled by the level of division that is felt across the country. Have you ever considered the possibility that we are not as divided as the media tells us we are?

In a way it may feel as though this is moreso a letter addressing mainstream media than Donald Trump. Here’s the thing: The vast majority of people have formed their opinions of Trump by virtue of what the media has told them. It’s nearly impossible not to feel hatred for Donald Trump if you have been tuned in to any mainstream media outlet for four years straight. Now, are your opinions of this man truly yours? Or were they made for you?

Accountability Outsourcing and a Broken System

It is not simply a lack of individual accountability, but in our entire system. Stepping back and gaining perspective reveals the obvious nature of the game. No argument can be made that our government is truly seeking out what is in the best interest of the american people.

Humility is not a quality represented by those appointed to represent us, from the top position of Commander in Chief all the way down the line to city council. Nobody is held accountable, and the American people are the ones that suffer. This level of hypocrisy is a key component in the level of public distrust in our government.

As I close out this letter, I am calling on every individual who has taken the time to read this, including you, Mr. Trump, to do three things:

1) Take responsibility for your own actions and stop pointing fingers.

2) Think for yourself. Do not let anyone shape your opinions for you.

3) Treat every single person you meet with compassion.