by Nicholas Bishop 26 days ago in controversies
Report Story

Partygate Will Not Leave Boris Alone. 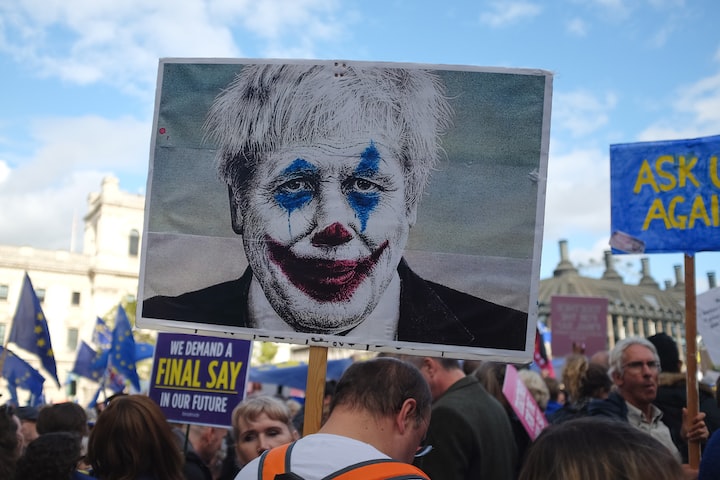 Boris must wish he had taken Indian citizenship as he flew back into the UK. Partygate will not leave the Prime Minister alone as MPs voted through a motion to investigate Boris. Labour instituted this motion to investigate the Prime Minister's antics. Also, the Metropolitan Police have issued more fines to 10 Downing Street over illegal lockdown parties. Boris and his troubled Chancellor Rishi Sunak could be the recipiants of these fines. Other cabinet members will also be receiving fines and Downing Street staff.

Boris whilst holding a joint press conference with Indian Prime Minister Mohendra Modi expected to be in his job in 6 months time. Every time Boris is asked about partygate he bats away the questions. Preferring to speak about Ukraine or some other issue. Is Boris in denial? Or as far as he is concerned he has apologised to parliament and that's that. However, Boris must know in his heart of hearts that he is a lot of trouble. If Boris knowingly misled parliament it could have serious consequences.

Since the Ukraine war partygate went quiet and Boris seemed to be out of trouble. Partygate once more has come around like a caroussel and bitten Boris on the backside.

A growing number of backbench Tory MPs are not happy with Boris' shenanigans. One unamed senior Conservative said its time to move against the Prime Minister and oust him. A prominent backbencher Steve Baker agreed saying the Prime Minister "should be long gone". William Wragg MP agreed with his colleagues assessment of the situation.

It will be the local English elections soon and how will this situation affect Tory votes? Of course, there will be die hard Boris supporters equally there will be those of the opposite opinion. If the Tories are thrashed in these elections this will add to Boris' and the govertnments woes.

Of course, Boris will want to trumpet the trade deal he struck with India. Mr Johnson will say it is proof of post Brexit Britain and that there is life beyond the EU.

In Ukraine Boris is very popular because he has supplied training and weapons. President Vlodimir Zelensky and the Prime Minister seem to have a good working relationship. Love or loathe Boris, Ukraine sees the Prime Minister as its saviour right now.

During the harshest time of COVID and lockdown Boris thought his Churchill moment had come. The stoicism shown by the NHS and others was compared to the blitz spirit of WWII. At the time, there was a blitz spirit and an attitude to resist COVID. If anyone knows Boris' history he has a fascination with Winston Churchill. The Prime Minister took time out to write a book on his hero still available.

Now the Ukraine conflict is raging Boris once again has taken up the Winston mantle. Many in the UK will see Boris as being a good supporter of the Ukrainian war effort. Others will never forgive Boris as he partied and they could not.

Boris is known as the 'Teflon' Prime Minister. Things just don't stick to him and he carries on regardless. However, this time could be different and we could see Boris booted out.