An Alternate View of Democracy

While democracy has its critics, the arguments in its favor remain valid 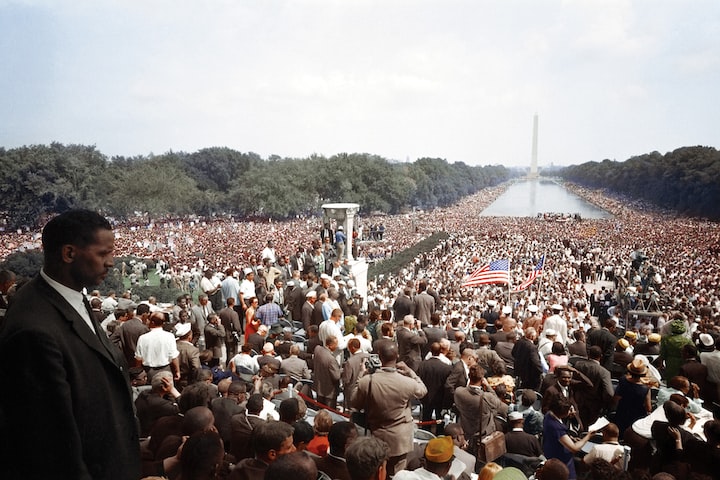 Democracy as a political ideal has nothing to recommend it. Pure democracy is simply majority rule. It is devoid of any moral principle. If the majority wants it, anything goes.

Perhaps the most devastating indictment of democracy is that offered by the Japanese anime series, Kino's Journey. Originally published as a series of "light novels", that is novels aimed at high school and middle school students, it was later turned into a animated video series.

Kino's Journey is sort of a latter day Gulliver's Travels. Kino, a self-sufficient young woman armed to the teeth with guns and knives, travels around with her talking motorcycle Hermes visiting many strange and unusual places, each with a unique and often bizarre culture. Some are technologically advanced and some are backwards. Like Gulliver's Travels, these encounters teach us something about the human condition and human foibles.

Episode 5, Three Men Along the Rails, has Kino and Hermes arrive at a city that seems to be completely desolate and abandoned. You can watch the five minute video below or just go ahead and continue reading. (It's worth watching.)

After three days without finding a soul - nothing but a massive graveyard and a broken statue in a courtyard reminiscent of Ozymandias, a stranger emerges, contrite yet adamant - "What we did was necessary," he says. "Don't you see?" Kino asks him to explain what he means and the stranger tells his story.

He relates that ten years ago the country had been ruled by an absolute monarch, a tyrant who ruined the economy and executed any and all opposition to his rule. The people revolted and overthrew the tyrant and formed a new government. They decided that everyone should have a say. They opted for majority rule so everyone could be in charge.

Their first decision was to execute the king. Everything went okay for a while, but they spent way too much time standing around to vote on every issue, so a faction proposed they choose a leader to make decisions for them. The majority opposed this. It could prove dangerous.Who would control the leader if he ran wild? Such nay-saying was declared treasonous and an impediment to progress by the majority. The dissenters were put to death. When a group arose to oppose the death penalty, they too were executed.

"Eventually," the man tells Kino, "anyone and everyone opposed to the majority was put down."

It was a year ago that they had their last execution. Only three people remained in the country, the man, his wife, and one of the original revolutionaries who insisted on leaving. He and his wife opposed it. The revolutionary was executed.

The story reminds me of the famous woodcut from the French Revolution, a satirical cartoon showing Robespierre guillotining the executioner after everyone else in France has been executed.

Continuing with our story, the man relates how his wife died six months ago and he is the last survivor. Kino and Hermes decide to go but the man draws a pistol and pleads with them to stay and rebuild the country.

Kino replies, "I move that anyone threatening another person with a fire arm be eligible for the death penalty." She and Hermes vote in favour. The man lowers his weapon and our duo drive off. As they drive away, a gun shot rings out. The last man has executed himself.

This, of course, is a fictional parable, but its lesson rings true. Pure democracy is simply majority rule. It knows of no morality except what the majority decides. It can, if it chooses, elect a Hitler to rule them, which is exactly how Hitler came to power.

Ayn Rand wrote, "If we discard morality and substitute for it the Collectivist doctrine of unlimited majority rule, if we accept the idea that a majority may do anything it pleases, and that anything done by a majority is right because it’s done by a majority (this being the only standard of right and wrong)—how are men to apply this in practice to their actual lives? Who is the majority? In relation to each particular man, all other men are potential members of that majority which may destroy him at its pleasure at any moment. Then each man and all men become enemies; each has to fear and suspect all; each must try to rob and murder first, before he is robbed and murdered."

But there is another way to look at the concept of democracy.

The whole problem of politics, Karl Popper argues in The Open Society and Its Enemies, is based on a false question - who should rule? Plato answered that the wisest should rule. But others have postulated the General Will (Rousseau), the Master Race (Hitler) and the People (Marx). The question is "quite useless" and should be replaced by a new question, a question based on the idea that we should "prepare for the worst rulers and hope for the best." That question is, "How can we so organize political institutions that bad or incompetent rulers can be prevented from doing too much damage?" (Italics in the original - page 121 of Vol. 1).

As Popper notes, "It appears to me madness to base all our political efforts upon the faint hope that we shall be successful in obtaining excellent, or even competent, rulers."

An answer to Popper's question instituted by the founders of the American Republic is a constitution designed with a declaration of powers retained by the people beyond the legitimate scope of government (the Bill of Rights) and a government controlled by checks and balances.

Of course, anarchists argue against the very notion of political power at all. But governments in today's world are a given. It would take a cultural revolution of unprecedented scope to have an anarchist society emerge.

How we would transition from a governed society to an anarchist society is fraught with difficulties. I have argued previously that such a society can only emerge through evolution, not by revolution. But it is a slow process that will not come to fruition in my lifetime and perhaps not for several hundred or even a thousand years.

Which means that we must, more or less, cope with our governments as we find them. And, as Popper says, we must work to prevent bad or incompetent rulers from doing too much damage.

Popper goes on to note that there are two different kinds of government in the world. "The first type consists of governments of which we can get rid without bloodshed - for example, by way of general elections; that is to say, the social institutions provide means by which the rulers may be dismissed by the ruled, and the social traditions ensure that these institutions will not easily be destroyed by those who are in power. The second type consists of governments which the ruled cannot get rid of except by way of a successful revolution - that is to say, in most cases, not at all."

And here is where we come to the term "democracy" as it is commonly held in the western world.

"I suggest the term 'democracy' as a short-hand label for a government of the first type," says Popper, "and the term 'tyranny' or 'dictatorship' for the second. This I believe, corresponds closely to traditional usage."

But he does maintain the conviction that "the acceptance of even a bad policy in a democracy (as long as we can work for peaceful change) is preferable to the submission to a tyranny, however wise or benevolent."

This principle cannot be gainsaid. Ludwig von Mises, in his book Liberalism: A Socio-Economic Exposition, notes that democratic government ultimately rests on the consent of the governed. "In the long run no government can maintain itself in power if it does not have public opinion behind it, i.e. if those governed are not convinced that the government is good. The force to which the government resorts in order to make refractory spirits compliant can be successfully applied only as long as the majority does not stand solidly in opposition."

Mises goes on to say, anticipating Popper's later work, "Democracy is that form of political constitution which makes possible the adaptation of the government to the wishes of the governed without violent struggles. If in a democratic state the government is no longer being conducted as the majority of the population would have it, no civil war is necessary to put into office those who are willing to work to suit the majority. By means of elections and parliamentary arrangements, the change of government is executed smoothly and without friction, violence or bloodshed."

And here is where I see an alternate view of democracy. Democracy is not an end to strive for. Democratic governments often engage in bad policy, destructive economic policy, and even an overbearing suppression of what libertarians see as basic human rights.

What democracy is, as defined by Popper and Mises, is a means to an end. It is a methodology for peaceful, non-violent change in society.

Pure democracy is neither good nor evil. It is as good as the will of the majority. But democracy construed as Popper puts it, as a government with built-in checks and balances that we can get rid of without bloodshed or violent revolution, is not an end in itself, but a means to an end. A means to peaceful change.

Since libertarianism is based on the principle of non-violence, peaceful change is to be preferred to violent revolution and bloodshed.

Looking at democracy as a means and not an end means that we must focus on cultural change, on influencing governments where we can to adopt policies that recognize individual rights and the value of individual liberty.

The battlefield is an intellectual one, academe and think tanks, where libertarian economists and philosophers can argue for reason and individual liberty. And even public forums where freedom lovers can express their ideas with an eye to influencing others. Success in this relies on being a clear thinker and an effective communicator.

For all its flaws and foibles, most western democracies fit into this tradition - a tradition of seeking peaceful change through ballots not bullets.

As Winston Churchill put it in the British House of Commons on Remembrance Day 1947, "Many forms of Government have been tried, and will be tried in this world of sin and woe. No one pretends that democracy is perfect or all-wise. Indeed it has been said that democracy is the worst form of Government except for all those other forms that have been tried from time to time."

This essay was previously published on my politic/philosophical blog The Jolly Libertarian.