by A A 2 years ago in blockchain

New technologies are continuously being integrated into our lives – of which Bitcoin (renowned virtual currency) is one of the most thriving. Undoubtedly, Bitcoin’s value has burgeoned (from $0.07 in 2010 to $1,000 in January 2017). Nevertheless, the real breakthrough, invented by unidentified Satoshi Nakamoto, remains the DNA underpinning this cryptocurrency; the blockchain.

Computing gurus have envisioned 2017 as the year where blockchain technology will move towards mainstream application. Some have even heralded it the "second-generation" internet, with several business models in one; market creator, community, and service provider. Blockchain originates from Google Doc and ERP principles (central data repositories) but takes these to an entire novel level. Essentially, blockchain technology serves as a decentralised, synchronised, and distributed peer-to-peer ledger (DLT) which eliminates the need for the "middle man." Put simply, blockchain is purely an evolving database which updates participants in real-time and stores information in blocks. Each block is computer code containing data (e.g. transactions). Once validated, it is then securely chained to the preceding block via a digital signature.

How a Blockchain Works 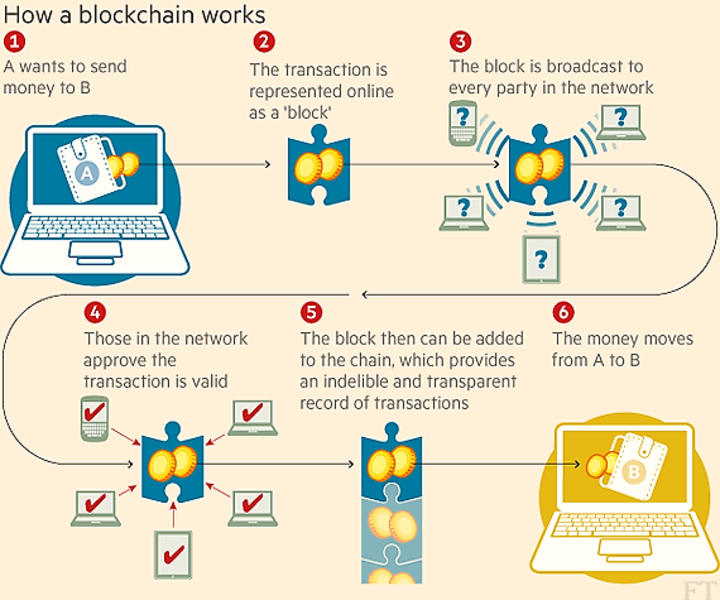 Yet above all, blockchain employs sophisticated safety algorithms meaning securer structures where hacking is extremely difficult. Thus implementing blockchain has potential to reduce both risks and costs for users.

PricewaterhouseCoopers forecasts that these blockchain benefits will drive the momentum towards widely digitalised and self-executed transactions by the 2020s. However, this mechanism has the capacity to diversify far beyond this and transform other major markets/industries.

Blockchain can prove useful in any situation where IT systems are required to communicate and share information with one another e.g. the financial sector. In fact, Morgan Stanley’s report expects financial institutions to spend above $1 billion on FinTech-based blockchain projects in 2017 alone. Some are even developing personalised private blockchains which are customisable to each user group, thus increasing job optimisation. So, blockchain can reform financial services by empowering banks to improve their existing old-fashioned model and decrease their non-value activities. Making them more productive, automated, and even rescuing their current untrustworthy image.

Yet the financial industry is merely the tip of the iceberg and only one of the blockchain’s possible applications—improve the tracking of goods and people, tackling music piracy by allowing artists to track their singles/album action, enable honest electronic voting (no double voting), better healthcare (efficient and safe platform to store records and patient-doctor dialogue), etc. Hence blockchain can give rise to a whole new cohort of business opportunities. Enthusiasts even believe blockchain can disrupt the disruptors (Uber, Airbnb etc.) by reshuffling their users’ experiences. Clearly, this advancement represents a prospect for all enterprises to utilise a modern solution to solve their old problems and therefore gain competitive advantages.

Conversely, it is rather naïve to assume blockchain will effortlessly embed into our existing networks and immediately present these advantages. Instead, blockchain integration may take years (beyond 2017), since the correct infrastructure must first be in position to facilitate the blockchain, thus calling for a complete re-engineering of foundational business processes. Evidently, blockchain is a game-changer, but it is undeniable that implementation will cost millions. Without the necessary investment to build the radically transparent infrastructure, managers will never be able to reap the rewards. This time-scale is exacerbated for larger organisations who may wish to construct huge systems to support their complexity. Moreover, blockchain has only ever stood proven with bitcoin. So it represents an expensive risk, not to mention the sheer effort managers need to plough into organisational learning.

Regulators also persist to be a hindrance to the extensive acceptance of blockchain. Notoriously, governments generally take a skeptical approach with new innovations and protect their authority through market regulation and many other procedures. Nonetheless for this technology to flourish, blockchain requires every party in the system to adopt it; which is going to be a challenge. In addition, with blockchain essentially triggering job losses for those working in back-of-office roles and as middle companies, it is common for governments to be rather apprehensive.

Despite being in its infancy, the emerging blockchain ecosystem is very likely to stay for the long-run. Definitely blockchain can have an immense impact in a wide range of plausible settings. But before witnessing any fruitful gains, the main barriers must foremost be tackled. Managers need to utilise their time intelligently and begin investing in the infrastructure and organisational learning to provide the firm with the groundwork for the blockchain to emit advantages. Correspondingly, regulators need to shift their mindset and begin embracing the revolutionary potential of blockchain technology. Only then will the blockchain trajectory resemble a profitable one with benefits enjoyed for years to come.

blockchain
A A
Read next: Best Performing Crypto Coins to Buy in 2018
A A
I am a secret writer (writing under the pseudonym AA). I love to write about a range of topics: business, technology, life hacks, cooking etc. If you enjoy my work please support me. Thank you very much.
See all posts by A A →