The Grip of a Corset 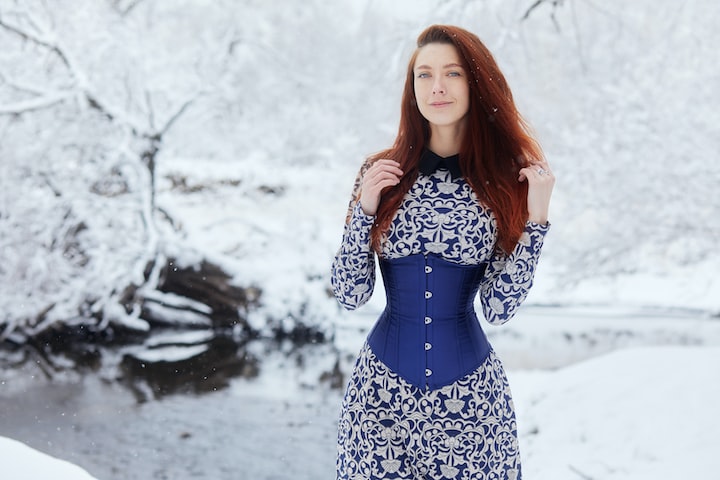 I swear that I should have been born in an era where wearing a corset was the standard. I mean, outside of the disease, lice or the fact that there was no running water or modern toilets for most of those eras, the corset is extremely appealing to me. I am a fool for the historical theme shows like The Tutors and Reign. I also love flicks from time periods that have the corset style costumes like Game of Thrones and Bridgerton. The way Angelina Jolie looked in the movie Original Sin… absolutely loved her dresses!

I was originally draw to the corset when I went to see the movie Titanic when I was 14. The curves of the corset. The immediate breast lift. Being a lady that has large breasts, the fact that I could wear a top without a bra, piqued my curiosity. There’s no slouching in a corset either. The bones (Bones are what shapes the corset. The material the bones are made out of is dependent on the time period. Not all bone material is equal!) that shaped the corset, allured me. The strength and power a woman demanded while wearing a corset, was something I have always admired. During past time periods, corsets and dresses were how women expressed themselves. The colors, fabrics and exaggerations of their natural body is how they would differ from other women.

The first time I purchased a corset I was in my late teens. I found one at a thrift store when I was looking for a bookcase. I know, I know, but I got sidetracked. Squirrel brain! I bought this small masterpiece for seven dollars. It was dark blue with little off-white flowers embroidered into it. Excitement coursed through me. I was not aware that corsets were available to buy. Like, WHAT? I need you to realize this was before google. I had a flip phone. You can google flip phone if you aren’t sure what that is! I got home, washed it very carefully, not knowing how to care for a corset, I didn’t want to ruin it. Lightly scrubbing the flowers with Oxy-Clean and wiping the satin fabric with my fingers under running water with a little bit of soap for about an hour, I rinsed the cleaners out of the delicate fabric and then I hung it to dry.

When I got home from work the night after, it was like new. Out of anticipation, my normally long relaxing shower only took about 10 minutes. I dried off and tried my corset on. This corset was not one that laced up in the back. It clipped all the way up the front. I remember sucking in my breathe and holding it while I fastened each clip. It was a struggle to say the least. It took me a solid half an hour to fasten each clasp. I had a moment where I almost gave up. But I sat down and focused on the task at hand. I stood in the mirror, asking for guidance and succeeded. Unfortunately, the corset was a size or two too small and pinched my hips. My nipples were barely covered and the brim at the bottom was folding up. I got it on though!!!

Although it did not fit me like the ones in the movies fit the women, the way it felt on me, was exhilarating. I felt like I had missed out on a secret dress code. At the time, no one I knew had this corset. I had always worn clothing that was considered tomboyish. I felt like a different person with this on. I turned left and right, and around a few times, reviewing my accentuated curves. The pressure on my stomach felt good. I know it sounds uncomfortable, but I loved it. My back was forced straight and I didn’t need a bra; that was the best part for me. I imagined how I would look if the corset fit properly. I had a new mission. I needed to find a corset that fit. I HAD to find one!

With online shopping being almost nonexistent at the time, I would go to a store with lingerie and I would ask if they had corsets. Finally, after two malls, I found a store that had corsets in stock and I could try on before I purchased them. In my mind, I hit the jackpot. My friend and I picked out one of almost every style that the store had in stock. I think there were three styles that had a few different colors for each. The icing on the cake was the fact that I could get them custom made with the style and color I wanted, if I was willing to wait a couple weeks and pay a bit more.

Many corsets in hand, we went into the dressing room. Needing her help to lace some of them up in the back, I sucked in and she tightened. Getting pinched here and there or not being able to breathe once or twice, trying on the corsets became an entire event. A hilarious one at that. For a little visualization, I am 4’ 11’’, about 125/135 lbs., 30 DDD/F bust, with a very short torso. I am naturally curvy with a little tummy. So, trying on corsets that were made for tall skinny models with legs as long as my body… it was like shoving marbles into each end of a straw. Although the corsets were clasps and laced, they were NOT made for my curves. One of the corsets was so long on me, that I literally was able to move like a robot. I busted a few moves in that corset. So happy recording videos with your phone wasn’t really a thing back then. Having hip-long hair and no hair tie, was also a complication that almost left me bald. The mirror and I had a few intimate moments and it helped me with my balanced more times than I can actually recall. After all the grunting, laughter, and mild pain, I decided on one that was almost perfect. Almost! At the cash register, I ordered two others that would be more for my body type. They would be shipped to my house in about a week or so. Paying for the one I decided on and two that hopefully would be perfect, we left with the memory of a two-hour dressing room extravaganza…

I came home one night when I worked almost 18 hours and was absolutely exhausted, but there lay a package with my name and address on it, in the common area of my apartment building. Having been absent-minded, I had forgotten that I was waiting on the corsets. I opened the box in the privacy of my room and immediately regained life. These two corsets fit perfectly. No pinching. No boob spillage. No extra long hip restrictions. I was in love with these two corsets. Finally, I found what I was looking for.

Now I had to figure out when I was going to wear them. At the time I was heavily involved in the dance scene in my city. Although these corsets fit perfectly, they didn’t allow me to move my body as needed for dancing. I decided to wear them on occasions out on the town like New Years Eve, Halloween, Birthdays, etc.

At first, I was somewhat self-conscious about wearing them in public because I knew no one else was wearing them and that people already seen me and my style. Like I said, I was known for dancing at the night clubs and dancehalls at the time. Good thing I had a lot of self-confidence because I didn’t let my subconscious stop me from enjoying my corsets in public. The first time I wore one out was on New Years Eve and I was stopped so many times, people asking me, “What is that?” “Where’d you find that?” I received compliments such as, “That is so pretty!” “That looks amazing on you!” “I didn’t realize that was you. I’m so used to seeing you in…”

I was happy for all the positive feedback, but I will admit the added attention unnerved me. I didn’t mind attention while I was dancing because that was my saving grace. Dancing freed a part of me that I needed to express. Corsets forced me to confront a deeper issue of insecurity of not allowing myself to change. I was allowed to change. I was allowed to evolve. I did not have to be only known as this person or that person, but I was allowed to have different faces; wear different hats per say. It was okay. I was going to be okay if I changed. In fact, I was expected to change with age and with experiences. Corsets gave me that confidence to be more than just “that girl who…” I recognized that sensuality as a young woman was something I needed and was happy to invite into my life. Corsets allowed me that freedom.

The first time I seen a corset at a clothing store, I was so mad. All those years I had to go searching and have them made. Now this new generation was able to have them as the newest renewed fashion statement, available without having to work to find one like I had to. When I purchased one of these new mass-produced corsets, it was nowhere near as strong as the ones I had. The bones bent after a few wears, the fabric tore easily and they seemed more like a single use or two wears at the most. Most of my corsets, I had for years and worn multiple times. Now that everyone started “waste-training” and wearing corsets again, I often get asked where I find my corsets. I tell them to look online because I’m not giving out my source/s. Yeah, I know, petty but whatevs!

Now a days, I work so much and type so often, I hardly get to show off my beloved corsets. And of course, the pandemic limited my time out and about. They sit in my drawer, safe and sound, awaiting their next appearance.

Over the years, I have accumulated quite a collection of corsets. Now that google and internet shopping allows me to find corsets in the plenty, I have to limit myself. Needless to say, corsets not only have given me the allure I was looking for, but they gave me many instances of laughter.

There was this one time a friend of mine wanted to try on one of my corsets. I brought the one she wanted to try on and we gave it a go. She laid on the floor as I laced the back up. Mid-try-on, her grandmother walked into the room. Visually it had to be absolutely hilarious. I was straddled over her, sitting on her butt, a leg on each side, her face down with her arms above her head and us yelling at each other. We heard the door open and silence followed. Her gram looked at us for a moment. We looked back. She slowly backed out of the room and closed the door. Looking at each other for a few seconds in continued silence, then we erupted in laughter.

I try to write what my mind tells me to, but sometimes my heart gets in the way...

More stories from NoShameIn / Tee Mee and writers in Styled and other communities.