United Against All Forms of Terror

MP
by Matthew Primous 11 months ago in history

Studying in remembrance of the War on Terror 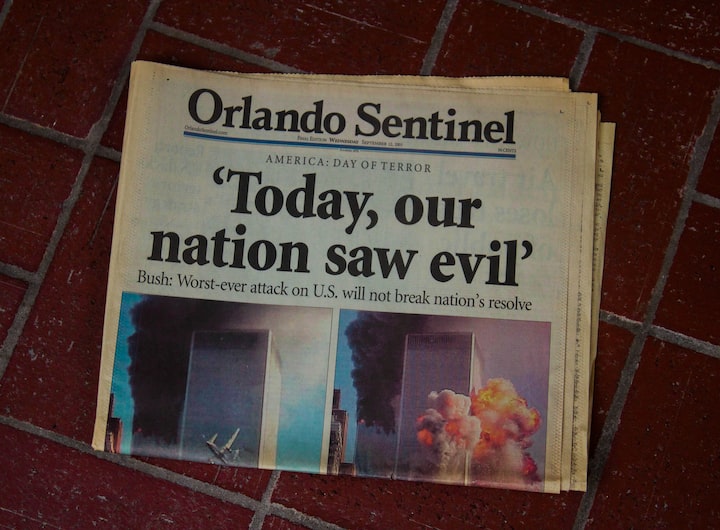 Photo by Aidan Bartos on Unsplash

As we looked back on this infamous day, a day of dread, and a day of terror, we must be united against all forms of terror in the world. Wherever there is terror, that should be the target of America and its allies to ending that threat. As a superpower, we must recognize our strength and influence. There is no country like America and America was forged to lead the world. Our founders wanted us to show the world how to govern and to mend our destiny with nations and peoples who need us and respect us. We can no longer be blinded to our influences and we must be careful about who we allied ourselves to. With our alliances, we can free people and with our alliance, we can bound people.

America has roots in the world's philosophies, we were influenced by France in building our government. France's philosophers came up with the idea of three branches and representative democracy from Ancient Greece who was the first to prove democracy as the government of the people, where all citizens vote on who to lead and pledge to unite no matter what, whether war or peace. Even Ancient Roman influence America because they showed the power of diplomacy and eloquence in governing which made them last for a thousand years. As our first ally, France helped incredibly with reinforcement and reviving our war efforts. This is when America knew its power in friendship, the power to win wars, and lead. We must rely on our friends and our allies to help make us a better democracy protecting our people. We must stand behind the inspiration, French literature-inspired at the time of the Revolutionary War.

America has to care about its allies, advocating through the institution it was given. The United Nations made to forge a friendship and govern the world. Our participation must be democratic. America could not prosecute the war criminals alone because we learned throughout history that this only causes resentment and revenge. When we united, seek the good of our fellow allies above money we are being a light. After World War 2, we lighten the load on the former Axis and gave them a chance to repay. We should do this with our allies especially to preserve their loyalty. We cannot simply give overbearing edicts to countries that have less than us. We have to want to make them like us as is their wish to be like America in their way. Nations looked up to America, we inspire the world and the fight for freedom. When we make the standard high and overbearing, we lose the inspiration that pulls us all together. Some countries have been burden with the pain of discrimination for hundreds of years and we have to take part in the responsibility because America's allies could have benefited from this maneuver. America must show itself to be redeemable. Our creed demands that we answer to what we have done in government and society whether within America or around the world. When we turn our backs on the country that need an economy, schools, and hospitals, it has a great impact on the future of the world. America and its citizens carried weight and we must never forget our worth and how important it is to do something right. We are reminded in history for instance on the Vietnam War and how it could have been prevented if the President would have welcomed a new eager leader of a nation called Vietnam at the League of Nations. Tragedy can be prevented if the world united and come together if America united and come together and lead the world towards greater peace which is its purpose and rightful place in history.