Top 10 Interesting Warplanes With The World's Most Ridiculous Design

by Writer Tiger 4 months ago in airforce
Report Story

Warplanes are some of the deadliest weapons ever designed. They have the ability to carry huge loads and destroy entire cities. How exactly are they interestingly designed? What makes them so ridiculous? 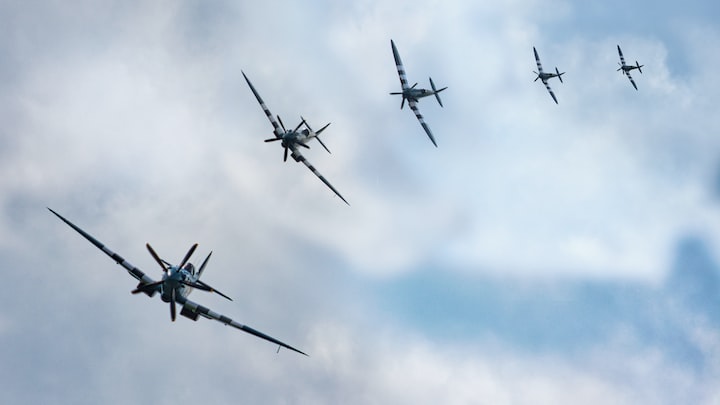 Photo by Lawrence Hookham on Unsplash

Warplanes are some of the deadliest weapons ever designed. They have the ability to carry huge loads and destroy entire cities. How exactly are they interestingly designed? What makes them so ridiculous?

The history of warplanes goes back to World War I, when airplanes were used as the first bombers. Since then, aircraft have become much more advanced and now perform a variety of tasks, from surveillance to attack.

Aircraft designers spend years developing new designs that are both efficient and effective. In this article, we'll take a look at the most interesting designs of warplanes and see how they've evolved over time.

The X-36 was built at a 28% scale of a prospective fighter and was controlled by a pilot in a ground-based virtual cockpit with a view provided by a video camera mounted on the aircraft's canopy.

For control, a canard was used in front of the wing, as well as split ailerons and an advanced thrust-vectoring nozzle for directional control. The X-36 was unstable on both the pitch and yaw axes, so an advanced digital end-to-end control system was used to provide stability.

It first flew on May 17, 1997, making 31 successful research flights. It's handled very well and the program is reported to meet or exceed all project goals. McDonnell Douglas merged with Boeing in August 1997 as the test program continued; The aircraft is sometimes referred to as the Boeing X-36.

In the 1930s, Charles H. Zimmerman was a prominent aeronautical engineer who advocated the concept of "discoidal" aircraft, dubbed the "Zimmer Skimmer", and worked on various projects on his own and with the Vought company. After testing using scale models, including a remote-controlled, electrically powered large-scale model dubbed the Vought V-162, the US Navy approached Zimmerman and offered to fund further development. Data and concept documentation were given to the Navy in 1939, and wind tunnel tests were completed on full-scale models in 1940-1941.

The original prototype, called the V-173 (Flying Pancake), was made of wood and canvas and featured a traditional, fully symmetrical airfoil (NACA 0015). Designed as a "proof of concept" prototype, the initial configuration V-173 was built as a lightweight test model powered by two 80 hp (60 kW) Continental A-80 engines spinning F4U Corsair propellers. These were replaced by a specially modified pair of 16 ft 6 in three wing units. A long, stable mainframe coupled with a small tailwheel gave the aircraft a 22° "nose high" angle.

The Dornier Do 31 is an experimental vertical take-off and landing (VTOL) jet-propelled transport vehicle designed and manufactured by West German aircraft manufacturer Dornier.

The development of the Do 31 was primarily driven by an intense interest in the purchase of short takeoff and vertical landing aircraft (STOVL) capable aircraft by the German Air Force. Such ambitions received further support from the publication of NATO specification NBMR-4, which called for a VTOL-capable tactical support aircraft to be operated in conjunction with the EWR VJ 101, a West German VTOL attack aircraft designed under NATO contract. A total of three aircraft, two flight-capable and one static fuselage, were built and used for testing. On February 10, 1967, the Do 31 made its maiden flight; The type's first hover flight took place in July 1967.

In addition to conducting test flights, Dornier frequently showed Do 31 prototypes to officials and the general public, as at the 1969 Paris Air Show. Several world records have been set by the genre during its limited flight career.

The Avro Canada VZ-9 Avrocar was a VTOL aircraft developed by Avro Canada as part of a secret US military project conducted in the early years of the Cold War. Avrocar aimed to take advantage of the Coandă effect to provide lift and thrust by blowing exhaust from the edge of the disc-shaped aircraft in a single "turbo rotor". It looked like a flying saucer hovering in the air.

Originally conceived as a fighter-like aircraft with very high speeds and altitudes, the project was scaled back repeatedly over time, and the US Air Force eventually abandoned it. The development was later taken up by the US Army for a tactical fighter aircraft requirement, a type of high-performance helicopter. In in-flight tests, the Avrocar proved to have unresolved propulsion and stability issues that limited it to a degraded, underperforming flight envelope; then the project was canceled in September 1961.

The Lockheed XFV emerged as the result of a bid by the US Navy in 1948 for an aircraft capable of vertical take-off and landing (VTOL) on platforms mounted on the aft decks of conventional ships. Both Convair and Lockheed competed for the contract, but in 1950 the requirement was revised and a call was made for a research aircraft that could eventually evolve into a VTOL ship-based convoy escort fighter. On April 19, 1951, two prototypes under the designation XFO-1 were ordered from Lockheed (the company name was Model 081-40-01). Shortly after the contract was awarded, the project designation changed to XFV-1 when the Navy's Lockheed code was changed from O to V.

The Douglas X-3 Stiletto was a 1950s United States experimental jet aircraft with a slender fuselage and long tapered nose, manufactured by the Douglas Aircraft Company. Its primary mission was to investigate the design features of an aircraft suitable for sustained supersonic speeds, which included the first use of titanium in main fuselage components. Douglas designed the X-3 with a maximum target of around 2,000 mph (3,200 km/h), but it was severely inadequate for that purpose and could not even exceed Mach 1 in level flight. Although researching aircraft Lockheed designers used data from X-3 tests for the Lockheed F-104 Starfighter, which uses a similar trapezoidal wing design in a successful Mach 2 fighter.

The Blohm & Voss BV 14 starboard plexiglass glass crew gondola was very similar to the one found on the Fw 189 and housed the pilot, observer, and rear gunner, while the port-side fuselage protrudes smoothly from the BMW 132N radial.

At first glance, the placement of the weight might have caused a tendency to roll, but the weight was evenly supported by being lifted from the wings.

In terms of thrust and drag asymmetry, countering the induced yaw was a more complex issue. It is calculated that at low airspeed it is mostly attenuated due to a phenomenon known as the P factor, and at normal airspeed, it has proven to be easily controlled by trimming.

The XB-42 is an all-metal twin-engine mid-wing aircraft. It has two three-bladed counter-rotating coaxial thruster propellers driven by two independent five-section shafts. Torque from the motor was transmitted to the planetary gear at the tail of the fuselage. The propellers could be adjusted in the wing position, and it was also possible to shoot them in flight in case they were urgently separated from the car by the crew.

The XB-42 was equipped with two V-1710-125 inline twelve-cylinder liquid-cooled piston engines. They were located in the fuselage just behind the cockpit. A bomb bay was placed under the engine compartment. The fuselage was given maximum refinement and licking in terms of aerodynamics, and a thin wing with laminar blades was applied. The air intakes of the engines and cooling systems were located on the wing finger closer to the fuselage. Due to the lack of free space in the fuselage, machine-gun slots with cartridge boxes were placed in the wing. The remaining volume of the wing is occupied by fuel tanks. The cruciform feathers with the abdominal keel reliably protected the propellers during takeoff and landing.

The XB-42 chassis is built according to a three-bearing scheme with front support. Due to the small thickness of the wing, the landing gear of the aircraft was retracted into special recesses on the sides of the fuselage.

The crew consisted of three people: two pilots and a navigator-scorer. The navigator-bomber was located in the front cockpit, closed by a plexiglass nose bubble. The commander and co-pilot sit side by side under teardrop-shaped lanterns placed symmetrically with respect to each other. If necessary, pilots can switch from one cabin to another during flight.

Born in 1900, Luigi Stipa developed the design of the Stipa-Caproni aircraft in 1932. The main idea with which the project was carried out was the assumption that a propeller placed in a conical tube would work much more efficiently. Stipa spent several years mathematically calculating optimal design parameters for future aircraft.

The main material for the manufacture of the aircraft was wood. The tests were conducted by test pilot Domenico Antonini. The designer's calculation was largely correct. The propeller placed in the tube provided more thrust, the aircraft was very quiet and stable in flight, quickly gaining altitude. The descent speed was only 68 km / h.

However, a large pre-resistance nullified all the advantages, so the idea was not developed further. However, the unusual design has been studied in detail all over the world.

Video of X-29 maneuvers in the air (NASA)

This experimental aircraft was created with the aim of finding new ways to improve military aviation and in connection with the opening technological opportunities in the field of electronics and composite materials. The idea for such a machine came from the Advanced Defense Research and Development Agency in 1977. For various reasons, Grumman was selected as the developer and manufacturer, receiving an $87 million contract for the production of the two aircraft in December 1981. The flight replica of the aircraft was ready by the summer of 1984.

The aircraft was built according to the “duck” scheme, with a fully movable front horizontal tail (PGO) in the form of a trapezoid and a negative sweep wing (–30 °). The root part of the wing in the tail section passes into a long stream, ending with the wings, which are included in the aircraft's continuous aerodynamic control system. The wing, made according to a biplane scheme with a sheath made of composite materials, has a relative elongation of 4, a contraction factor of 0.4 and a mass of 363 kg per plane. The cockpit front fuselage is derived from the F-5.

I write articles on Psychology, Technology, Blockchain and information. Most of my time is spent researching and getting the right information.

More stories from Writer Tiger and writers in Serve and other communities.