by ray richmond 19 days ago in veteran 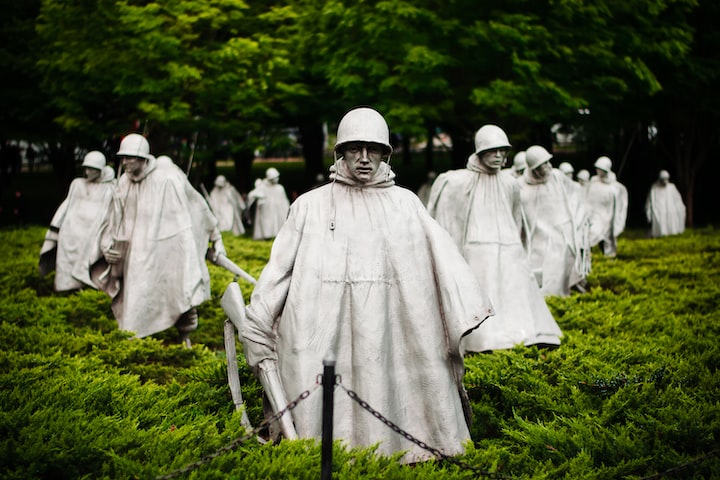 Photo by Brittany Colette on Unsplash

One of the many blessings of turning ninety-two, is when my own kids and grandkids will say to me. “Yeah dad, or yeah grandpa, you might be ninety two, but you’re still cool.”

We had ten children, six girls and four boys, and twenty nine grandchildren. On hearing that we hear a lot of people say,” Did you say ten children?” And I’ll joke and say, “Yeah, and it was my pleasure.” Of course your wife better have a great sense of humor.” But them thinking I’m kind of cool might have something to do with my going back to school at ninety, and trying to learn how to read and write. It’s hard to put in words the sheer pleasure of learning how to share a small slice of your life with other fellow writers. I’ll get to my music later. Right now I’ve chosen to share with you some of my reflections on why I have come to believe that, “War is Hell”

Back in 1952, I was drafted into the army and ended up as a rifle squad leader during the Korean War. I spent the winter on a place called “Heart Break Ridge.” If that sounds familiar to some of you, it’s because Clint Eastwood did a major movie about that so called (forgotten battle) that killed thousands of young men in the age group of 18 to 21. But, I’ll save that for later. Here’s my first reflection.

In the army I noticed that most military units have a soldier affectionately called Big Boy. We had ours. He was big physically speaking, maybe six foot five and two hundred sixty five pounds. He had an hour glass shaped physic. But, what impressed us about our Big Boy was not his size, but his contagious smile and his country boy charm. He had a striking resemblance to the late actor Rock Hudson. He came across like someone who really loved everyone he met. It’s fair to say, everybody loved Big Boy.

My responsibility back then was leading a nine man rifle squad. Our primarily mission was to go on “Battle Patrols.” We would advance into enemy territory until we were fired upon by the North Korean enemy forces that held the higher ground. Then we would radio back their locations and let our artillery support or our navy jet fighter pilots finish the fight.

One early summer day we were on a patrol in the middle of a rice paddy and suddenly we came under a fierce enemy mortar attack. The shells were raining down on us. To make it worse we were walking on frozen ground that was thawing out and we found ourselves in mud up to our knees that smelled like an overloaded out house. The farmers back then used human waste for fertilizer. As the shells hit the ground the explosions would lift blankets of muck that would almost bury us alive. Then I heard screams for a medic , that’s when I saw my friend Big Boy sinking into the swamp. He was covered with mud and bleeding profusely from a mortar shrapnel wound in his abdomen. Three of us waded over to him to try and stop the bleeding, it was too late, he died in our arms. All we could do was build a stretcher out of two rifles and our shirts and carry him out of harm’s way. I remembered a general who once quoted saying , that “War Is Hell” That’s how we felt that day after losing our friend. As I said everybody loved “Big Boy.” May his soul rest in peace.

I'm ninety-two and started two years ago learning how to write short stories both fiction and non-fiction. And need help, but love it. I have been published in "Good Old Times" magazine.

Receive stories by ray richmond in your feed
ray richmond
Read next: 10 Ways War Has Changed Through History